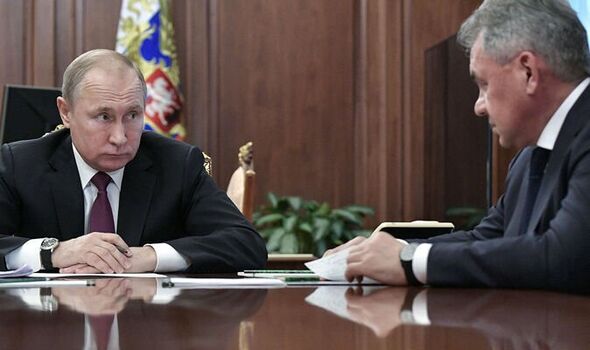 Vladimir Putin’s armed forces have been accused of either deliberately targeting civilians or showing a flagrant disregard for human life since the war began six months ago. Rather than out of compassion, Western intelligence officials believe the stalling of the Russian advance is due to a depletion of much of its fighting force.

Speaking at a meeting of defence ministers of the Shanghai Cooperation Organisation in Uzbekistan, Sergei Shoigu said: “Everything is being done to avoid casualties among civilians.

“Of course, this slows down the pace of the offensive, but we are doing this deliberately.”

In the opening phase of the war, Russia’s armed forces appeared to be attempting a complete occupation of the country – though Putin has never outwardly claimed this was his intention.

However, met with a strong Ukrainian response, the invading military is believed to expended the majority of its combat force for the intervention in a matter of weeks as it took massive troop losses.

Putin later revised the aims of the invasion, focusing on the front lines to the east, in the Donbas region, and in the south near Kherson, after pulling back from the north.

In the months since, the war has shifted to one of attrition, with limited progress moving the front line.

While Russia looks to consolidate its hold on the Luhansk oblast with the help of local Russian-backed separatist fighters, Ukraine has made use of Western-supplied missiles and resistance fighters to target military installations behind enemy lines with pinpoint accuracy.