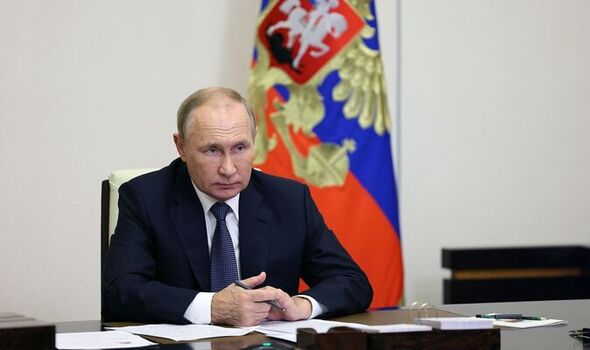 Dozens of Russian conscripts have staged an extraordinary mutiny against Vladimir Putin as experts warned that the increasingly desperate tyrant is plotting fresh outrages. It is feared the despot plans to blow up the Kherson dam, causing extensive death and destruction and framing Ukraine for the disaster.

It would cause “catastrophe on a grand scale”, said Ukrainian President Volodymyr Zelensky.

Putin is also believed to be planning “false flag” attacks on the Zaporizhzhia nuclear power plant, to which the dam’s hydroelectric station helps supply cooling water. It is feared this could come “as a prelude to tactical nuclear weapons”.

But the Russian leader’s own recruits are ­growing increasingly uneasy over the conflict, complaining about appalling conditions and threatening to turn their ire on to the Kremlin.

A video broadcast on a Telegram social media channel showed a uniformed soldier addressing at least 50 others in a forest clearing.

He berates the lack of equipment given to ­conscripts and encourages Russians to topple their rulers over the war.

It was filmed in the impoverished Tuva region of Siberia – which has suffered a particularly high death toll of troop deaths – ahead of the unit’s deployment 3,200 miles away.

To applause, the reservist seems to ask his ­leaders bluntly: “If there are no people like us, who will you be in authority over? Who are you going to make all your speeches to? You no longer look like a source of power in our eyes. Perhaps we people should all get together and decide you are of no use.”

While there have been a raft of individual ­conscripts complaining about being drafted to Ukraine, this is the first occasion where a whole platoon has taken a stand.

And it is another example of the challenges ­facing desperate Putin.

His ever-decreasing list of conventional options was further evidenced by warnings from Kyiv that Russia is preparing an attack on the dam.

And last week a hastily convened top-level meeting in Washington DC between Defence Secretary Ben Wallace and his US counterpart Lloyd Austin discussed the growing possibility that Russia will deploy both tactical nuclear and chemical weapons.

Justin Crump, of the Sibylline strategic risk group, said: “One of the reasons Ben Wallace went to the US was to agree with Washington what our nuclear thresholds would be.

“Putin knows there will be a reaction by the West, so he will still want plausible deniability when it comes to using tactical nuclear weapons. The most likely option will be doing something to the Zaporizhzhia nuclear power plant as a prelude.

“It’s an important asset for Russia and deemed to be on its soil.

“Causing a nuclear incident and a massive radiation leak at Zaporizhzhia and blaming the Ukrainians – which is comparatively easy to do – would blur the line of response by the West.”

This could, in part, be achieved by attacking the Kherson dam, which supplies Zaporizhzhia with its cooling water.

President Zelensky says that Russia has already mined the dam.

And the Institute for the Study of War, an independent US-based think-tank, suggested Russia is “likely continuing to prepare for a false-flag attack” on the hydroelectric plant in Kherson, by creating “information conditions” for Russian forces to blow up the dam after they withdraw.

President Zelensky told EU leaders by video on Thursday that Russia had already destroyed more than a third of Ukraine’s energy infrastructure, with the aim of creating as many problems as ­possible over the winter months.

Moscow has started to set the scene, with a forced evacuation of civilians from Kherson. It followed an announcement by the Kremlin’s ­military commander in Ukraine, Gen Sergei Surovikin, alleging Ukraine could be ­planning “banned methods of warfare”.

Mr Crump added: “The potential destruction of the plant and the dam reflect an increased desperation in Putin’s options and signify Russia feels it cannot hold Kherson in the long run. Flooding that area will stop Ukrainians from launching an assault across the Dnipro river but it will also contain Russian forces for the foreseeable future.”