Trains will stop running on Christmas Eve as early as 8am because of strikes by the militant RMT union.

As a result rail bosses are advising families to set off the day before in some parts of the country if they want to guarantee seeing loved ones this Christmas.

The last London-bound train from Edinburgh will set off at 8am, while the final service in the opposite direction will leave at 11am.

The last Newcastle-bound train from the capital will leave at 11am, with the last service going the other way at 10.22am. The last London-Liverpool service will be at 12.34pm and the final London-Leeds train at 12.03pm. 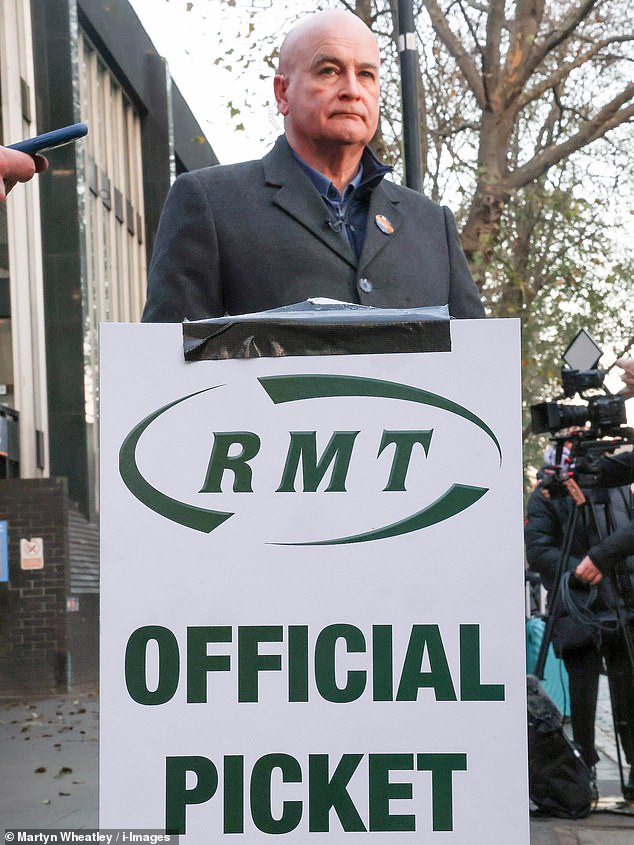 The RMT has rejected a pay deal worth 9 per cent over two years, with a guarantee of no compulsory redundancies until January 2025. Pictured: RMT boss Mick Lynch

The last train to Glasgow from London will leave at 12.22pm, with the last in the opposite direction at 10.40am. The last London-Manchester service will go at 12.48pm and London-Birmingham at 1.03pm. There will be no direct trains between the capital and Sheffield or Nottingham. It blows a hole in the claims of RMT boss Mick Lynch, who said his union’s Christmas Eve strike would have no impact on travellers because it wasn’t beginning until 6pm, when engineering works begin on many parts of the network.

The union’s members will walk out from 6pm on Christmas Eve until 6am on December 27. Network Rail boss Andrew Haines said: ‘RMT suggestions that their planned strike action over the festive period is “not targeting Christmas” would be laughable were the consequences not so painful to so many people.

‘I am so sorry our passengers are having to bear the brunt of the RMT’s needless strike action when a fair offer is on the table and only a third of the workforce have rejected it. Two of our three trade unions have already accepted and the RMT needs to think again.’ 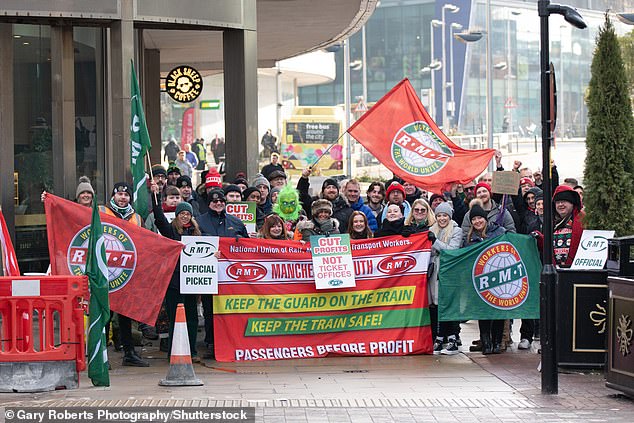 The RMT has rejected a pay deal worth 9 per cent over two years, with a guarantee of no compulsory redundancies until January 2025.

It came as rail passengers were hit with last-minute cancellations because of an overtime working ban which began yesterday and will last until January 2. It is part of the union’s industrial action campaign and means there could be hundreds of last-minute cancellations over the next few weeks because several operators rely on overtime working to run a full timetable. The action has been branded a ‘stealth strike’.

One rail operator was forced to cancel 70 per cent of its services on Sunday, while South Western Railway (SWR) has closed 40 stations in London and the wider South until the New Year.

Trains connecting London to commuter towns such as Farnham, Guildford and Woking have also been reduced. Services which normally run at least every 15 minutes are being reduced to hourly ones. 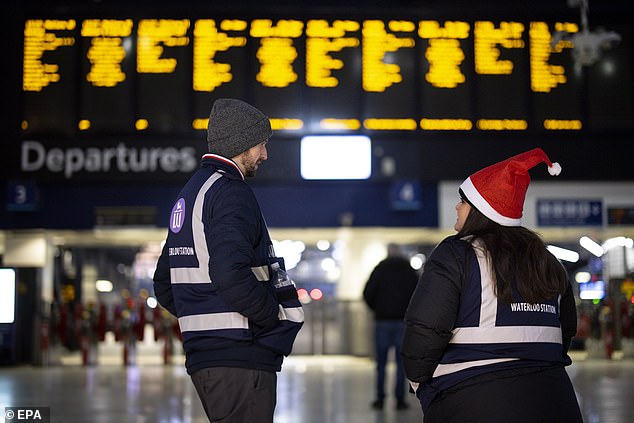 Network Rail boss Andrew Haines said: ‘I am so sorry our passengers are having to bear the brunt of the RMT’s needless strike action’

And some were not stopping at certain stations yesterday over fears of overcrowding due to fewer trains. Stations in the North, including Sunderland, will also close this week.

Lib Dem MP Munira Wilson said: ‘This is a kick in the teeth for commuters and our hospitality industry. Chaos, delays and misery are part of the daily struggle for those wanting to get into the capital.’