A Turkish vet has saved the life of a dog and almost her entire litter of pups after digging them out from a landslide with his bare hands.

Soner Büyümez was working on a farm in a remote region of Turkey shortly after the landslide had occurred earlier this month when he heard an animal howling for help.

The vet ran towards the site of the landslide and quickly stumbled upon a stray dog who was buried in a small burrow up to her neck in dirt, unable to move.

‘I saw a dog was trapped in the ground. Only her head remained [above the soil],’ Büyümez told The Dodo, adding that the animal was in considerable distress.

Scrabbling at the dirt with his bare hands and a small shovel, the heroic vet was able to pull the mama dog to safety, unquestionably saving her from a slow and painful death.

But the stray continued to howl after she had been freed despite her lack of injuries, leading Büyümez and a colleague to suspect that perhaps another animal had been caught in the sudden earthslip. 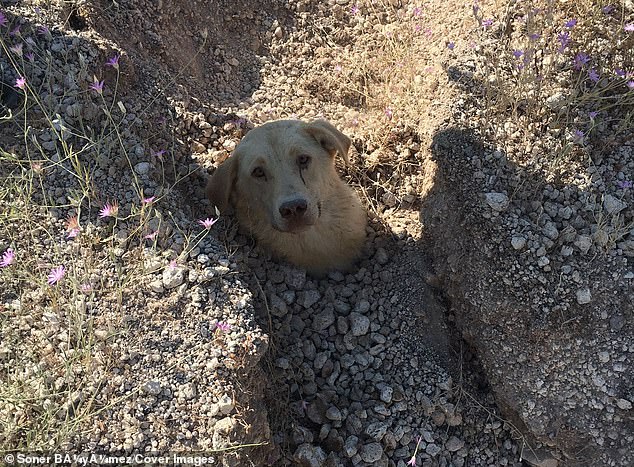 ‘There had been a landslide. I saw a dog was trapped in the ground. Only her head remained [above the soil],’ Büyümez said 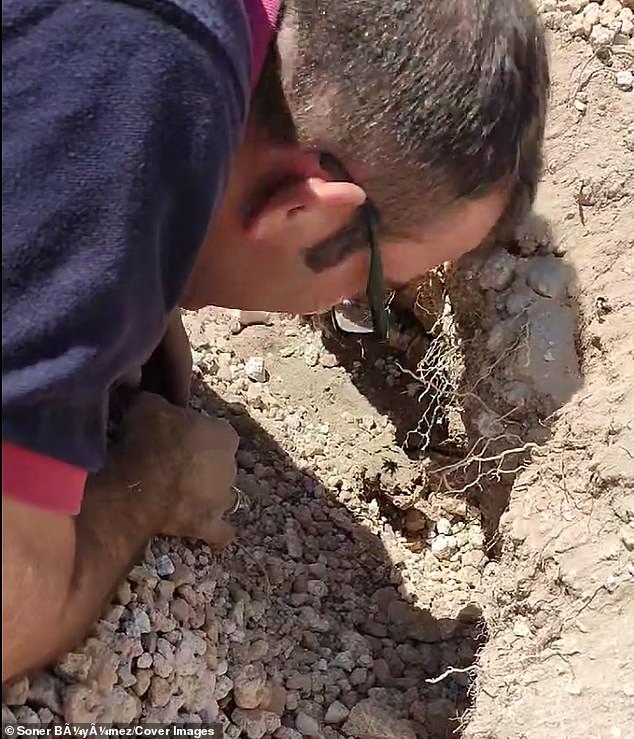 After freeing the stray dog, the vet quickly understood that she wasn’t fearing for her life alone. He quickly returned to the burrow and kept digging for her pups 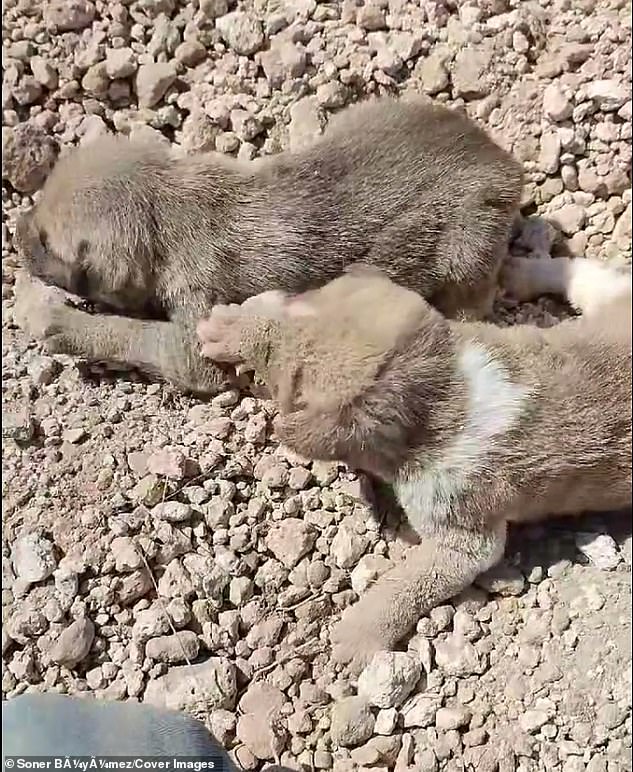 After minutes of fervent digging, the pair came across a tiny body, whose fur was matted with dirt

Knowing they couldn’t leave without continuing their search, Büyümez and his co-worker got down on their hands and knees and continued to haul soil and rocks out of the caved-in burrow.

After minutes of fervent digging, the pair came across a tiny body, whose fur was matted with dirt.

Fearing the puppy dead, Büyümez desperately pulled back the remaining earth to release the hound, which to his delight appeared to be largely unhurt.

Going back for more, the pair of good samaritans kept digging for over two hours until they managed to free a total of eight pups, believed to be the entire litter of the lone stray.

One of the furry canines had sadly died, but the mother dog was eventually reunited with seven healthy and strong little furballs, thanks to the quick thinking and hard work of Büyümez and his colleague. 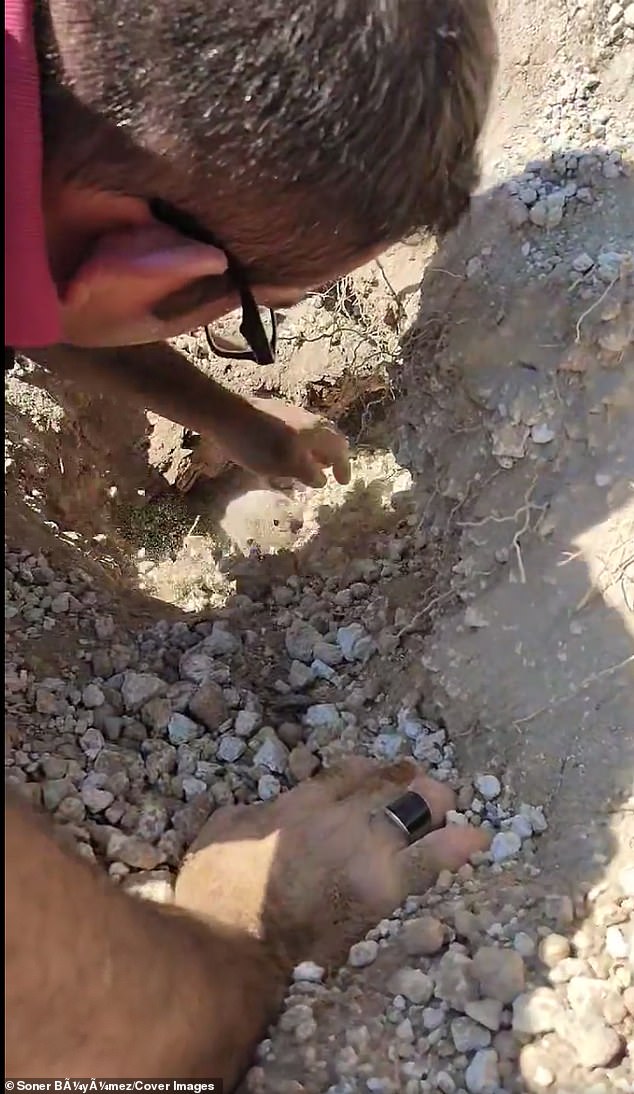 Fearing the puppies dead, Büyümez desperately pulled back the remaining earth to release the first hound, which to his delight appeared to be largely unhurt 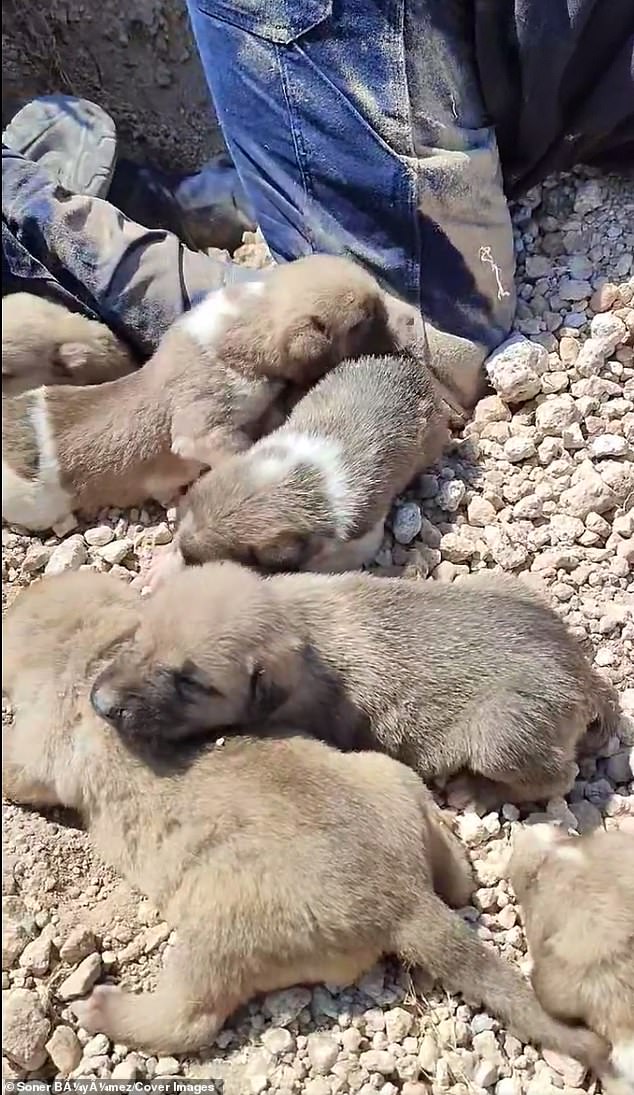 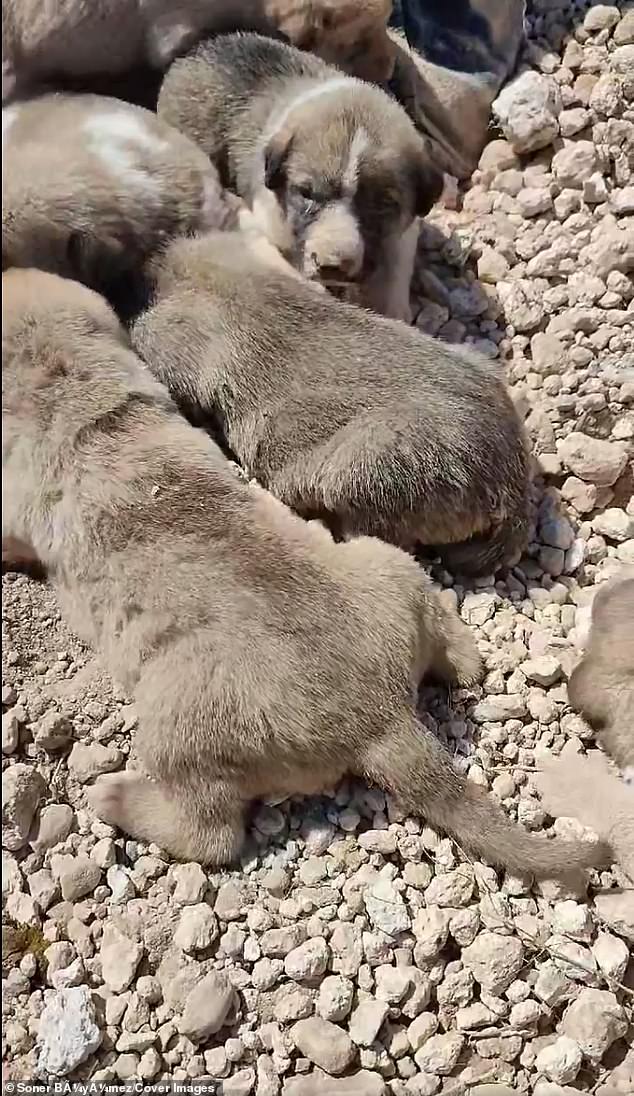 After pulling off the successful rescue, Büyümez said he believes the mother dog was somehow surviving on her own along with her pups, having managed to carve out a little home for her family before the burrow caved in amid the landslide.

Fortunately the pooches will no longer have to fend for themselves, as the vet declared he would take them in and raise them as his own.

‘Their general condition is very good. The mother and her puppies are protected,’ Büyümez said. ‘I will care for them as my own.’