Melbourne businesses have hit out at the Victorian government's staged coronavirus recovery plan, accusing it of being incomplete, unrealistic, and potentially devastating for businesses reliant on much-needed Christmas trade.

Struggling operators are now considering whether they will need to cut jobs as a result of the extension of the state's business closures and Melbourne's lord mayor Sally Capp has called for an urgent intervention to help traders on the brink of collapse. 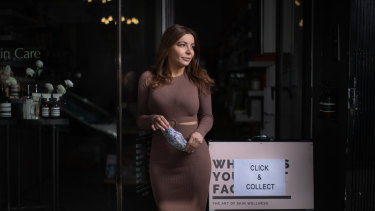 Melbourne business owner Sia Psicharis has called for beauty salons to be able to open in October.Credit:Simon Schluter

Large retailers are concerned about the potential ‘double whammy’ of both the extended trading restrictions and the reduction of the JobKeeper program in late September, as many will be ineligible under the new turnover test due to better-than-expected trading.

Announced on Sunday, the Andrews government road map out of stage four restrictions will see non-essential retailers shuttered for an additional six weeks until late October, limited to just online orders in an effort to limit the virus' spread.

Caleb Brown, the chief executive of Superdry, Volley and Clarks operator Brand Collective, said the stimulus package ending was creating anxiety for retail staff, who face at least one month of closures without JobKeeper support.

"I think many retail staff are acutely aware of their company's own [JobKeeper] qualification criteria, and that's creating a lot of fear, panic and anxiety," he said.

"It's unfortunate that the governments haven't been able to work together more closely to have a more comprehensive suite of announcements, to provide the level of certainty that I think our workers and the general public are looking for."

Layoffs would be a "last resort", Mr Brown said, but the ending of the JobKeeper safety net could lead to job losses at other businesses if additional support was not provided.

Shell service station operator Viva Energy's chief executive Scott Wyatt said the company may be forced to permanently shut its Geelong refinery if the road map targets are not hit by November, putting 700 jobs at risk.

"They've provided a road map, but it's a long road map, and there are some high hurdles that we have to clear to get there," he said. "We all need a pathway out of this that we can be confident in and that seems realistic and achievable. And I'm not sure that hit the mark [with the road map]." 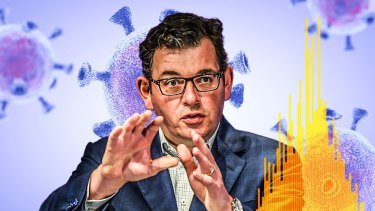 Daniel Andrews announced the path out of lockdown on Sunday.Credit:Stephen Kiprillis

Small business Ombudsman Kate Carnell said the state government's targets for reducing restrictions seemed unrealistic and may give some small business owners no other choice but to shut up shop.

In those situations, Ms Carnell said the Andrews government should "pick up the tab" for the costs of breaking leases on property or assets such as cash registers.

"It's totally unconscionable for the state government to make these decisions and then not pick up the tab for the costs that this is going to impart on on small retailers," she said.

Premier Daniel Andrews said he knew there were a lot of businesses that did not get the news they wanted in the state government's plan.

"If we could have provided a different series of steps, more things opened faster and done that safely, then, of course, that's what we would have done," he said.

"But there's no other option and I think that's well understood by every member of the government and well understood, I think, by the vast majority of Victorians."

Lord mayor Sally Capp called on the state government to urgently provide immediate additional financial assistance for businesses prevented from operating due to the restrictions.

She also called for a more flexible approach which allowed businesses to reopen sooner in a COVID-responsible way.

"I am also calling for consistency," Cr Capp said. "If the national definition for hotspots is 10 cases per day for three days, why not use this benchmark for reopening businesses and industries such as retail and hospitality?"

Mr Andrews said the government would continue to this week consult with a wide range of businesses about the type of assistance they believed would be of greatest benefit before announcing a rescue package.

"We'll be as quick as we can be, but we have to give businesses … that very direct opportunity to feed in about the types of assistance they want. Because it may vary one sector to the other. We'll do
that as quickly as we can," he said.

Mr Andrews would not comment on whether he would ask the Prime Minister to extend JobKeeper payments, saying he did not believe it was proper to lobby the government from the podium.

Sia Psicharis, who operates a beauty salon in St Kilda East, said she was preparing for more bad news ahead of Sunday’s announcement, however, she was still shocked at how "incomplete and inconclusive" the state government’s plans were.

"We’ve been closed since March and we were really waiting for something positive, but to be given this and having it all left open-ended, it was devastating," she said.

The Melbourne small business owner estimates she’s lost tens of thousands in revenue since lockdowns began in March, and is pushing for beauty salons to be permitted to open with a COVIDSafe plan once stage three restrictions are re-introduced.

Under the state government’s current plans, only hairdressers will be permitted to reopen on October 26 when restrictions ease back to stage three, with the rest of the beauty industry forced to wait another month to November 23.

"We lost Mother’s Day trade, we lost Father’s Day trade, and we were relying on the Christmas trade in November and December to roll us through our quiet time in January and February," Ms Psicharis said.

"We’ve always been known as the ‘hair and beauty’ industry, and suddenly we’ve been left behind when the hair industry has been allowed to function."

Chief executive of the Australian Retailers Association Paul Zahra had been calling for a staged reopening to begin next week and said the "incomprehensible" new restrictions would be a "death sentence" for many Melbourne retailers.

"If you took an evidence-based approach, for retailers who comply with COVIDSafe plans shopping is one of the safest activities in the COVID world," he said.

"Retailers are angry, they feel like they've been let down."

Get our Coronavirus Update newsletter for the day’s crucial developments at a glance, the numbers you need to know and what our readers are saying. Sign up to The Sydney Morning Herald’s newsletter here and The Age’s here.