Right Said Fred frontman and anti-vaxxer Richard Fairbrass has contracted Covid-19 – but still has no intention of having the jab.

The I’m Too Sexy singer, 67, fell ill last Saturday and was taken by ambulance to Park Hospital in Slough, Berkshire, needing oxygen because he was struggling to breathe.

After spending four nights under the watchful eye of doctors, he is now recovering at home. His Covid battle comes six months after he branded the vaccine a ‘scam’.

Speaking exclusively to MailOnline outside his home in Windsor, Richard said: ‘I’ve had a bit of Covid, it wasn’t too bad. I was a little breathless, I felt very tired. 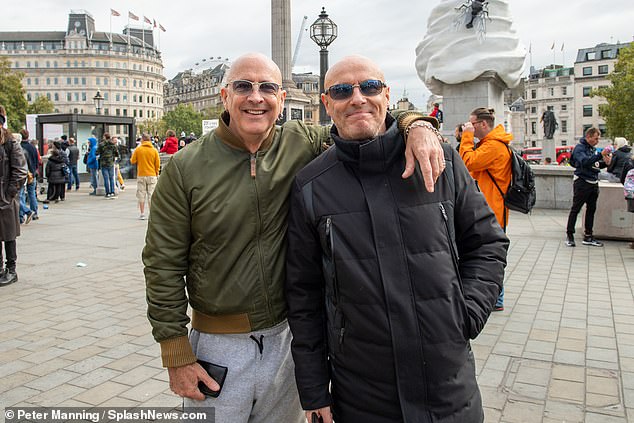 Right Said Fred brothers Fred Fairbrass and Richard Fairbrass at an anti-lockdown demonstration in Trafalgar Square in London on September 26, 2020 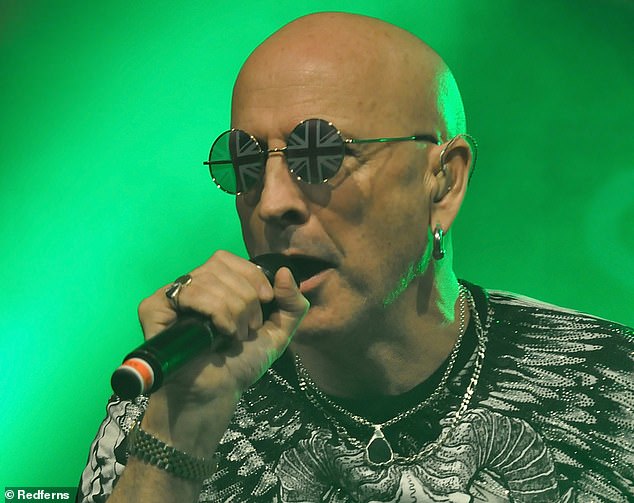 ‘But full credit to the NHS, they were non-judgemental and very open to how you wanted to be treated – and my treatment was just keeping my oxygen levels up for a week.’

But despite contracting the killer bug, Richard insists he will still not have the vaccine.

England’s chief medical officer has urged people not to delay getting their Covid-19 vaccine, saying there are some ‘very sick’ young adults in hospital with the virus.

Professor Chris Whitty branded it ‘stark’ that the majority of Covid patients have not had a jab. He said he had spent four weeks working on a Covid ward and told how many ‘regret delaying’ their vaccination.

His comments came as new figures showed that 55 per cent people in hospital with the Delta variant – which is dominant in the UK – have not been jabbed.

The data from Public Health England (PHE) also shows that 74 per cent of people under 50 in hospital with the variant had not been vaccinated.

Almost two thirds of people in the same age group who died in England with the Delta variant were not vaccinated against the virus, the figures show.

The UK’s vaccine programme has so far seen around three-quarters of adults in the UK double-jabbed. But nearly three million young adults have not had a first dose, according to figures published earlier this week by the four health agencies.

There has been a concerted effort to get as many people vaccinated as possible, with 16 and 17-year-olds getting letters and text reminders this week inviting them for a jab.

The PHE data, published on Friday, showed there were 1,189 deaths up to August 15 of people who were either confirmed or likely to have had the Delta variant and who died within 28 days of a positive test.

While the majority of deaths with the variant were in people aged 50 or over, the under-50s account for more when it comes to hospital admissions.

He said: ‘This vaccine is only for experimental use, it’s on trial until 2023, there is no long-term data on it – anyone who takes it is foolish. Come 2023 and everything is fine, I’ll do it then. I’m absolutely not going to have one now.’

The Pfizer-BioNTech vaccine has been given an ‘estimated study completion date’ of May 2023, but it is standard practice for safety monitoring to continue after a jab is approved for use.

Richard sparked controversy in February with his comments on the vaccine in which he admitted turning down the jab in fear it wasn’t ‘kosher’.

The nineties star and his brother Fred, who sold over 30million records during a career spanning three decades, also attended an anti-lockdown protest in Trafalgar Square last September and supported anti-mask campaigners via the duo’s official Twitter account.

However the pair refute suggestions they are ‘Covid-deniers’.

Speaking about the vaccine earlier this year, Richard said: ‘I believe the whole thing is a scam. I really do. I’ve been asked to have my vaccination, but I have refused.

‘I look at it in the same way that people were advised to keep smoking because it was good for the throat. Or, ‘Isn’t asbestos great — it’ll keep your farm clean’.

‘I’m not against the vaccination. If you want to do it, that’s fine. I have decided to wait a year or two to make sure everything’s kosher. That’s all it is.

‘But interesting enough, I’m not even allowed to say that these days. Even caution now is a sin.’

He also criticised the care home system for allowing elderly patients to return following their release from hospital at the start of the pandemic.

Fairbrass added: ‘People ask me, ‘Do I not buy into the fact that it’s about protecting vulnerable people?’ But if it was about vulnerable people we wouldn’t have been filling the care homes with people from hospital, right in the early days.

‘There’s an assisted living centre near me. There’s a lady there that I know really well. We’ve become friends in the last three years. She’s 81. Her name is Grace.

‘Their Christmas party was cancelled. The dementia patients haven’t been out of their rooms since March and it’s been horrific for them.

‘The importance to people at that age of communication, of simple human contact cannot be overstated and it’s a kind of wickedness that is blind to that reality.’ 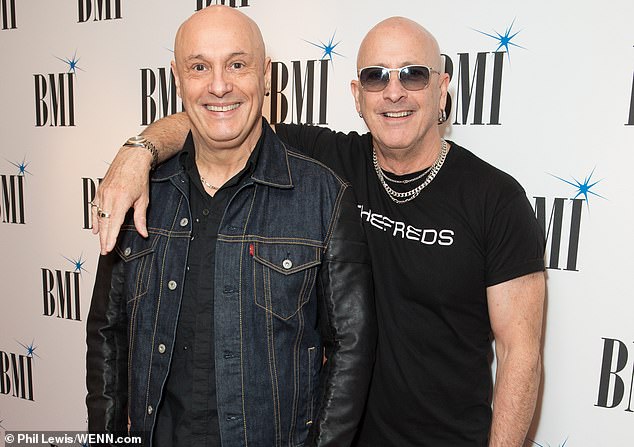 Fred and Richard Fairbrass, pictured in 2018, refuted suggestions they are ‘Covid-deniers’ 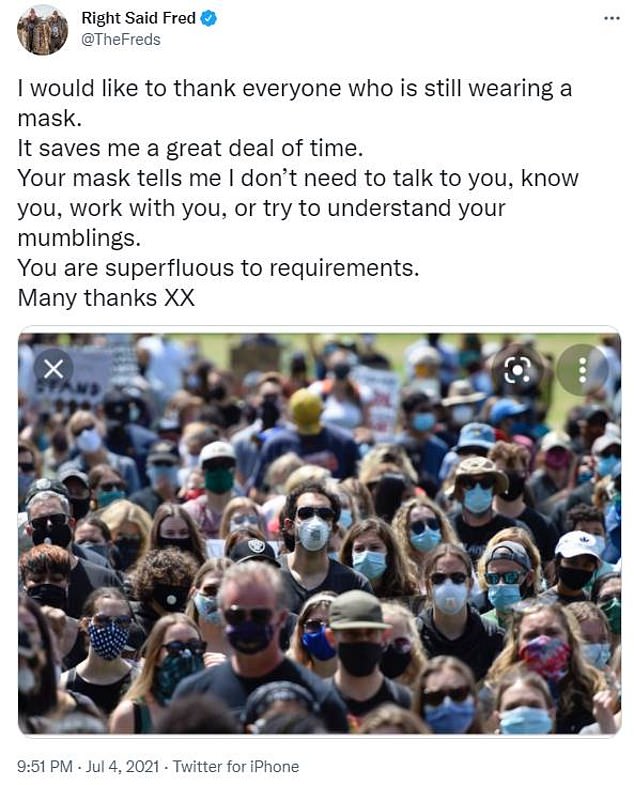 ‘It saves me a great deal of time. Your mask tells me I don’t need to talk to you, know you, work with you, or try to understand your mumblings.

‘You are superfluous to requirements. Many thanks.’

The account then retweeted dozens of anti-mask statements and links, referred to the ‘cult-of-Covid’ before being slated by social media followers for their views. 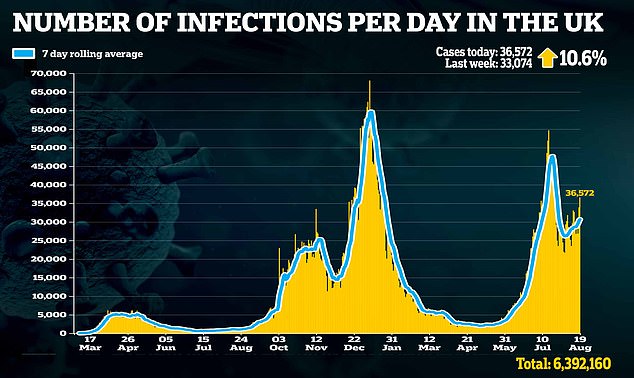 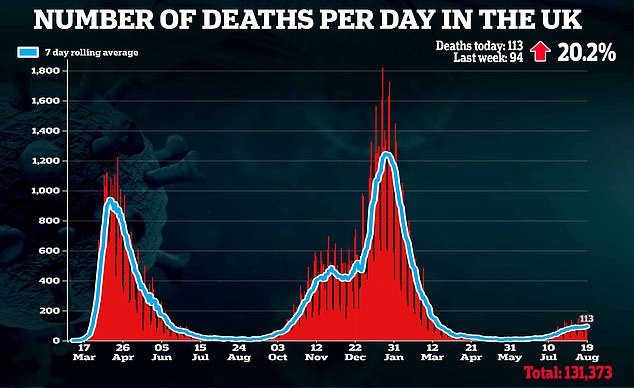 The duo admitted the tweet ‘got the bed-wetters at it’ and said ‘the masked army are out in force.

They later tweeted: ‘So many angry tweeters today. You’ve complied for 16 months, followed nonsensical rules implemented by an immoral and corrupt government. You should be angry at yourselves.’

Richard also told MailOnline that Right Said Fred will not play any live shows while audiences are segregated.

He added: ‘Music is a community, it’s about bringing people together. Any artist who doesn’t get that has no business being on stage.’

Man critically injured after being struck by vehicle in North York: police