A rogue plumber who used the false name ‘Lee King’ has been jailed for 10 months after a number of botched home renovations.

In one case, prosecutor Ieuan Bennett told the court Owens charged one family almost £17,000 for refurbishment work on their house but only carried out a small amount of demolition and digging worth a couple of hundred pounds.

Mr Bennett said a quote of £33,750 was agreed with victim Sam Hulland and a deposit of £16,875 was handed over for the work in Rumney, Cardiff.

But after a couple of weeks the family became concerned that ‘little constructive work’ seemed to have been done on site, save for some demolition and some holes being dug.

An independent surveyor later examined the work and conclude it amounted to ‘simply a few hundred pounds’ worth and that the Hullands had been ‘overcharged by at least £16,000’.

Owens’ case was adjourned in February after he told Judge Philip Harris-Jenkins about a skull injury – claiming he was shot in Bosnia while in the Royal Marines.

But he actually suffered the injury when he was attacked with a golf club in Barry.

Judge Harris-Jenkins said he did not accept the word of people who were ‘fraudulent in their activities’ without proof.

His case was re-listed on Thursday and prosecutor Mr Bennett presented records showing Owens was a soldier with the Royal Welsh for just over a year.

Mr Bennett said: ‘There is no indication he saw active service.’ 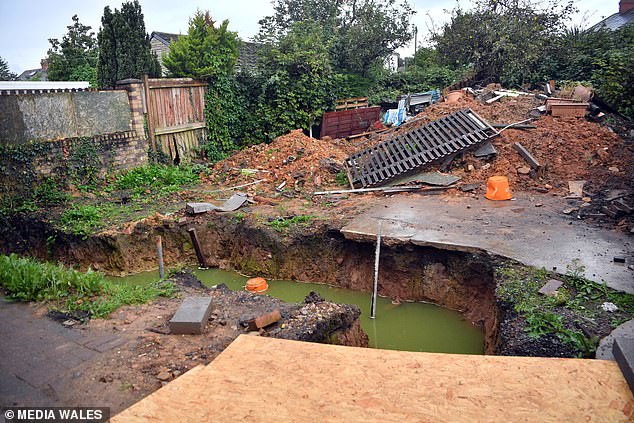 A quote of £33,750 was agreed with victim Sam Hulland and a deposit of £16,875 was handed over for work in Rumney, Cardiff. But very little was actually delivered (pictured) 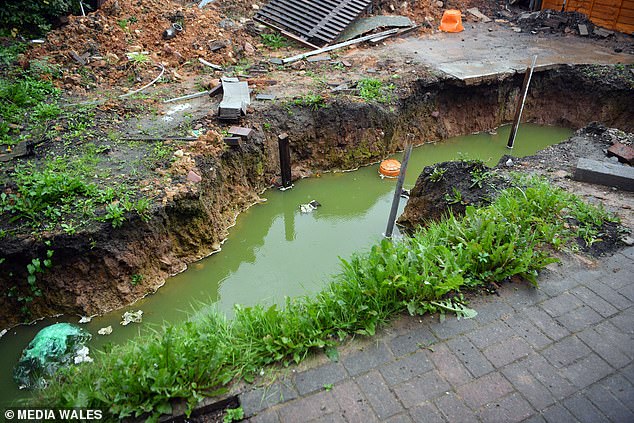 After a couple of weeks the family became concerned that ‘little constructive work’ seemed to have been done on site. Pictured:  large hole in the garden 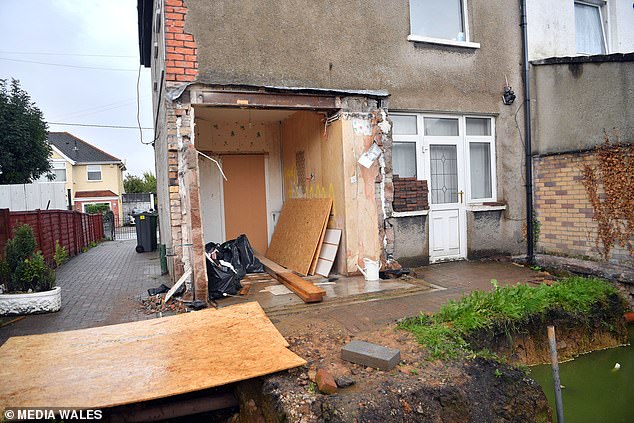 An independent surveyor later examined the work and conclude it amounted to ‘simply a few hundred pounds’ worth. Pictured: only very minor work had been done at the property 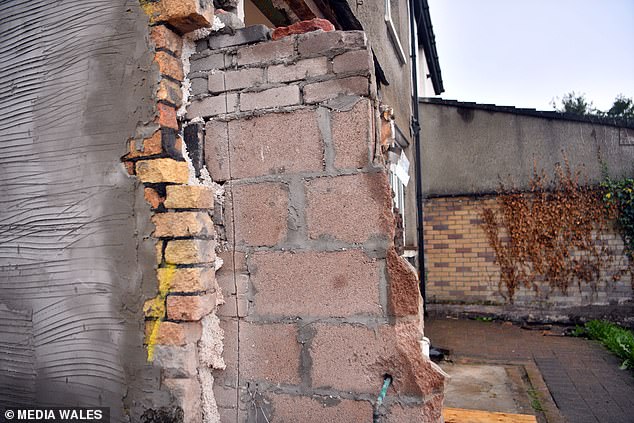 Speaking about the ordeal at his home (pictured), Mr Mulland said he was assured by Owens that it would be completed on time 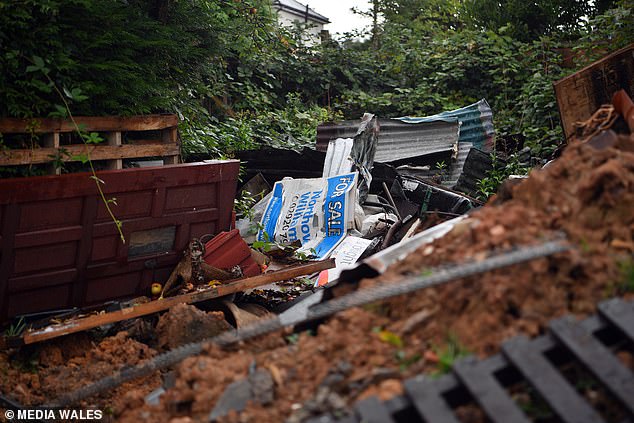 A trail of destruction: Mr Hulland says all of a sudden Owens was impossible to get hold of. He told him his mother was ill and was dying 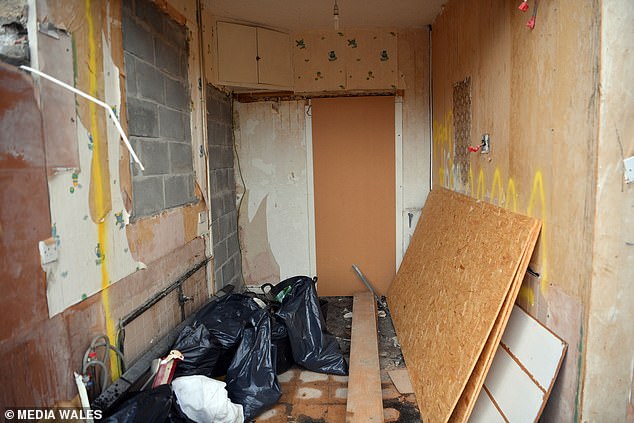 Mr Hulland has had to spend another £40,000 to complete the work on his house after it being left in a sorry state by Owens

The court heard the defendant was discharged from the Army in May 2010 for medical reasons having suffered a skull fracture.

Prosecutors said he was the victim of a ‘revenge attack’ in Barry which involved a golf club and was never on active service in Bosnia.

Owens had also claimed he was the sole carer of a young child who would have to go into care if he went to prison – which was also found to be untrue.

Sentencing Judge Michael Fitton QC said he would impose an immediate jail term instead of a suspended sentence due to the lies.

Prosecutors said the defendant charged pensioner Marion Nevison £240 to fix a simple leak in her living room and failed to supply her with the proper paperwork.

He told the woman he had been injured while on active service in Bosnia and the victim later thought this was part of an attempt to gain her sympathy and business.

Mr Bennett said there was a ‘detailed’ investigation by Trading Standards.

He called himself ‘Lee King’ when adverting as the owner of one of the fake plumbing firms and also used the name of dead friend Andrew Hansel.

Mr Bennett said the fake names were a way of trying to hide his previous convictions from customers.

Matthew Roberts, defending, told the court his client had a history of anxiety, depression and low mood.

Judge Fitton said: ‘This was a sophisticated pattern of offending involving care and forethought.

‘I am not going to suspend the prison sentence. That is the impact of the lie you told on the last occasion.’

Councillor Michael Michael, cabinet member responsible for shared regulatory services at Cardiff council, said: ‘This case and the sentence given should send a very clear message to rogue traders that their practices will not be tolerated and we will bring these matters to court when the evidence is available.

‘We advise anyone who has experienced any issues such as this to contact Consumer Advice on 03454 040506 and the case will be passed through to our trading standards team so we are able to investigate.’

‘I really trusted him’: A victim of rogue builder Owens speaks out

Sam Hulland was expecting the arrival of his third child when he started looking for a suitable builder to carry out an extension on his house.

He spoke to various builders and obtained quotes before agreeing to pay £33,750 to Cardiff Construction for a single extension on his three bedroom house on Ty-Fry Road, in Rumney.

The 36-year-old, who works as an information security officer, said he had a good relationship with Owens, who he believed was a man called Andrew Hansel.

He says after Owens provided him with a quote, they would keep in constant touch through text messages regarding house designs.

Owens would send him pictures of kitchens at B&Q and of other houses, claiming he had worked on them.

‘I really trusted him, he would always update me with what was going on and would send me pictures of kitchen designs,’ said Mr Hulland.

‘He knew we were expecting another child and reassured us the work would be completed in time.’

Mr Hulland, who was living with family in Newport at the time, agreed to bank transfer £16,875 but says alarm bells started ringing shortly after.

When he visited the house and found a sewage pipe had burst, Owens apologised and requested a further £1,500 to fix the burst pipes.

‘He was always on his own working at the property, as he knew we couldn’t live there at the time. He gave me mobile numbers of people he had done work for, but I was never able to get hold of them,’ he explained.

‘He even offered to stay at the property overnight as no one else was there, which just wasn’t needed. He tried to develop a friendship.

‘I tried to visit the property on a daily basis to make sure everything was okay and he constantly assured us everything would be okay.’

Mr Hulland says all of a sudden Owens was impossible to get hold of. He told him his mother was ill and was dying.

When Mr Hulland contacted Welsh Water, they told him the sewage work could only be undertaken by an approved contractor.

‘I had to pay another £500 for an approved contractor to carry out the work, it was tough because I was already £17,000 out of pocket,’ he explained.

‘It was worrying and stressful, it made me feel sick, dealing with this and also the arrival of my third child.

‘We were paying a mortgage on a house we weren’t living in, it was so tough. I had a feeling of anger when I saw the work, he had no feelings toward us.’

Mr Hulland has had to spend another £40,000 to complete the work on his house.

Americans Are Less Proud to Be Americans This Year