Postal workers are striking for a second day as their battle for better pay continues.

More than 115,000 staff have walked out, according to the Communication Workers Union (CWU).

Andy Furey, CWU assistant secretary, said: ‘What’s really making members angry is knowing that the managers will be getting their bonuses tomorrow – on the backs of the hard work our members have put in – while refusing to resolve pay for hard-working counter staff, supply chain and admin workers.’

‘This current senior management team have got their priorities all wrong.

‘They won’t be able to operate without the hard work and goodwill of our members and it’s about time they recognised that fact. 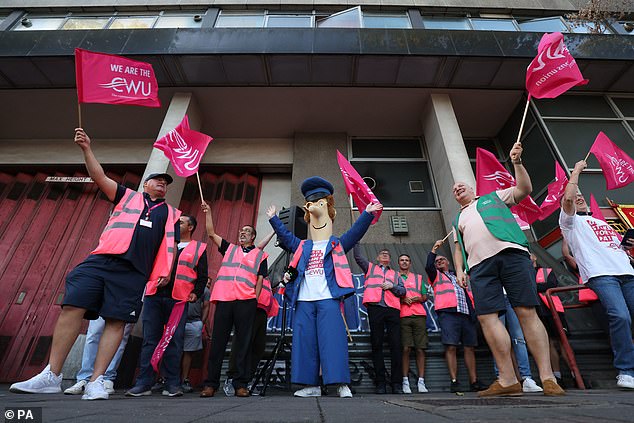 More than 115,000 Royal Mail postal workers are on strike today after the Communication Workers Union rejected a 2 per cent pay offer. Pictured: Strikers at the Royal Mail Whitechapel Delivery Office in east London, joined on the picket line by someone dressed as Postman Pat 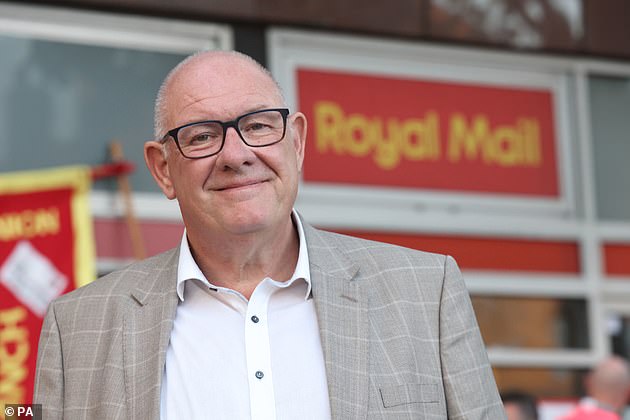 ‘Hopefully the increased pay offer form 3 per cent to 5 per cent is a sign that they’re moving in the right direction as a consequence of these strikes.

‘It’s still nowhere near enough – but it’s a step forward. And with the terrible news on Friday about energy prices, it’s more important than ever that we get that fair pay deal that our members deserve.’

Postal workers took industrial action on Friday, which the CWU declared ‘the biggest strike in the UK since 2009’.

CWU general secretary Dave Ward said at the time his members voted in favour of the strike by 97.6 per cent in a ballot, after management ‘imposed’ a 2 per cent pay rise on employees but ‘rewarded themselves with record bonuses’.

He said: ‘There can be no doubt that postal workers are completely united in their determination to secure the dignified, proper pay rise they deserve.

‘We can’t keep on living in a country where bosses rake in billions in profit while their employees are forced to use food banks.

‘Postal workers won’t meekly accept their living standards being hammered by greedy business leaders who are completely out of touch with modern Britain.

‘They are sick of corporate failure getting rewarded again and again.’ 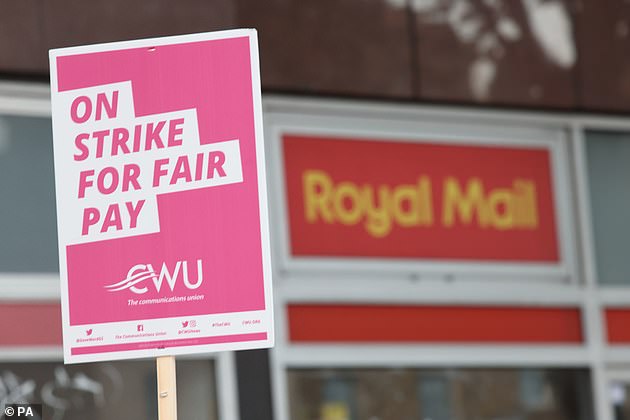 Walkouts are also set to take place on September 8 and September 9 after 97.6 per cent of members of the CWU voted in favour of industrial action 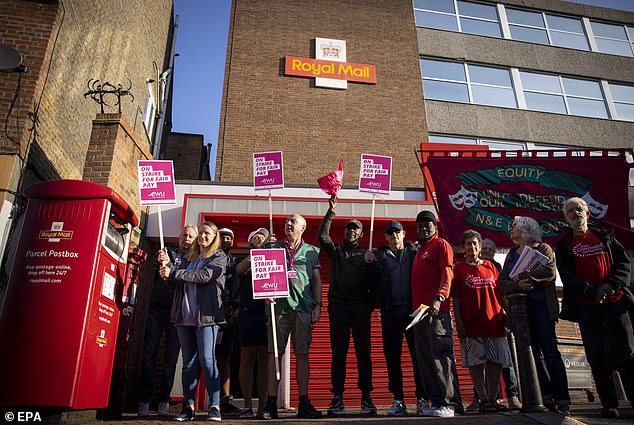 Strikers (pictured outside a post office in London) say that a 2 per cent pay rise is insufficient when inflation is at 10.1 per cent

CWU deputy general secretary Terry Pullinger said: ‘Our members worked miracles during the pandemic and know full well what they are worth.

‘They are fighting for a no-strings, real-terms pay rise – something they are fully entitled to.

‘Those managing Royal Mail Group are treating our members with contempt by imposing such a minimal amount.

‘Royal Mail Group have failed to recognise the strength of feeling and have clearly lost the dressing room on pay, so they have left us with no choice but to fight.

‘Our members deserve a pay rise that rewards their fantastic achievements in keeping the country connected during the pandemic, but also helps them keep up during this current economic crisis.

‘We won’t be backing down until we get just that.’

‘We are losing £1 million a day and the CWU’s strike action is making our situation worse. We want to protect well-paid, permanent jobs long term and retain our place as the industry leader on pay, terms and conditions.

‘Each strike day makes that more difficult, making Royal Mail’s future more uncertain than at any time in its long history.

‘The CWU has failed to respond to our latest invitation to meet to discuss change and pay, instead creating red herrings on the Universal Service, renationalisation and shareholder activity. The CWU is deflecting to avoid talking about the changes we need to make as a business.

‘On the CWU’s first strike day, more than 850 offices were operational as we worked to minimise customer disruption and keep people, businesses and the country connected.

‘Over the Bank Holiday weekend, teams across Royal Mail have worked tirelessly to implement our recovery plans, ensuring NHS letters and critical government mailings were prioritised as we cleared the mail to return to normal service levels.

‘We need the same commitment from the CWU’s leadership to engage on change, this is the only way we can unlock more pay.

‘Our future is as a parcels business. We must adapt old ways of working designed for letters to a world increasingly dominated by parcels and act fast.

‘We cannot cling to outdated working practices, ignoring technological advancements and pretending that Covid has not significantly changed what the public wants from Royal Mail.

‘We apologise to our customers for the inconvenience the CWU’s strike action will cause.

‘We remain ready to talk with the CWU to try and avert damaging industrial action and prevent significant inconvenience for customers. But any talks must be about both change and pay.’

Mexican president says illegal immigration to U.S. 'is not up to us'

Social distancing could be SCRAPPED by June, lockdown roadmap reveals