Vladimir Putin will formally annex occupied regions of Ukraine to Russian in a major speech in Moscow tomorrow, the Kremlin has confirmed.

It comes after Moscow-backed proxy governments in Luhansk, Donetsk, Zaporizhzhia and Kherson held referedums on whether to go ahead with the move.

Armed Russian soldiers taking ballot boxes door-to-door left the results in no doubt, and Ukraine along with its Western allies have vowed not to recognise the results.

But it still marks a turning point in the war because it will allow Putin to spin the lie to his own people that any attack on those regions is an attack on Russia itself.

That expands the suite of military options he can respond with, potentially including nukes – a threat that Putin and his allies have talked up in recent days. 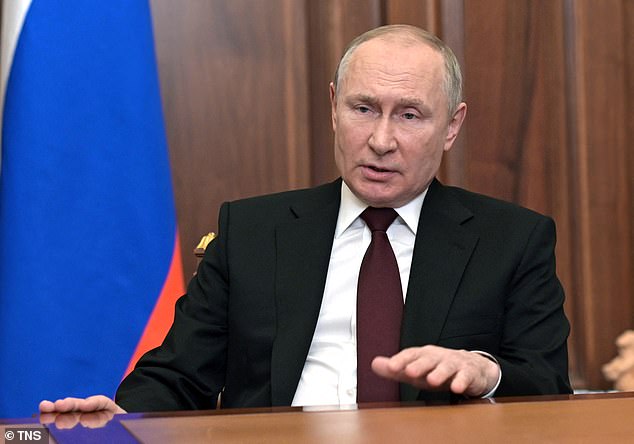 Vladimir Putin will give a speech tomorrow announcing the annexation of occupied regions of Ukraine into Russia, the Kremlin has confirmed 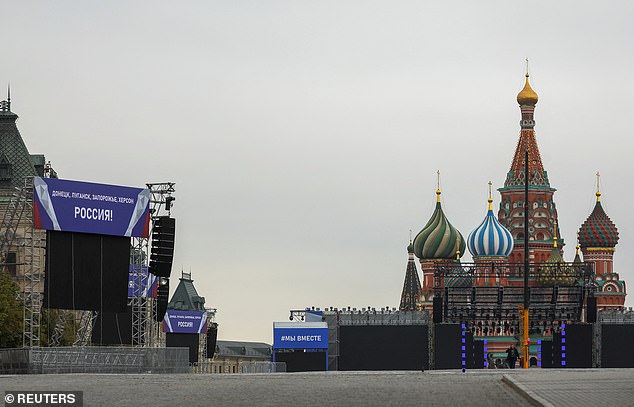 Dmitry Peskov, Putin’s spokesman, said today: ‘Tomorrow in the Georgian Hall of the Grand Kremlin Palace a signing ceremony will take place on the incorporation of the new territories into Russia.’

Putin will make a speech during the event, he added, which will also feature Russian-backed puppet leaders from the occupied regions signing them over to Moscow.

Peskov spoke out as huge TV screens were wheeled into Red Square in anticipation of the address, suggesting a major rally will also be taking place.

Around the screens were digital banners saying: ‘Donetsk, Luhansk, Zaporizhzhia, Kherson – Russia!’, in case there was in any doubt about Putin’s intention.

The United States and its Western allies have sharply condemned the votes as ‘sham’ and vowed never to recognize their results.

‘Under threats and sometimes even (at) gunpoint people are being taken out of their homes or workplaces to vote in glass ballot boxes,’ she said in Berlin.

Ukraine too has dismissed the referendums as illegitimate, saying it has every right to retake the territories, a position that has won support from Washington.

The referenda and Putin’s speech come as he tries to regain the initiative in Ukraine, after his military suffered a humiliating rout two weeks ago.

Ukrainian troops re-took thousands of square miles of territory east of Kharkiv in a rapid advance that caused the Russian frontline to collapse.

That advance continues, with the city of Lyman now all-but surrounded according to both Ukrainian and Russian sources.

The advance is significant, because it is taking place in the Donbas region – even as Putin says capturing it is the main goal of his war.

Facing defeat, the despot has instead doubled down: Caving in to hardliners calling for an escalation by mobilising hundreds of thousands of men into the army.

He has also threatened to use nuclear weapons, both against Ukraine and its Western backers, which ally Dmitry Medvedev has reiterated several times since.

Russia is also suspected to be behind two explosions on the Nord Stream pipes in the Baltic Sea which have crippled a key gas route into Europe.

The purpose of the attack, analysts and experts say, is a warning to the West that its own infrastructure could be targeted unless it backs down.