No escape from Putin’s conscript catchers: Russian is chased through the streets as he tries to avoid call-up to Ukraine… but is grabbed by officers who will now send him to the front line

This is the moment a man desperate to avoid being drafted into Russia’s bloody war in Ukraine was snared by Putin’s conscript-catchers.

Video taken from an apartment block in St Petersburg shows the man literally fleeing the draft after conscription officers showed up at his home.

Running through traffic, the man manages to evade two officers before another two catch up and collar him.

He is now set to be sent to a training camp and could find himself fighting and dying on the frontlines of Ukraine in just a few weeks. 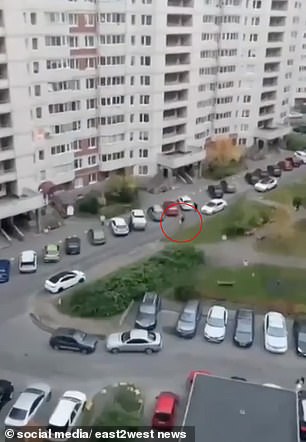 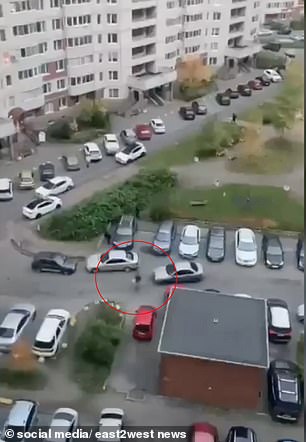 This is the moment a man tried to flee the draft in the city of St Petersburg, running through traffic as police officers chase him

Putin ordered a partial mobilisation of what he said would be Russia’s military reserves last month, with 300,000 men due to be sent to the battlefield.

Since then, footage has emerged of large numbers of men – mostly from Russia’s rural hinterlands – being herded on to buses and taken to training camps.

Though their families were told they would spend months building up skills before going to fight, death notices have begun coming home after just a few weeks.

Putin announced that some 220,000 men have been called up so far and that the draft order would end in a couple of weeks.

But rumours have none-the-less been swirling that Putin’s order actually goes far beyond the 300,000 he announced – with as many as 1million men on the list.

Whispers have been stoked by the fact that a key part of the draft order issued by Putin was omitted, with sources saying it contains the number to be called up.

That has sparked a rush for the exits, with almost 400,000 though to have fled across the border into Finland, Kazakhstan, Armenia and Mongolia.

Putin is desperately trying to stop his military from losing any more ground to the Ukrainian army, which has made big gains on two fronts – both north and south – in the last several weeks.

Experts and analysts believe the new recruits will be used to cling on to what territory he has managed to gain in eight months of fighting, while missile attacks on Ukraine’s infrastructure and cities erodes the will to fight.

The aim appears to be to pressure Kyiv and its allies into accepting a peace deal that favours Moscow – amid fears that would allow Putin the time to rearm his military before invading again.

Russia is known to have suffered heavy losses on the battlefield in Ukraine, though its exact casualty figures are shrouded in mystery.

Ukraine claims to have killed 65,000 Russian soldiers and to have taken out more than 2,500 tanks, 5,000 armoured vehicles, and hundreds of planes and helicopters.

The Pentagon estimated back in August that 80,000 Russians had been killed or wounded, or around half the force that Putin originally invaded with.

Russia’s defence ministry improbably claims that just 5,937 of its soldiers have died which stands at odds with the admission that 300,000 more troops are needed. 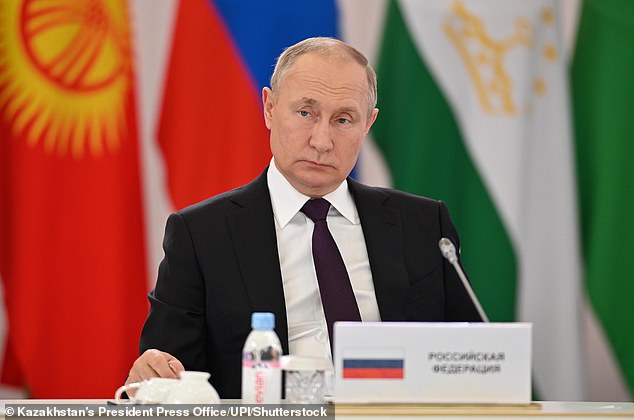 Tropical storm Barry: What category is Barry on the hurricane scale?