London: Russia’s Defence Ministry said on Monday that it had prepared its forces to work in conditions of radioactive contamination, after Moscow accused Ukraine of planning to detonate a “dirty bomb” – something Kyiv has strongly denied.

After weeks of rising international tension following threats by President Vladimir Putin to defend Russia’s “territorial integrity” with nuclear weapons, it was the first concrete statement from Moscow of a change in its forces’ state of preparedness. 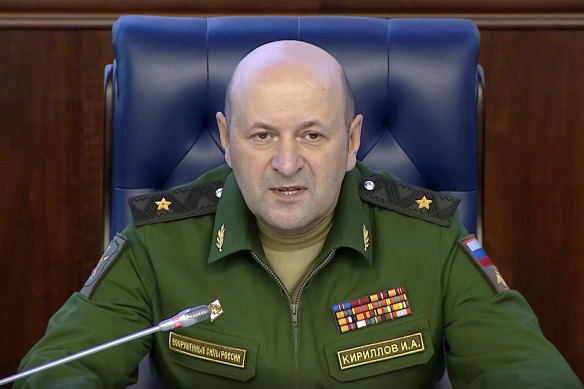 The head of Russia’s nuclear, biological and chemical protection troops, Lieutenant General Igor Kirillov, told a media briefing on Monday the aim of such an attack would be to blame the resulting radioactive contamination on Russia by accusing it of detonating a low-grade nuclear weapon.

Ukraine wanted to paint Russia as a “nuclear terrorist”, he said. “The aim of the provocation would be to accuse Russia of using a weapon of mass destruction in the Ukrainian military theatre and by that means to launch a powerful anti-Russian campaign in the world, aimed at undermining trust in Moscow.”

Kirillov concluded: “Work has been organised by the ministry of defence to counter possible provocations from the Ukrainian side: forces and resources have been put in readiness to perform tasks in conditions of radioactive contamination.”

Ukraine’s Western allies have dismissed any suggestion that Kyiv is building or planning to use a dirty bomb, and Ukrainian President Volodymyr Zelensky said the accusation was a sign that Moscow was planning such an attack itself and would blame Kyiv.

Russian Foreign Minister Sergei Lavrov was dismissive of their responses.

“The unfounded denials of our Western colleagues, saying all this is fiction and that Russia itself plans to do something similar in order to later blame the Zelensky regime – this is not a serious conversation,” he told reporters after a meeting of the Valdai International Discussion Club.

The Russian defence ministry said military Chief of General Staff Valery Gerasimov had spoken to his US and British counterparts by phone on Monday to discuss the possibility that Ukraine could use a “dirty bomb”.

The US State Department spokesperson Ned Price said on Monday there would be consequences for Russia whether it uses a so-called “dirty bomb” or a conventional nuclear weapon.

Asked if Washington would treat the use of a “dirty bomb” the same as any other nuclear bomb, Price said “there would be consequences” for Russia either way.

“Whether it uses a ‘dirty bomb’ or a nuclear bomb. We’ve been very clear about that,” Price told reporters.