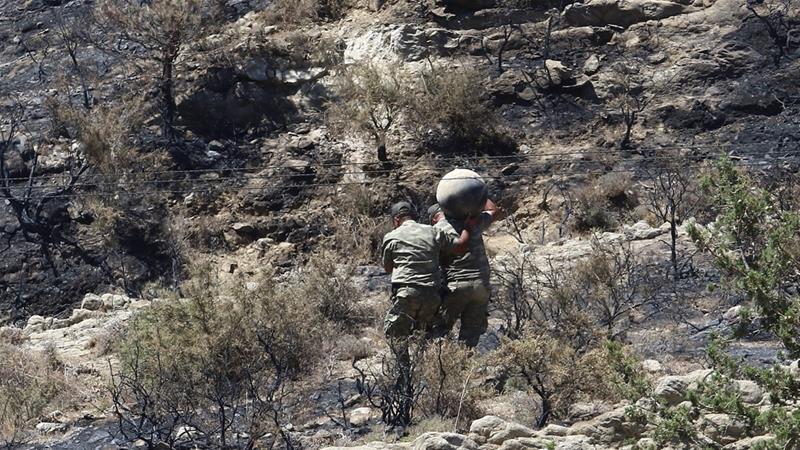 The explosion occurred at around 1am on Monday (22:00 GMT on Sunday), in the Tashkent region, also known as Vouno, about 19km north of Nicosia.

According to Turkish Cypriot broadcaster BRT, Prime Minister Ersin Tatar said no one was hurt in the explosion and that firefighting crews had contained a blaze that the burning debris had ignited.

Turkish Cypriot Foreign Minister Kudret Ozersay said it was believed that the missile may have been fired as part of a Syrian anti-aircraft system.

“The first assessment is that a Russian-made missile, which was part of the air defence system that took place last night in the face of an air attack against Syria, completed its range and fell into our country after it missed,” Turkish Cypriot Foreign Minister Ozersay said in a Facebook post on Monday.

Cyprus is located around 193km west of Syria, where Israeli warplanes struck Syrian military positions on Monday morning, killing at least four civilians and wounding 21 others, according to state media.

Mustafa Akinci, the Turkish Cypriot leader, earlier linked the incident to military operations in the Middle East but further investigations were under way by the military to establish what it was.

A light in the sky

“It is evident it is not something stemming from our soil … It is one of the bad sides of the war in the region falling into our country,” he said.

Police cordoned off the field where the object landed and nearby villages where debris has been found.

Tatar said Turkish military authorities may assist in the investigation.

“An assessment from the pictures made public shows the base of its wings. It has Russian writing on it, so it suggests it is Russian made. Syria uses Russian-made missiles, so a not-so-safe assessment would be it was … an S-200 [missile],” Pentaras, a retired army general, told Sigma TV in Cyprus.

Jamming technology could have diverted the missile, he said.

Residents told Cypriot media they saw a light in the sky then three loud explosions were heard for miles around.

Cyprus was split in 1974 when Turkey invaded following a coup by supporters of union with Greece. The country’s internationally recognised government is seated in the Greek Cypriot south.

Only Turkey recognizes a Turkish Cypriot declaration of independence and keeps more than 35,000 troops in the north.

Cypriot Defence Minister Savvas Angelides said government authorities are investigating the blast but refrained from speculating on its cause.

Man discovers unopened 1988 Nintendo video game that could sell for $10,000

Royal heartbreak: How Charles will have to make huge decision if Philip outlives Queen
Asia