The price of a pint of milk has surpassed £1 for the first time ever at Sainsbury’s, as the cost-of-living crisis continues to deepen.

The supermarket chain has started selling a single pint for £1.05 in some of its smaller stores, while a two-pint now costs £1.35.

This means shoppers are now paying two-and-a-half times more for milk than a year ago, when the price of an average pint was 43p, according to official figures.

It comes as the Consumer Price Index (CPI) surged to 10.1% this week, up from 9.4% in June and at its highest level since February 1982, driven largely by fuel and food prices.

Milk and other dairy products have been hit particularly hard, with butter increasing by 27.1 per cent and cheese by 17 per cent in the past 12 months, according to data from the Office of National Statistics (ONS).

Meanwhile, the price of a pint of milk in Sainsbury’s bigger supermarkets costs 85p, a fifth less than in their local stores, while two pints will cost you £1.15. 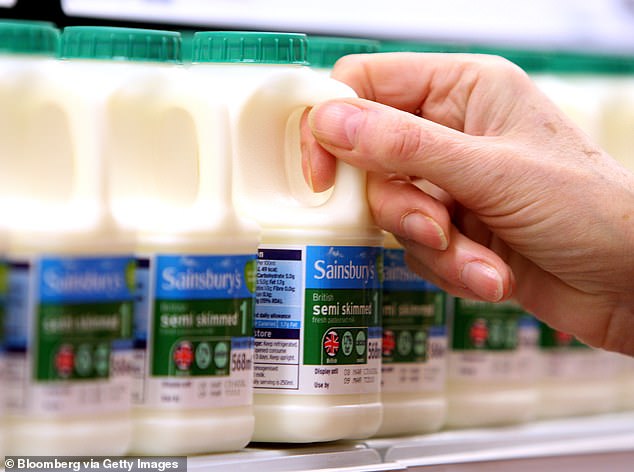 The price of a pint of milk at Sainsbury’s has surpassed £1 for the first time ever, with some local stores now charging £1.05

Sainsbury’s explained that the price difference is because convenience stores are more expensive to run.

A spokesperson said: ‘Rents, for example, are often more expensive in our smaller stores due to their locations.

‘It can also be more of a challenge to deliver products to our local stores.’

All UK supermarkets increased the price of milk last money after farmers said the cost of producing one litre had increased from 23p to 44p in the space of a year, according to the Sun. 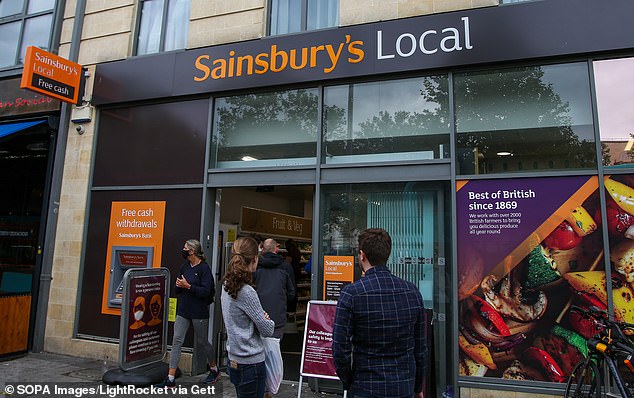 How much the average cost of living has risen

Rising prices are impacting every sector within the UK, with items now costing far more than they did in comparison to 2017. According to Penfold Pension, here’s how much certain purchases would have set you back five years ago to now and into 2025 on average.

Meal in a restaurant

And it looks like the price might increase even further, with the average cost of a pint of milk, currently 55p, expected to be 64p by 2025.

Pension provider Penfold has also predicted that the prices of other food products will soar in the next three years, with the average pint of lager, currently £3.95, set to go up to £4.42 by 2025 and as much as £13.98 in London.

According to the report, other areas will also be hit with huge increases including transport, accommodation costs and daily essentials.

The report states that the cost of a pack of 20 cigarettes has increased by nearly £3 in the last five years, with the average price of a pack expected to hit £15 by 2025.

Concert tickets have increased in price by a huge 98 per cent compared to five years ago.

Transport costs have also increased, with more than a quarter of salaries being spent on public transport per year.

The figure is set to rise nearly 10 per cent in the next three years.

Brits also face the highest prices in Europe for public transport at over 55p per mile. The average in Europe is 14p per mile.

Even the cost of paying for streaming services, such as Netflix, Amazon Prime and Disney Plus will not be exempt from inflation.

Higher costs across the hospitality sector will also push up prices for takeaways, bars, clubs and hotels over the next 12 months.

They also mean a standard meal at Nando’s of butterfly chicken, sides and drinks for a family of four would go from around £68 to £72.08.

It comes after fast food chain McDonald’s raised the price of its trademark cheeseburger to meet inflation.

The fast food giant increased its price for the first time in 14 years last month – from 99p to £1.19 – and also announced that breakfasts, extra value meals, chicken nuggets and coffee would become more expensive.

Restaurants and pubs are facing higher energy bills, a shortage of ingredients and supply issues as supplies become more expensive.

There are also ongoing problems in attracting and keeping staff – leading to higher wages to keep the business running.

‘Price rises in other staple items, such as pet food, toilet rolls, toothbrushes and deodorants also pushed up inflation in July.

‘Driven by higher demand, the price for package holidays rose, after falling at the same time last year while air fares also increased.

‘The cost of both raw materials and goods leaving factories continued to rise, driven by the price of metals and food respectively.’

Susannah Streeter, analyst at Hargreaves Lansdown, told the Evening Standard: ‘The relentless rise upwards in prices continues, with little sign of a break for consumers who are desperately trying to make ends meet.’