More than 20 raids target the al-Dulaimi airbase in Sanaa after the US demands warring parties enter into peace talks. 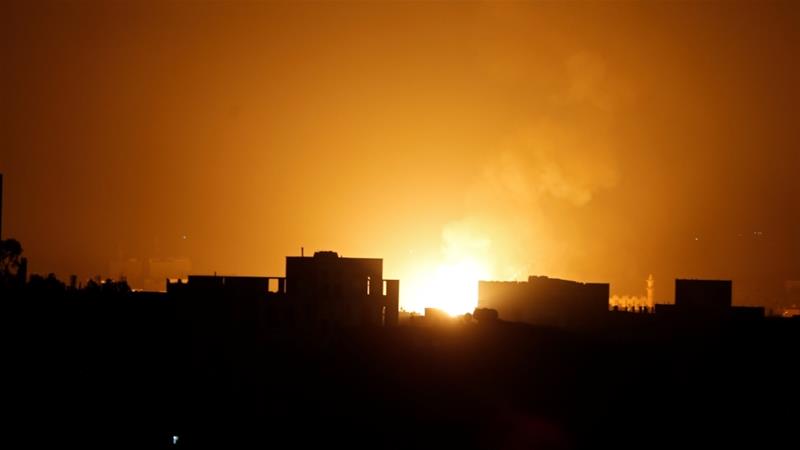 The Saudi-UAE military alliance at war with Yemen’s Houthis says it bombed Sanaa International Airport and an adjoining airbase which were allegedly being used to launch drone and ballistic missile attacks.

Colonel Turki al-Malki, the alliance’s spokesman, said on Friday that aviation at the airport and international aid efforts were not affected.

He told the kingdom’s al-Ekhbaria TV that a press conference would be held later in the day to provide evidence that the airport was being used by the Houthis to launch attacks.

The Houthi-affiliated Al-Masirah news outlet did not address the alliance’s claims, instead reporting that more than 30 raids targeted the al-Dulaimi airbase in Sanaa and its surrounding areas.

Sources in the capital, however, told Al Jazeera that the number of attacks was closer to 20.

The Yemeni government said on Thursday that it welcomed “all efforts to restore peace” after the US and UN called on the warring parties to enter into negotiations planned for Sweden later this month.

US Secretary of Defense James Mattis and Secretary of State Mike Pompeo demanded an end to the war, including air strikes, in an implicit acknowledgement that the alliance was involved in the bombing of civilians.

Nasser Arrabyee, a Yemeni journalist based in Sanaa, said the US’s 30-day deadline for the resumption of the talks was being interpreted by the Saudis and Emiratis to intensify their bombing campaign and reclaim territory from the rebels.

“If the US wanted to stop the war, it could stop it within a minute,” Arrabyee told Al Jazeera.

“Right now, the Houthis are willing to enter into negotiations because any negotiated solution is a victory for them.

On Tuesday, the Saudi-UAE alliance sent more than 10,000 troops to the port city of Hodeidah in a new offensive aimed at securing so-called “liberated areas”.

Hodeidah port is the main gateway for commercial imports and relief supplies into the country, and also carries strategic importance for the alliance.

Saudi and Emirati officials have alleged it is the main entry point for Iranian arms shipments to the Houthis, a charge Tehran and the rebels deny.

“The port of Hodeidah is a lifeline for millions of children throughout Yemen, particularly in the northern parts,” Geert Cappelaere, the regional director of UNICEF, told Al Jazeera.

“So any offensive on Hodeidah is putting the lives of children at risk,” he said.

According to the Yemen Data Project, the Saudi-UAE alliance carried out at least 335 air raids on Hodeidah province between June 1 and September 30, with civilians frequently bearing the brunt.

At least 15 people were killed in September when raids hit a highway linking the city of Hodeidah with the capital, Sanaa.

The Saudi-UAE military alliance has acknowledged mistakes in its air operations but has mostly defended its record.

It has denied deliberately targeting civilians but the kingdom’s narrative over its actions in Yemen has faced mounting criticism following the killing of Jamal Khashoggi, a Saudi journalist and Washington Post columnist.

Earlier this week, the Armed Conflict Location and Event Data Project (ACLED), an independent watchdog, said around 56,000 Yemenis had been killed in violence, a death toll five times higher reported by the UN.