Walking through the halls of Northern College of the Arts and Technology, you won’t just see students sitting in front of a whiteboard.

Instead, they are performing on stages, recording music in studios or repairing cars in the garage. 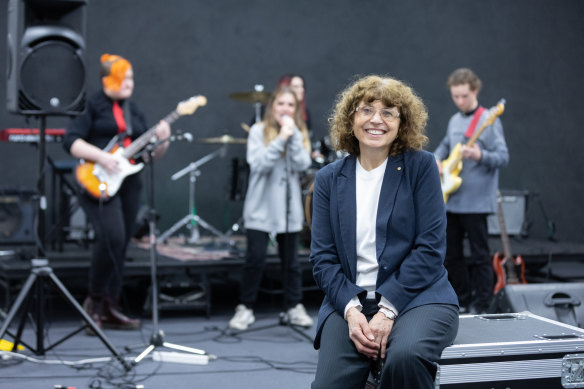 Raffaela Galati-Brown has been the principal at NCAT since 1991. Credit:Jason South

The school, which caters to Year 10 students, VCE, VCAL and post-secondary students, has been on a strong trajectory of growth for 10 years, improving its median VCE study score from a low of 23 in 2012 to a 10-year high of 28 in 2021.

It’s been achieved by supporting students’ passions, said the school’s principal Raffaela Galati-Brown, who has been in the role since 1991, covering its reinvention from the former Northland Secondary College into the artistic and technically focused school it is today.

“Parents say, ‘Oh my god, you know, what have you done with my child?’ It’s so wonderful.”

You can view the full list of winning schools, and explore the data for your secondary school using this year’s Schools that Excel dashboard:

Galati-Brown said that by letting students pursue their interests, they become more engaged with subjects such as maths and science.

“They find their place because they’re here with other people who are passionate about the same things.”

Students can choose from subjects that include engineering, animation and interactive design, electrotechonology, and dance. There’s even a subject for those interested in instrument making.

The Age has named the Northern College of the Arts and Technology its 2022 Schools that Excel winner for government schools in Melbourne’s north.

Year 12 student Tom Sherwood travels an hour each way on public transport to the Preston campus but said, “it’s worth it – it’s a really good school to be at”.

Tom, whose main interests are music and sound production, said the school and its specialist teachers gave him opportunities to develop his skills in these fields.

Year 10 student Carly Brown, meanwhile, is a train buff who is pursuing a career in engineering.

“I went to an all-girls school and I found it really hard to get along with people because they didn’t have the same interests, especially with trades. They all wanted to become something else, and I was like, I don’t know what I want to do, then I came here and I was like, a trade is definitely for me.”

What is Zionism? Meaning explained

Tragedy as woman, 83, killed in ‘arson attack’ after jumping from window