MPs and academics brand the Home Office decision as ‘dangerous’, as her family lawyer considers ‘all legal avenues’. 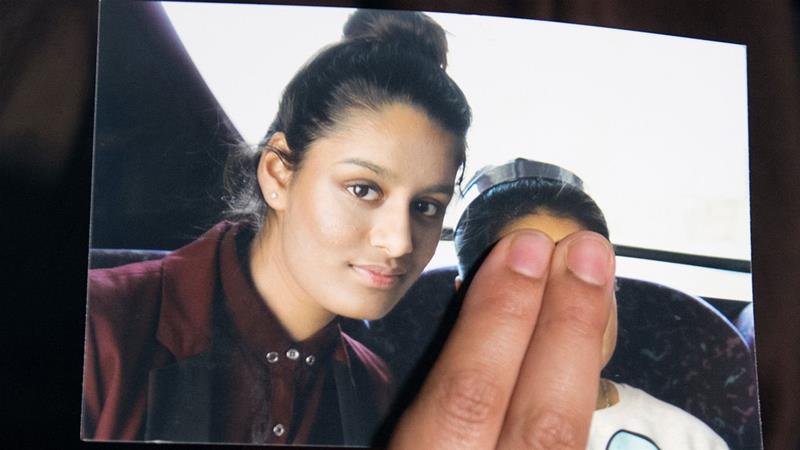 The family of Shamima Begum, one of the three British schoolgirls who left the United Kingdom to live in ISIL’s so-called caliphate, say they plan to challenge the government’s decision to strip her of her citizenship.

Her family’s lawyer, Tasnime Akunjee, said in a statement that they were considering “all legal avenues”, as a senior MP and a leading academic branded the government’s decision as “dangerous”.

“[Her] family are very disappointed with the Home Office’s intention to have an order made depriving Shamima of her citizenship,” Akunjee said.

“We are considering all legal avenues to challenge this decision”.

Citing government sources, the BBC reported that it was possible to strip the 19-year-old of her UK nationality as she was “eligible for citizenship” of another country.

However, according to reports, while Begum is believed to be of Bangladeshi heritage, she does not have the Asian country’s passport and has never visited there.

International law forbids countries from making people stateless by revoking their only citizenship.

According to barrister David Anderson, who previously served as a reviewer of the UK’s anti-terror legislation: “Those born as British citizens who are not dual nationals cannot be stripped of their citizenship in any circumstances.”

Begum had run away from her home in East London when she was 15 to live in Syria after the ISIL captured vast swaths of territory across Syria and Iraq.

After giving birth this week in a Syrian refugee camp, Begum says she wants to return to the UK for the sake of her newborn.

She had previously given birth to two other children, but both died during her time in Syria.

In an interview with ITV News, she insisted that she was “not a threat”, despite not expressing regret for joining the armed group.

“I don’t know how I would be seen as a danger. I’m not going to go back and provoke people to go to ISIS or anything, if anything I’m going to encourage them not to go because it’s not all as it seems in their videos.”

I’m afraid that for various reasons I think today’s decision to strip Miss #Begum of her UK citizenship is a mistake & a dangerous precedent. She was born here, educated here & is our responsibility. We should defend our system & she should be brought back to face the UK courts. pic.twitter.com/1BWYHhQKH7

Shiraz Maher, the director at the International Centre for Study of Radicalisation at King’s College London, also railed against the announcement, adding that authorities should consider different steps in Begum’s case.

“I think it’s a very dangerous decision, it does create this perception that there is a two-tier system and a system that’s frankly racist,” Maher told BBC’s Newsnight.

“And this is the perception that occurring in Muslim communities across the country. It’s a dangerous situation the Home Secretary has created,” Maher added.

Activists were also quick to point out that the UK had yet to revoke Asma al-Assad’s citizenship, referring to the British born wife of Syria President Bashar al-Assad who has been implicated in war crimes by the United Nations.

Britain stripping citzenship of a school girl who got sucked in by online ISIS propaganda is nothing shy of political race baiting.

Nor Brits who joined IRA.

Earlier this week, Akunjee, the Begum family lawyer, said that the 19-year-old was being treated less fairly than Nazi war criminals.

“Our politicians are saying that she should be denied protections and due process that would have been granted to Nazis.

“The Nazis had the Nuremberg trials. They were given due process. This girl was a victim when she went out there at 15 years old.”

On Sunday, the United States called on European nations and other countries to repatriate and prosecute their citizens who travelled to Syria to join the ISIL.

The US-backed Syrian Democratic Forces (SDF) say they have arrested more than 3,200 ISIL fighters in the territory they control in northeastern Syria, with more than 800 believed to be foreign fighters.

In addition to the hundreds of men, the SDF also say they are holding more than 2,200 women and children.

The campaign against the ISIL is currently focussed on Baghuz, a small, remote village in Deir Az Zor province where thousands of civilians are trapped by the armed group.