In the clip shared on Twitter Wednesday by user Black Rebel, a man can be seen grappling with and punching a woman wearing Trump's signature red "MAGA" hat. 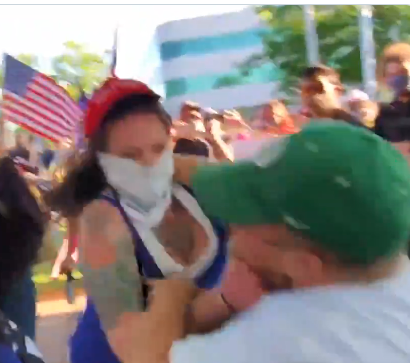 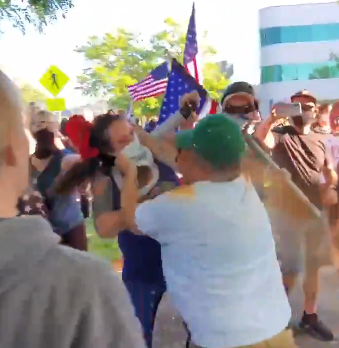 Moments later, the scuffle is broken up when someone else approaches the man from behind the woman and appears to spray pepper spray on the man's face.

The fight continues for a few more seconds as the two throw punches at each other before several bystanders intervene and pull them apart.

"You punched a girl! F**k you!" exclaims a bystander in the background.

The man then walks away before several other surround him as he gets treatment. 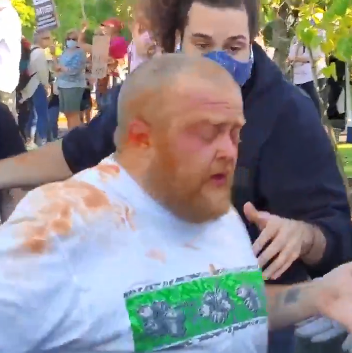 The clash came as Black Lives Matter activists sparred with supporters of Back the Blue, a movement supporting law enforcement, earlier this week outside Gresham City Hall.

Blue Lives Matter supporters were responding to a BLM flag that's currently being flown at the government building, according to Meaww.

The Gresham City Council held an emergency meeting on Wednesday to discuss the protest and the counter-protest that had taken place.

Officials in Oregon also mulled over the possibility of removing the flag before it's scheduled to come down at the end of the month because of safety concerns.

"The Council had a thoughtful and heartfelt discussion centered around keeping our residents and our police officers safe, and how best to accomplish that goal," they said in a statement.

"The Council is united and unwavering in their support for the right of individuals to express their First Amendment rights and peacefully protest.

"As well, Gresham City Council strongly denounces violence, destruction of property and hate speech; individuals perpetrating these acts are not welcome in Gresham."

While it's unclear what sparked the fight between the man and the woman, it wasn't the first time a Trump supporter was attacked for their MAGA hat.

Two women were arrested last Sunday after a viral video allegedly showed them stealing a MAGA hat from a 7-year-old boy and his mom.

A 34-year-old New Hampshire man allegedly slapped a 15-year-old boy wearing a MAGA hat after leaving a polling place during the state primary in February.

Vicious vandalism emphasizes how ‘divisive’ Alberta election is getting