Hunt saboteurs were met with violent retaliation on Saturday after vehicles they were driving were rammed off the road and badly damaged.

The shocking footage shows hunt saboteurs from Manchester , Sheffield, Liverpool , and West Yorkshire as they travel to disrupt a hunt on Gold Hill Farm in Edingley, Newark, by Grove & Rufford Hunt.

As the Manchester hunt saboteur group drive towards the hunt’s meeting place, a dark blue Toyota Land Cruiser with no licence plates leaves the farm and drives along side them.

The Manchester hunt saboteur group who took the footage said: ‘As it pulled up alongside us we could see that the occupants of the vehicle were looking for trouble so we decided to move on.

‘As we attempted to pull away they reversed alongside us whilst trying to force us off the road. 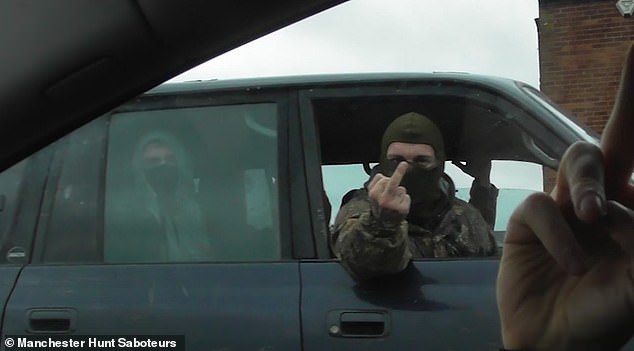 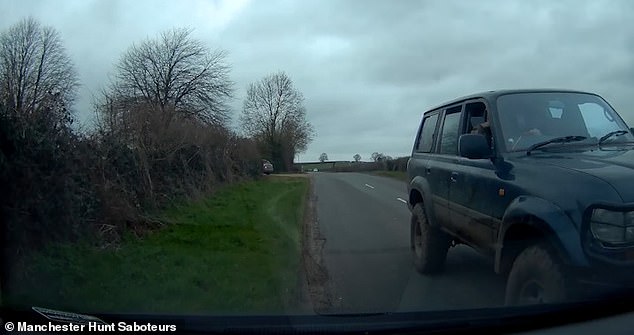 ‘We managed to get away from them and drove further down the road to meet up with the Sheffield Vehicle. The Toyota Land Cruiser followed.

‘A game of cat and mouse ensued where they tried multiple times to block our path. We eventually lost them and returned to meet up with the other groups of sabs.’

The saboteurs reported the Toyota’s behaviour to the police who attended.

After the police had left the Toyota Land Cruiser returned and violently rammed two of the hunt saboteurs’ cars as they filmed on dashcams. 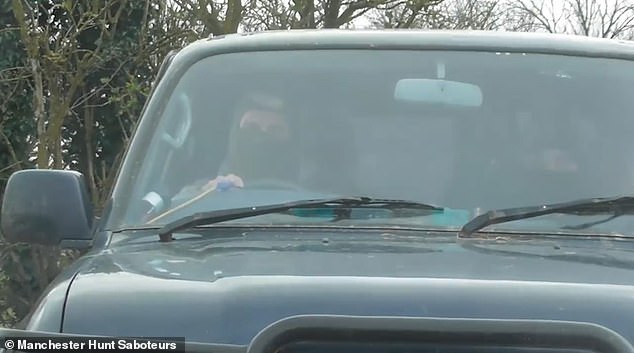 The clip shows saboteurs  parked up at the side of the road, with their black Subaru Forester in front of the vehicle they are filming from.

The Toyota land cruiser, with occupants wearing balaclavas and camouflage clothing, is parked perpendicular to the vehicles on a dirt track.

After a car passes, the Toyota drives directly into the side of the Subaru.

A man says: ‘Are you filming that?’ 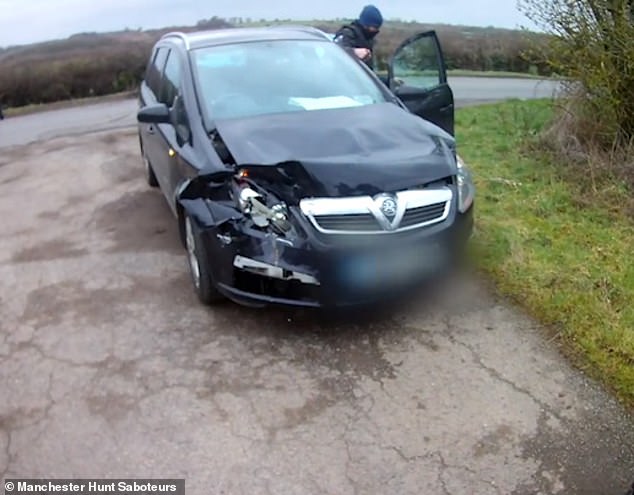 A voice on a radio can be heard saying: ‘Get the coppers here right now. We’ve just been rammed. Right now, right now.’

The Toyota then reverses and turns to the saboteurs in the vehicle filming, driving into them head on, causing a collision.

They then reverse and drive off, giving the middle finger, as one of the saboteurs responds with his own two-fingered gesture.

The video posted to the Manchester Hunt Saboteurs’ Facebook page has racked up more than 90,000 views.

Facebook users were shocked by the tactics of the hunt supporters, some calling for more action from the police.

Yvette N Carlos Dean wrote: ‘Are the police going to stand by until a murder is committed?’

Darren Evans commented: ‘If the Sabs would have rammed the scum’s car I bet the police would have been there in droves.’

Michael Walker said: ‘All this because they want to kill wildlife. Sick people indeed.’ 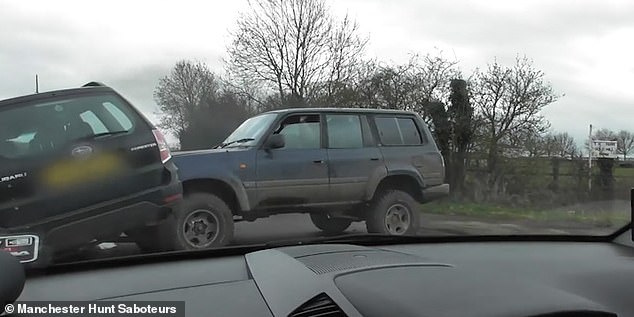 James Clark added: ‘Yet another blatantly corrupt police force ignoring dangerous driving from the hunt fraternity. This country is sick to the core.’

However, there were a minority of users who supported the actions of the hunt supporters.

Janice Kerr remarked: ‘About time you got what you deserve. Might have helped them with my vehicle if I’d been there.’

The saboteurs said they had planned to position themselves in areas where the hunt were likely to go for the day, but had to abandon these plans after their vehicles were damaged.

Grove and Rufford Hunt have been contacted for comment.

Here’s How Climate Change and Covid Are Transforming Skiing

How close is too close? If you aren’t sure, ask first