Shocking moment two hitmen threw a GRENADE into man’s home after being paid £8k by his ex-business partner who blamed him for loss of £400,000 in failed venture

This is the shocking moment a couple of hired hitmen lob a grenade through a businessman’s bathroom window in an aggressive revenge attack.

Dramatic CCTV shows Stephen Cronin, 31, and Bradley Harrington, 30, sneak up to the Birmingham house, smash the window with an axe and toss the bomb inside.

As the pair sprint towards a getaway car, a flash of light bursts from the room and the blast rips off the window frame, sending it clattering on to the driveway.

But the two thugs and their bitter paymaster Danyal Gurjee, who blamed the targeted businessman for costing him £400,000, were jailed on Friday for their attack in the early hours of March 26. 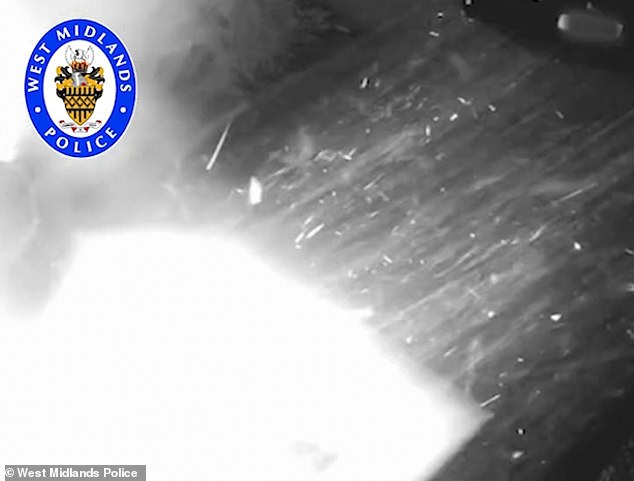 As the pair sprint towards a getaway car, a flash of light bursts from the room and the blast rips off the window frame, sending it clattering on to the driveway

Gurjee, 40, had accused the 43-year-old victim of rinsing him in a failed business venture and demanded his money back in a series of threatening texts and phone calls.

He had ploughed cash into a property business venture in the Democratic Republic of Congo alongside his would-be partner, who also invested heavily.

After the deal collapsed towards the end of 2017, Gurjee, who lost his full stake in the proposed project, paid the hitmen £8,000 to exact revenge.

The footage shows Cronin and Harrington, both wearing balaclavas, wrench their way into the gated property and head towards a downstairs toilet window.

Cronin then shatters the glass with an axe before Harrington throws in the improvised grenade. 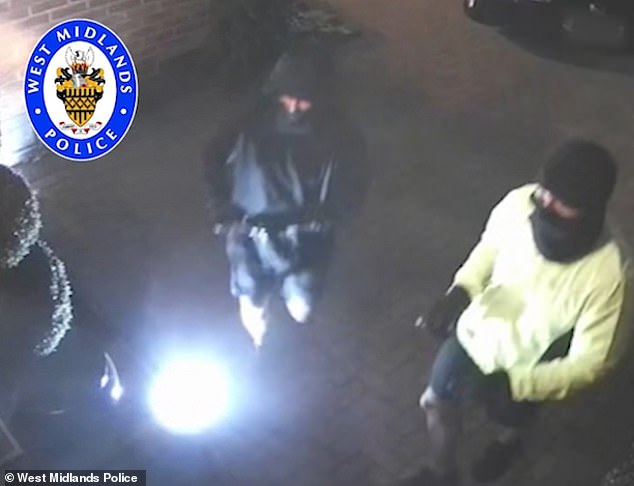 Cronin and Harrington, both wearing balaclavas, wrench their way into the gated property and head towards a downstairs toilet window 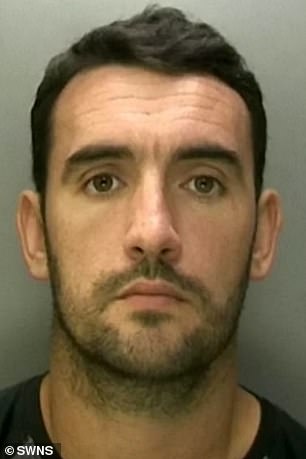 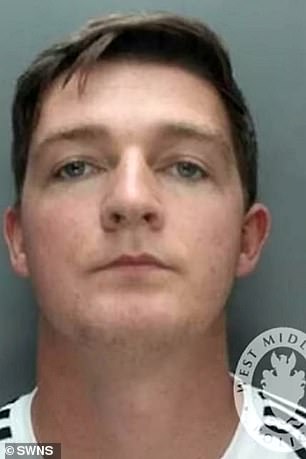 Stephen Cronin (left), 31, and Bradley Harrington (right), 30, were paid £8,000 to target a Birmingham businessman. Both men have been jailed

It caused tens of thousands of pounds worth of damage but luckily the property was empty and nobody was injured.

Detectives set about a painstaking CCTV trawl which traced the hatchback’s movements for up to three miles as it headed south of the city.

Officers suspected they were heading towards the M42 and Automatic Number Plate Recognition (ANPR) cameras later picked them heading onto the motorway.

The car registration was shown to be active across Merseyside and was seen on camera heading south towards the West Midlands on the night of May 23.

Just over a month later, on 26 June, a relative of the victim received a phone call from a man with a Merseyside accent.

The caller asked for a message to be passed on that they could ‘come to some sort of arrangement’ but warning they were ‘not to be messed with’.

And the next morning the victim’s mother awoke to find a greetings card with a handwritten note urging her son to contact a mobile phone number. 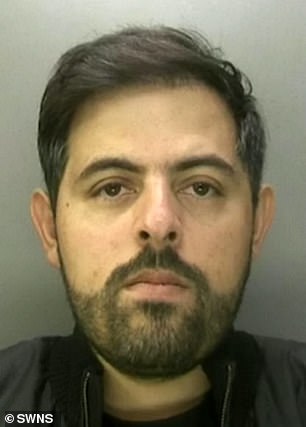 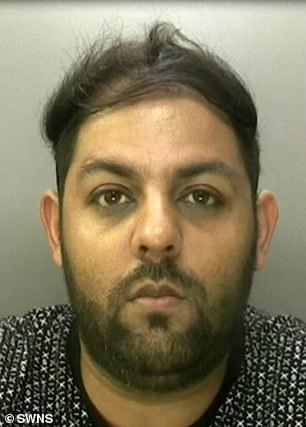 Danyal Gurjee (left) and his brother Abdul Gurjee (right) have both been jailed. Danyal hired the hitmen for a revenge attack on a businessman he blamed for costing him £400,000

Officers found the card featuring a sausage on the front and the words ‘You Silly Sausage’ was stocked at a local supermarket and CCTV revealed two men buying the it at a self-service till.

Harrington and Cronin’s fingerprints were found on the card and more CCTV analysis revealed they travelled from Liverpool to Birmingham and back on June 26 and 27.

The pair of hired thugs were arrested days later and charged with conspiracy to cause an explosion.

A mobile phone seized from Cronin showed regular contact with numbers associated with Danyal Gurjee and his brother Abdul Gurjee.

In one message Cronin, tells Abdul ‘he gave me 3k for a 10k job. I’m not letting this go the same be happen to his house that’s a promise’.

It prompted Danyal to retort: ‘You ain’t getting more dough. You’ve had 8k. Done further more you could have had a lot more. Don’t threaten me I don’t take lightly to that’.

The three men were jailed for a total of almost 70 years at Birmingham Crown Court on Friday.

Gurjee, of Preston, Lancs., was jailed for 16 years and Harrington, of West Derby, Liverpool, was caged for 23 years after being found guilty of conspiracy to cause an explosion.

Cronin, of Dovecote, Liverpool, admitted conspiracy to cause an explosion, possession of two hand grenades, a sawn-off shotgun and a.22 rifle. 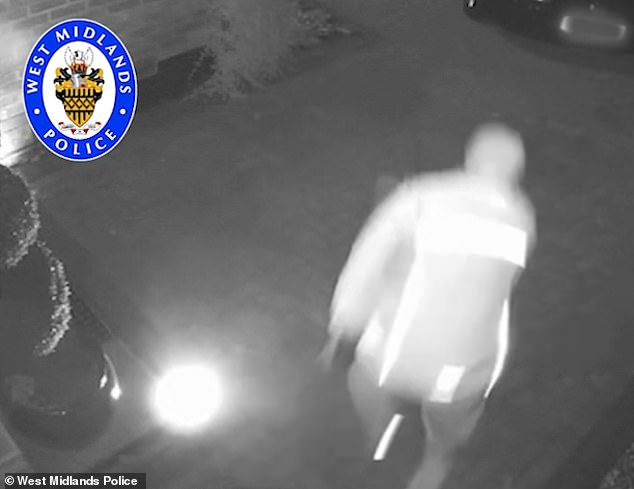 The pair sprint from the blast zone before fleeing in a getaway car. They caused tens of thousands of pounds worth of damage

The additional weapons were found when cops stopped a van with cloned plates and he was was sentenced to 21 years and eight months behind bars.

Gurjee and his brother Abdul Gurjee, 36, also of Preston, who was jailed for eight years, were also convicted of blackmail.

Detective Inspector Tom Hadley, of West Midlands Police, said: ‘The investigation was detailed and complex carried out with exceptional skill and tenacity by our officers.

‘It’s a fact not lost on the prosecution barrister who, at court, praised the determination of the investigation team.

‘The team went to great lengths to identify the offenders by painstakingly examining CCTV from around Birmingham, tracking their car to Merseyside and uncovering vital CCTV evidence from service stations and shops.

‘It’s not clear how the Gurjees came across Cronin and Harrington but it’s suspected they were customers at a mobile phone shop where Abdul worked and he simply thought they were sinister types who could help his brother exert more pressure on the victim.

‘These are very dangerous hitmen who were prepared to use extreme levels of violence in order to threaten and intimidate.

‘In my view they would happily have seriously injured someone of killed had the price been right and the public are much safer with them behind bars.’