Imagine a world where women were commodities, where teenage girls had their virginity auctioned off to the highest bidder.

Imagine a place where a pretty beggar could start her life on the street and end it on a country estate, married to a wealthy, titled man.

Imagine sex without contraception, where syphilis was rife and incurable, where you could scale the heights as a celebrated courtesan or die broken, diseased and starving.

Welcome to 18th Century London and the world of Harlots, a BBC2 drama series starting next week, which lifts the lid on the sex trade of the Georgian era.

Perhaps it’s our love of Jane Austen’s romantic novels or Gainsborough’s portraits of bewigged gentlemen and ladies in lustrous satin that have given us the impression that all Georgians were bound by refined manners and repressed desire. Nothing could be further from reality.

The 18th Century was also an age of bawdy, licentious excess. 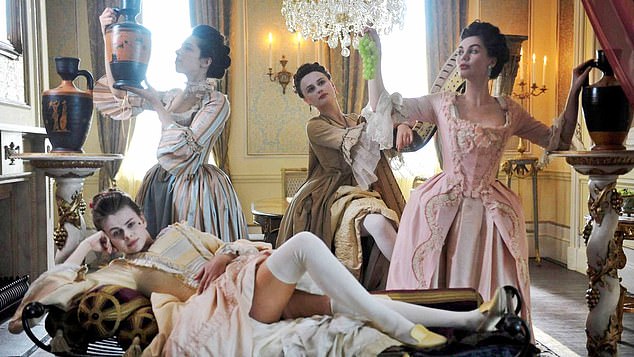 A high-class brothel of 18th Century London, as depicted in Harlots, which airs on BBC2 starting next week

At the time, London was not just the centre of overseas trade and a burgeoning empire, but the heart of the nation’s sex industry.

Behind its elegant porticoed buildings lay brothels filled with underage girls, whipping parlours and bathhouses, where the last thing you’d expect to get for your money was a wash.

It has even been suggested that, during this era, as many as one in five women in the capital may have exchanged sexual favours for money.

Although these things sound remarkable for their sordidness, the world depicted in Harlots is grounded in truth.

At the beginning of Harlots, there is a flurry of excitement as the latest edition of The Harris’s List, a guide to the capital’s sex workers, arrives from the bookseller.

All of the ‘ladies of pleasure’ are eager to hear what has been written about them, anxious that whatever is said will make or break their careers in the sex trade. Scenes like this would have unfolded every Christmas between 1757 and 1795 when the guide rolled off the presses.

The Lists were more than just a dry catalogue of names and addresses, but a wittily written chronicle of London’s sex trade. Each edition contained information about the women who worked in it, providing details of their ages, physical appearance and sexual specialities as well as stories about these women’s lives. 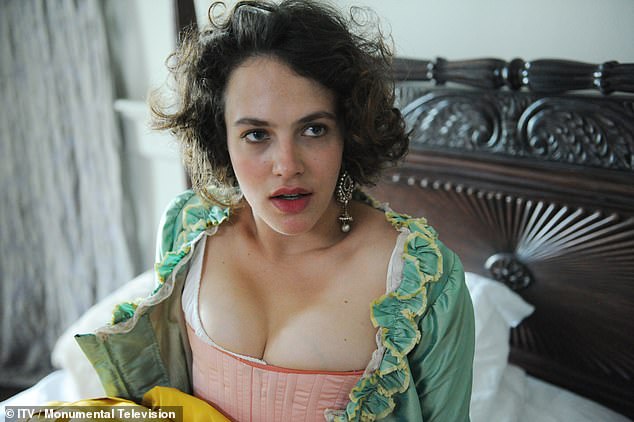 The thousands of women from all walks of life who featured in its pages include the likes of Miss Noble who was known for her ‘skill in the reviving the dead’ with her tongue of ‘double charm’, or Miss West ‘who can pick her gallant’s pocket very coolly’ while in the act. Miss Love of 14 George Street is celebrated for her ‘dark complexion’.

The lists are filled with others who led lives as actresses, servants, shopkeepers, nursemaids and even a number who were married women. They ran the gamut in terms of age and appearance, from those described as ‘true beauties’ to others referred to as ‘veterans in the field of Venus’. Not all were confined to brothels.

The Harris’s List show that women often shared accommodation with other sex workers or lodged with ordinary families, such as green grocers and cabinet makers. Although Covent Garden was the centre of sin, filled with theatres, taverns, coffee houses and bath houses, there was no designated red-light district, and women lived in virtually every neighbourhood, from Fitzrovia to Mayfair, from Holborn to the City.

The Harris’s List cost two shillings and sixpence, which pushed it far out of range of the ordinary working man. Those women who appeared on it catered almost exclusively to middle-class men and above, but the sex trade catered to every strata of society, from the Prince to the dock worker.

Despite of its title, The Harris’s List was not actually written by anyone called Harris, but rather by Samuel Derrick, a debt-ridden Irish poet who slept rough on the capital’s streets and enjoyed the services of its brothels. Derrick had been set to inherit his aunt’s fortune but forfeited his claim to it by moving to Covent Garden and living a life of moral abandon.

In 1756 he had exhausted his meagre earnings and was thrown into debtor’s prison. It was from behind bars that he struck on the idea of writing the Harris’s List. He was inspired by a handwritten list carried in the pocket of one of London’s most infamous characters, Jack Harris, the so-called ‘PimpGeneral of All England’.

Harris ran the Shakespeare’s Head pub in Covent Garden piazza, which once stood where the rear entrance to the Royal Opera House now sits. In the 18th Century, tavern waiters were not only expected to produce drinks and meals for their guests’ enjoyment, but women too.

In the course of his career, Harris was said to have compiled a list of more than 400 women working in London’s sex trade. It was the most extensive ‘pimp’s ledger’ in all of London.

Derrick borrowed this list and created his own, more literary version of it, but in order to protect what little respectability he had left, the poet struck a deal with Jack Harris which allowed him to use his name in the title. The work proved to be an instant success and its proceeds sprung Derrick from debtor’s prison.

But the story of The Harris’s List doesn’t end here – it’s also a tale of unrequited love. The beautiful and charming courtesan Charlotte Hayes was the love of Derrick’s life, and would become his quintessential ‘Covent Garden Lady’.

As the daughter of an unnamed English nobleman and his mistress Elizabeth Ward, herself a madam, Charlotte was born into a life of prostitution in 1725.

Mrs Ward raised her daughter in her brothel and sold her virginity to the highest bidder when she was no more than 14 years old. As an alluring and ‘buxom’ young woman, described has having grey eyes, brown hair and ‘a countenance as open as her heart’, Charlotte had no shortage of wealthy clients. Derrick encountered her in the early 1750s, when her star was in the ascendant.

Dressed in the finest silk and dripping with jewels, Charlotte could be spotted in the boxes at the theatre and rolling about town in her private carriage.

At the time, Charlotte’s name was heralded alongside other famed sex workers, such as Fanny Murray, a woman so desirable that an admirer once asked a cook to stew her shoe for his supper. When Derrick met Charlotte, she was the mistress of his close friend. The couple fell in love and carried on an illicit affair.

Unfortunately, Derrick’s poverty proved to be a major obstacle. Unable to shower her with lavish gifts or to provide for her in any way, the poor poet had no choice but to eventually let her go.

Until the day of his death, he pined for Charlotte. When Derrick died in March 1769, he had managed to burn through every penny of his earnings on wine, women, gambling and extravagant living.

The only object of value he possessed was his yet unpublished edition of the Harris’s List for 1769.

With an estimated circulation of 8,000, the book could generate yearly takings of £2,400, an astronomical sum. It was this that he bequeathed to the woman who had stolen his heart.

Charlotte’s prospects had been on the rise at the time of her lover’s death. But his unexpected bequest arrived when she was experiencing financial difficulties in her attempt to establish herself as one of London’s top brothel-keepers.

In the early 1760s, Charlotte and her new lover and partner in crime, professional gambler and con-artist Dennis O’Kelly, had concocted a plan to create a grand, luxurious set of brothels unlike any seen before in London.

When the couple set up shop in St James’s on the notorious passage known as King’s Place, they were seeking to attract the most illustrious gentlemen in England.

Unlike the spit-and-sawdust establishments of Covent Garden, the ‘nunneries’ of King’s Place were opulent palaces of sin. These genteel neo-classical townhouses boasted of damask lined rooms, gilt furnishings and the type of luxury that would attract a noble clientele.

But what made these brothels so appealing was not necessarily their environment but the elite sex workers who operated there. Charlotte trawled the streets of London in search of suitable recruits.

She looked for especially beautiful faces among the, beggars and nosegay sellers, as well as established sex workers. Once she managed to ‘inveigle such girls into her clutches’ she trained them to become ‘courtesans of the highest order’.

She taught them to walk and speak like ladies, how to dance and behave politely. Finally, she dressed them in ‘a large quantity of French silks and laces’ and ‘brought them into company’. Charlotte commanded the highest prices.

An evening with one of her ‘nuns’ might cost upwards of £100, the equivalent of a shopkeeper’s yearly income. As a result, her patrons were the crème de la crème of Georgian society – earls, viscounts and even members of the Royal Family, such as the future George IV.

As visiting brothels was considered an acceptable pastime for the influential and powerful, Charlotte also counted numerous politicians among her patrons.

Harlots, which originally aired on an obscure ITV digital channel in 2017, perfectly captures the spirit of the Harris’s Lists and the licentiousness of London in which its characters lived.

I had the pleasure of acting as the series’s historical adviser, and while some aspects have been changed to make it a rip-roaringly good drama, a number of the characters have been based on real women, including Charlotte, who is played wonderfully by Jessica Brown Findlay.

Harlots pulls no punches. Its world is harsh and brutal. Women and girls are used, but they are also not without agency.

While some suffer terribly, others thrive in a close-knit community of sex workers, scale the social heights and, if they choose it, move out of the sex trade altogether. It turns out that the true genius of the original Charlotte lay in the ‘special events’ she staged.

In 1778, her name would go down in sexual history for her ‘Tahitian Feast of Venus’, inspired by the journeys of Captain Cook.

According to one source, the festivities began when six couples performed ‘the act of love’ in a variety of positions. Once they had completed ‘their salacious Olympic’, the spectators were invited to join in.

The evening was an unmitigated success, and ‘a handsome purse was subscribed upon the occasion’. It was through such festivities and the meticulous management of her business that Charlotte became one of London’s wealthiest brothel-keepers.

By 1770, Charlotte and Dennis were thought to have earned £40,000 through their combined schemes, a sum that would make them multi-millionaires today.

It was enough of an income to buy them two stately homes: Clay Hill in Epsom and Canons Park in Edgware, as well as numerous properties throughout London.

The proceeds she received from Samuel Derrick’s gift helped to found an entire empire of sex – not to mention a truly eye-opening TV drama.

Harlots starts on BBC2 at 9pm on Wednesday

Tempura From Kyoto at Bouley at Home

Covid 19 coronavirus: Victoria lockdown may be extended as outbreak grows