Deep inside the Royal Women’s Hospital is a sealed-off, air-locked ward for pregnant mothers who are sick with COVID-19.

Mothers deliver their babies alone, without a partner or support person in tow. And when the child is born, they are asked not to kiss the baby. They breastfeed with masks on, breathing out to one side. 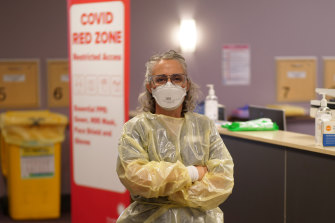 Dr Vicki Woodward, medical lead at the Royal Women’s Hospital’s COVID Ward, says pregnant mothers with the virus who are transferred to intensive care were vaccinated.

“It’s heartbreaking,” said Vicki Woodward, an obstetrician, gynaecologist and the medical lead of the COVID maternity ward. “It’s not how any of us midwives or doctors who care for these women want to care for them.”

Major public hospitals offering maternity services have flipped wards to accommodate the rush of pregnant women sick with coronavirus, while newborns infected with the virus and needing intensive care are isolated in their own air-locked rooms.

They warn of a rise in stillbirths — a trend that has been reflected globally in women who are infected with COVID-19 during pregnancy.

“I think it’s fairly well documented that pregnant women with COVID have an increased risk of stillbirth, and we have noticed that ourselves,” said nurse and midwife Ms Walsh, who noted this outcome was not dependent on how sick the mother was during birth.

In extreme cases, COVID-19 positive mothers have caesareans while unconscious and gasping for air, their lips turning blue. This can occur to mothers who are on ventilators in intensive care, where some of Victoria’s “sickest” pregnant women are treated.

None of the women admitted to intensive care have been fully vaccinated, senior doctors at the Royal Women’s Hospital, Royal Melbourne Hospital and Monash Health confirmed.

At least 66 pregnant Australians with COVID-19 have needed intensive care in the Delta wave of the pandemic, compared with just one in earlier waves. More than 93 per cent of those patients had not received any COVID-19 vaccine, according to available data. 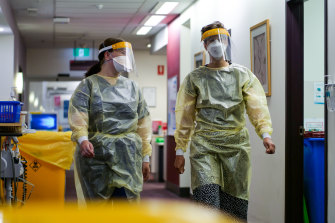 At the Royal Women’s Hospital, signs surrounding the COVID-19 maternity ward’s entrance say “stop”. Only a select team of doctors and nurses, donned in full PPE, are authorised to enter. A “PPE spotter” checks they are properly wearing their protective gear.

Caterers leave meals for pregnant mothers inside the airlock that seals off the 18-bed ward. The packaged food is then collected on the other side by medical staff, who distribute it to the women.

The ward’s doctors and nurses closely monitor the known risks to COVID-infected mothers and their newborns.

The babies are more likely to suffer growth restriction while in utero, so they are scanned twice as often as babies in normal circumstances.

In some cases, but not all, the babies are born with COVID-19 or contract it later on.

Newborns requiring extra care are treated in a specific ward for suspected or known COVID-19 positive babies in the neonatal care intensive unit, which is also air locked.

Monash Health’s general manager of the women’s and newborn program Andrea Rindt said the hospital’s intensive care unit was treating the “sickest pregnant women with COVID in the state”.

Doctors juggle the multiple tasks of helping the mother breathe, sometimes with a ventilator, while tracking the baby’s growth and monitoring when and if removing the child is necessary.

Dr Woodward said it was extremely difficult to care for pregnant mothers when they were on ventilators and unable to communicate.

“When you’re in ICU, and you’re incubated, you can’t tell me whether your baby is moving and whether you’ve got any pregnancy symptoms,” Dr Woodward said.

“We go over every day, and listen to that baby’s heartbeat, but we’re pretty limited in what we can do when you’ve got a tube down your throat.

“If the baby is at term and has been assessed by an obstetrician as being a good time to deliver them and they would be well post-delivery, then as part of the management of the mother we would deliver the baby to help with their respiratory failure,” Dr MacIsaac said.

In these rare cases – where the baby needs to be born while the mothers was extremely unwell – doctors will perform an emergency caesarean, Dr Woodward said.

“These women look terrible. They truly are gasping for breath, like someone having a severe asthma attack – that inability to breathe, the panicking. It’s really distressing for everyone in the room.”

Another major challenge in treating pregnant women sick with COVID in ICU was that they can’t lie in the “prone” position, Dr MacIsaac said. This involves lying a patient on their stomach to help them breathe when they have severe respiratory failure.

COVD-19 maternity wards were flooded with admissions during the surge in coronavirus cases in October, with Monash Health taking up to seven admissions a day.

Over a 13-week period between August and November, Monash Health admitted more than 130 pregnant women with the virus. Of those, 20 per cent were sent to ICU.

Nine women had their babies while they were ICU patients, including five who had emergency caesareans. Not one of the women in the unit was fully vaccinated, Dr Rindt said.

Demand has now dwindled across all hospitals, in line with a statewide fall in COVID-19 hospitalisations following a surge in October. Doctors are preparing for another possible rush of cases in December, in line with published Burnett Institute modelling forecasts, but which are now being revised.

Royal Women’s Hospital’s Ms Walsh said unvaccinated women who did not believe in the severity of coronavirus often changed their minds after being in ICU.

“You can see almost a bit of a change in her mindset — that this is not a cold,” she said. “I’ve never seen someone on six litres of oxygen on a cold before, unless they’ve got a very serious underlying respiratory illness.”

When she was admitted to the Royal Melbourne Hospital’s ICU ward, Kaillee Dyke, was so sick with COVID-19 that doctors nearly performed an emergency caesarean on her while she was on a ventilator, unconscious, and only 26 weeks’ pregnant.

This happened late last year, when vaccines were not yet available. The mother of twins had been rushed to hospital in an ambulance after she was gasping for air, her lungs burning, and she couldn’t sleep or talk. 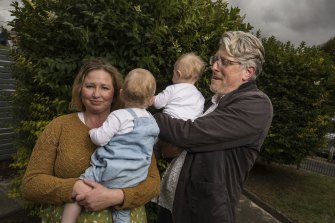 “My partner got a phone call one night to say that I was requiring 100 per cent oxygen, and we’re getting ready to potentially deliver the babies,” Ms Dyke said.

Ms Dyke recovered and was sent home instead, but she returned to hospital a month later, when she was 34 weeks’ pregnant, for an emergency caesarean after one of her twins had stopped growing due to a lack of blood flow to the placenta – a problem she said was probably caused by her having COVID-19.

Both babies, who are now healthy, spent a month in special care at the hospital after they were born. Ms Dyke had ongoing health problems when she finally took them home.

”I was very weak, I still had a lot of aches and pains and breathlessness. It was a very difficult recovery, but once your babies are born I suppose you just rally and do what you can do to make sure that they’re OK.”

The experience should serve as a wake-up call for pregnant mothers who are hesitant about getting the jab, Ms Dyke said.

“If I had been vaccinated it would have been extremely unlikely that I would have become as unwell as I did.”

Rioters ignore pleas for calm as violence flares in Belfast

Two sisters, aged 18 and 12, killed by lightning strike in Norway