In an ideal world, Nikki would have inspected her dream home before purchasing it.

But with a ban on private inspections during lockdown, the 27-year-old knew she’d miss out on the four-bedroom Fitzroy North house if she didn’t buy it sight unseen.

“If you had asked me three years ago, there’s no way I would’ve bought a property without seeing it,” said Nikki, who does not want to disclose her surname or the price she paid for her new home. 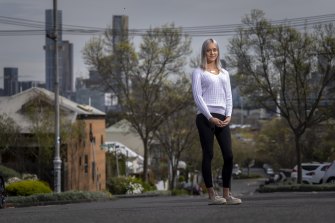 Nikki recently purchased a four bedroom house in Fitzroy North but was unable to inspect it in person due to Melbourne’s lockdown restrictions. Credit:Wayne Taylor

Many buyers are in a similar situation, with real estate agents reporting an increasing number of sight unseen property sales during Melbourne’s sixth lockdown.

It comes as property prices continue to soar, with Melbourne’s median house price climbing by almost $475 a day.

This week he sold a three-bedroom house in Keilor East that faced a railway and factory for $975,000, more than $140,000 above its reserve. The property sold a week after it was listed and just four hours after the contract was emailed to 27 prospective buyers.

“There was no time for lawyers to look over the contract,” Mr Gigliotti said.

Mr Gigliotti said prospective homeowners were weighing up the risks of buying a property sight unseen with the risk of more intense competition when restrictions ease and private inspections resume. “The fear of missing out is the biggest driving force,” he said.

“The aftermath is similar to a shaking of a soft drink can,” he explained.

“The market tends to come back with vigour. They know they will pay more after lockdown so why not pay now with minimal competition?”

This week Mr Inan sold an unrenovated three-bedroom Caulfield house for more than $2.6 million five days after it was listed. It was advertised with a price range of $2.3 million to $2.5 million and received offers from five people who had never set foot in the property. The vendors took their own photos as professional photographers were banned from entering the premises.

He also recently sold a sight unseen three-bedroom Californian bungalow in Elwood for $1.97 million, almost $300,000 above the top of its estimated price range.

As weary Melburnians emerged from last year’s 15-week lockdown, property listings rose by 292 per cent and the city’s median house price increased by 4.5 per cent for the December quarter.

But Domain’s chief of research and economics Nicola Powell suspects the post-lockdown price rise won’t be as significant this time due to the “psychological hurdle” of Melbourne’s median house price now sitting above $1 million.

“Affordability will start to restrain buyer budgets which will have an impact on the pace of price growth in Melbourne,” Dr Powell said.

Victorian Premier Daniel Andrews has pledged that private inspections of unoccupied properties will go ahead once 70 per cent of Victorians have received at least one dose of a coronavirus vaccine, a milestone estimated to occur on September 23.

But that’s too little, too late, according to the Real Estate Institute of Victoria and Real Estate Buyers Agents Association of Australia.

The peak bodies have been lobbying the state government to immediately allow one-on-one property inspections, arguing they are an essential service for renters, homeowners and prospective buyers. They point out that private inspections have been allowed to continue in every other Australian jurisdiction, except the ACT, during lockdowns.

“Housing has been essential from the beginning of time,” said buyers agent Mark Errichiello. “You need air, water and shelter.”

Mr Errichiello said sight unseen purchases could be risky unless buyers planned to demolish or significantly renovate a dwelling.

“You are making a big financial decision based on limited information,” he said.

“You can’t walk through and get the precise dimensions or the feel of the space.”

Nelson Alexander property consultant Charlie Barham acknowledges sight unseen sales are not for everyone but said the move to virtual inspections had given many prospective buyers the confidence to vie for properties they’d never set foot in.

“They are becoming increasingly popular,” he said.

Mr Barham responded to Nikki’s queries about her Fitzroy North home and arranged for the vendor to take prospective buyers on a virtual tour via Zoom.

This was an invaluable experience, according to Nikki.

“The owner knew a lot about the neighbourhood,” she said. “He pointed out all the features and if we had any questions, we could type them into a chat box. I wanted to know the condition of the decking, so he went up to the deck and showed us a close up.”

Nikki doesn’t regret her decision and did her due diligence, arranging a comprehensive building and pest inspection and scoping out the neighbourhood.

“I like the property and I’m content with the price,” she said. “At the end of the day I am the one who’ll be living there.”

Storm Evert latest: Where will be hit by 50mph storm today?