Labour will give 16 and 17 year-olds the right to vote at a second Brexit referendum, Sir Keir Starmer has suggested as he said eventually the party will campaign to keep the UK in the EU.

The shadow Brexit secretary told an event at Labour’s annual conference in Brighton that he had ‘long championed’ votes at 16.

He said that young people will ‘have to live with’ the Brexit vote longer than their older colleagues and as a result they should be given a say on whether the UK splits from Brussels.

An overwhelming majority of the 18-24 year-olds who voted in the 2016 EU referendum backed Remain.

Anti-Brexit campaigners believe lowering the voting age would further boost the chances of cancelling the UK’s departure from the bloc.

Meanwhile, Sir Keir risked pouring fuel on Labour’s Brexit fire after he suggested that the party will ultimately back Remain.

Labour activists voted yesterday to keep the party neutral on Brexit until after the next general election.

If Jeremy Corbyn wins that election he would immediately legislate to hold a second referendum within six months and Labour would decide its final Brexit stance at a special one-day conference.

Sir Keir said the pro-EU core of the Labour membership meant it was ‘very likely’ the party will ‘end up’ backing Remain. 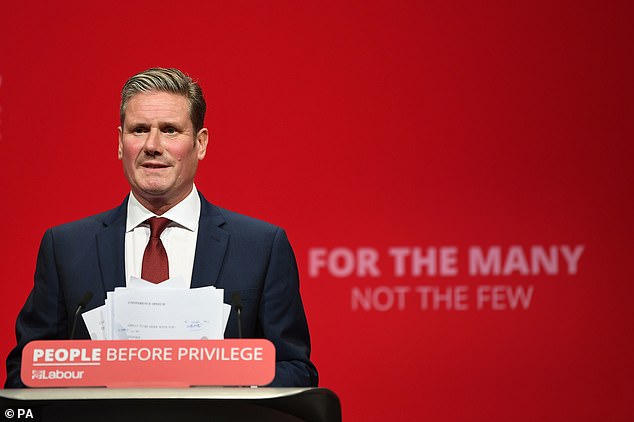 Sir Keir Starmer, pictured in Brighton yesterday, said 16 and 17 year-olds should be allowed to vote at a second Brexit referendum 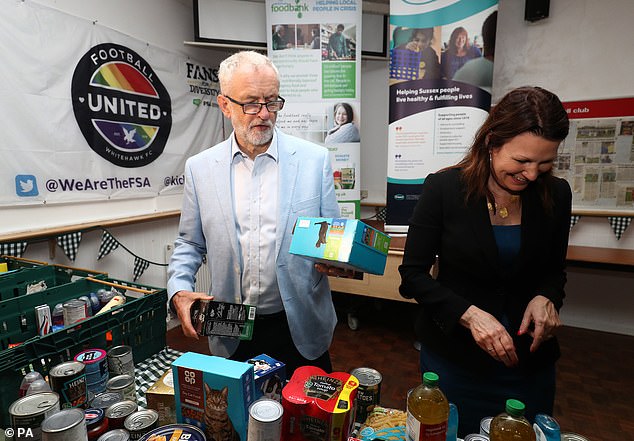 Jeremy Corbyn, pictured at a food bank in Brighton today, will keep Labour neutral on Brexit at the next general election

Numerous Labour figures have called for the voting age to be lowered both for a second referendum and for general elections.

Asked if he wanted 16 year-olds to be given the vote, Sir Keir told a Politico event: ‘Yep. I have long championed votes for 16 and 17 year olds. Not just on the referendum but in elections.

‘I think for the referendum, it is obvious that younger people are going to have to live with this for longer, and therefore we have to listen to them and we have to involve them in decision-making.’

The Labour frontbencher also said he wanted to ‘look at’ whether foreign nationals should also be allowed to vote at a second Brexit referendum.

This year’s Labour conference has been dominated by Brexit as Remainers tried to force Mr Corbyn to get off the fence and campaign for the UK to stay in the EU.

Delegates yesterday agreed to stick with Mr Corbyn’s neutral policy after a series of chaotic votes in the main hall which left pro-EU critics accusing the leadership of a ‘stitch-up’.

Sir Keir, who said he wanted to campaign to Remain, said he was ‘disappointed’ by the outcome of the votes.

But he suggested eventually Labour will back staying in the EU as he said it is ‘obvious where this is going to end up’.

‘I have got a pretty clear idea of where the members are on this, and therefore I think it is very likely the members will want us to campaign for Remain,’ he said.

‘We campaigned for Remain in 2016, we are currently campaigning for Remain against any Tory outcome, and it seems to me obvious where the membership is.’

Sir Keir said he had ‘mixed feelings’ about Mr Corbyn’s plan to stay neutral on Brexit during a general election.

‘I personally think it is better to say campaign to Remain and that is what I have said,’ he told Politico.

‘I don’t think there is a deal that is going to be as good as the deal we have got.’

Under Mr Corbyn’s plan, he would win the next election and then negotiate a new Brexit deal with the EU.

That deal would then be pitted against Remain at a second referendum, with Mr Corbyn vowing to deliver on whichever way the nation voted.

Coronavirus: What the UK can learn from Italy about coping with COVID-19