Republican officials and candidates in at least three battleground states are pushing to disqualify thousands of mail ballots after urging their own supporters to vote on Election Day, in what critics are calling a concerted attempt at partisan voter suppression.

In Pennsylvania, the state Supreme Court has agreed with the Republican National Committee that election officials should not count ballots on which the voter neglected to put a date on the outer envelope – even in cases when the ballots arrive before Election Day. Thousands of ballots have been set aside as a result, enough to swing a close race. 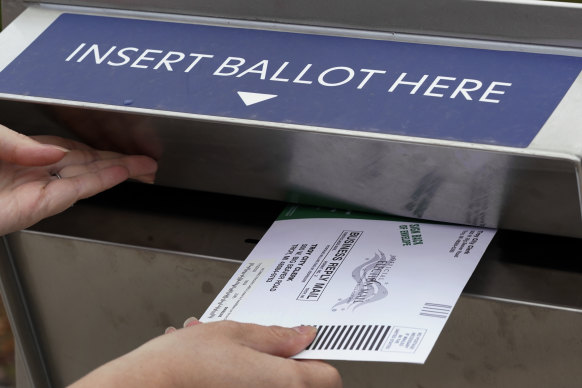 A Michigan voter inserts her absentee ballot into a drop box.Credit:AP

In Michigan, Kristina Karamo, the Republican nominee for secretary of state, sued the top election official in Detroit last month, seeking to toss absentee ballots not cast in person with an ID, even though that runs contrary to state requirements. When asked in a recent court hearing, Karamo’s lawyer declined to say why the suit targets Detroit, a heavily Democratic, majority-black city, and not the entire state.

And in Wisconsin, Republicans won a court ruling that will prevent some mail ballots from being counted when the required witness address is not complete.

Over the past two years, Republicans have waged a sustained campaign against alleged voter fraud. Experts say the litigation – which could significantly affect Tuesday’s vote – represents a parallel strategy of suing to disqualify mail ballots based on technicalities. While the rejections may have some basis in state law, experts say they appear to go against a principle, enshrined in federal law, of not disenfranchising voters for minor errors. 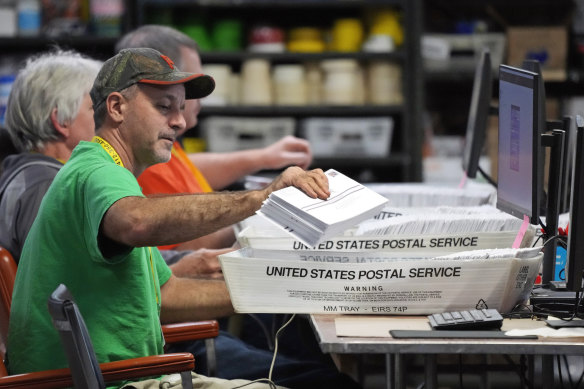 The suits coincide with a systematic attempt by Republicans – led by former president Donald Trump – to persuade GOP voters to cast their ballots only on Election Day. Critics argue that the overall purpose is to separate Republicans and Democrats by method of voting and then to use lawsuits to void mail ballots that are disproportionately Democratic.

“They’re looking for every advantage they can get, and they’ve calculated that this is a way that they can win more seats,” said Sylvia Albert, director of voting and elections for Common Cause, a nonpartisan democracy advocacy organisation.

“Research has shown that absentee ballots are more likely to be discarded if they are voted by young people and people of colour, which are not generally seen as the Republican base.”

Albert said legal battles over mail ballot eligibility have the potential to delay results and even change outcomes. In some cases, the disputes could wind up before the US Supreme Court.

The potential for chaos is especially high in Pennsylvania, where the legal fight is ongoing and could influence or postpone the outcome in some of the state’s tightest races, including a contest that could determine control of the US Senate.

Republican National Committee spokeswoman Emma Vaughn said in a statement that the committee sued in Pennsylvania “because we are simply asking for counties to follow the state law, which by the way, dozens of Democrats supported”.

“We look forward to continuing our legal actions to ensure that elections are administered in accordance with this bipartisan rule of law,” Vaughn added.

Pennsylvania Governor Tom Wolf issued a statement Sunday night in which he asserted that “no voter should be disenfranchised simply because they made a minor error in filling out their ballot”.

“This was not a controversial concept in our country or our commonwealth until recently, with the rise of the Big Lie and the efforts to spread mis- and disinformation in the days leading up to the general election,” Wolf continued. “I urge counties to continue to ensure that every vote counts.”

Election officials are braced for a repeat of a protracted standoff following Pennsylvania’s May primary between state officials and three counties – Berks, Fayette and Lancaster – that refused to include undated ballots in their certified results.

Wolf’s administration sued those counties in July to force them to include the ballots, the majority of which were cast by Democrats, court records show. In August, a state judge ordered the counties to include “all lawfully cast ballots,” including those with missing dates, in their certified results.

Republicans then successfully persuaded the state Supreme Court to reverse that policy for the general election in a decision released last week. The state court deadlocked on whether rejecting the ballots was a violation of voters’ federal civil rights.

Common Cause and others quickly filed a federal suit seeking to overturn the state court ruling on the grounds that rejecting ballots over a technical error violates the Civil Rights Act. The case remains pending.

The date printed on the envelope of a mail ballot is a “meaningless technicality” that has no bearing on officials’ ability to judge whether the ballot has been cast on time by a qualified voter, the complaint says.

The date requirement originated when Pennsylvania allowed certain ballots to arrive after Election Day so long as the voter attested to casting it by the date of the election. Now, ballots must be received by Election Day.

The federal courts have already weighed in on the issue: Earlier this year, the US Court of Appeals for the 3rd Circuit found that failing to count undated mail ballots is a violation of federal civil rights law. However, the US Supreme Court injected uncertainty into the issue by vacating that decision and instructing that the case be dismissed as moot because the election in question had already passed.

In the meantime, voting rights groups and others have launched a full-court press to notify voters across Pennsylvania whose ballots had been rejected and needed to be fixed or replaced. At least 7000 such ballots have been rejected statewide for a variety of reasons, including the missing date, according to data compiled by the Pennsylvania Department of State. Activists said the figure is probably much higher because many counties have refused to publish the information.

In Philadelphia, the state’s largest city and a Democratic bastion, more than 2000 such ballots have been rejected. Election officials posted lists of voters online with instructions to come to City Hall up through Election Day to cast a replacement ballot. Nick Custodio, a deputy city commissioner, said in a telephone interview that a steady trickle of residents showed up over the weekend to vote anew.

Shoshanna Israel, a coordinator with the liberal Working Families Party in Philadelphia, said her organisation assigned 49 volunteers to contact voters with ballots needing a fix. The group has contacted 1800 voters since last Tuesday.

But not everyone can make it to City Hall.

“I am totally disabled,” said Jean Terrizzi, 95, who was listed as having returned a ballot with a missing date. She added that she had an important medical appointment on Monday and would just have to “let it go” and not have her vote counted.

“This voting situation is terrible,” she said, declining to state her political affiliation. “It’s very disgraceful.”

Republicans also sued to block counties from notifying voters who neglected to date their ballots to give them the chance to fix them. The effort failed, but counties may choose whether to do so, meaning not all voters will be given an opportunity to correct ballot errors.

Small numbers of votes could make a difference in the sort of close races to which Pennsylvania has become accustomed.

“If you can eliminate 1 percent of the votes and they tend to lean Democratic, then that gives you that statistical advantage,” said Clifford Levine, a Pittsburgh-based election lawyer for Democrats.

“This is not about stopping fraud,” Levine said. “It’s about discounting mail ballots. There’s just no question.”