Deal to lease entire Tulagi island was signed a day after China and the Solomons officially established diplomatic ties. 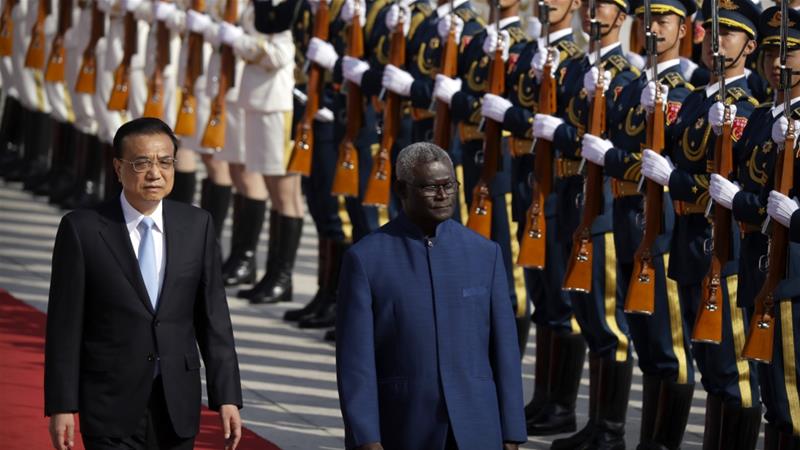 A Chinese company’s attempt to lease an entire island in the Solomon Islands was unlawful and would not be allowed to go ahead, the Pacific country’s government said on Friday.

The deal between the Solomons’ Central Province and the state-owned China Sam Group was “unlawful, unenforceable and must be terminated with immediate effect”, Prime Minister Manasseh Sogavare’s office said in a statement.

It said the provincial government did not have the power to negotiate the agreement regarding Tulagi island, which has the type of deep-water harbour coveted by the military.

In addition, it said China Sam did not have foreign investor status in the Solomons and no deal could be finalised without the approval of Attorney General John Muria.

“It is settled practice that all agreements involving the Solomon Islands government, which includes the provincial governments, must be vetted by the Attorney-General before it is executed,” the statement said.

“The agreement was not vetted by the Attorney General’s chambers before signing.”

But the deal only became public earlier this month when the media obtained copies of the document.

A signatory to the agreement, Central Province Premier Stanley Manetiva, did not immediately respond to questions on Friday.

In a statement on its website, Sam Group said its representatives had met Solomons Prime Minister Manasseh Sogavare in early October during a state visit to China by a delegation from the Pacific island nation.

Tulagi, an island about two square km (0.8 square miles) with a population of 1,200, is the site of a former Japanese naval base and was the scene of fierce fighting in World War II.

The agreement with China Sam mentioned developing a refinery on the island, but the United States and Australia would have been concerned at its potential for dual use as a Chinese military base.

The Solomons was previously Taiwan’s largest ally in the Pacific region and the decision to ditch Taipei for China after months of speculation was seen as a major diplomatic coup for Beijing.

Days later another Taipei loyalist in the region, Kiribati, did likewise, leaving Taiwan with only four nations that officially recognise it in the Pacific and 15 worldwide.

China has become more assertive in the Pacific as its economic might has grown. It sees Taiwan as a renegade state which will eventually be unified with the mainland, by force if necessary.

Other regional heavyweights, particularly Australia, fear Beijing’s ultimate aim is to set up a naval base in the Pacific which would dramatically increase its military footprint in the area.