Belgrade: Large numbers of Russians rushed to book one-way tickets out of the country while they still could on Wednesday after Russian President Vladimir Putin announced a partial mobilisation of military reservists for the war in Ukraine.

Flights filled up quickly and the prices of tickets for remaining connections skyrocketed, apparently driven by fears that Russia’s borders could soon close or that Putin could later announce a broader call-up that might send many Russian men of fighting age to the war’s front lines. 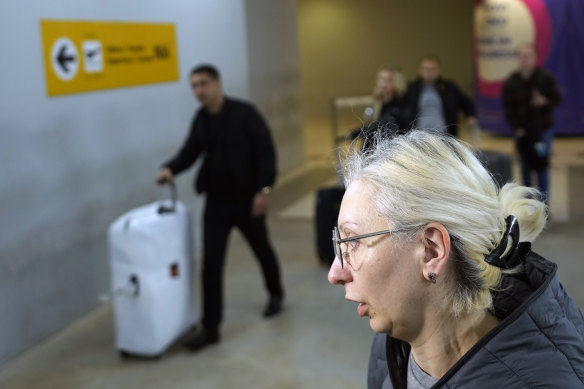 A passenger from the Moscow-Belgrade flight operated by Air Serbia in Belgrade.Credit:AP

Tickets for the Moscow-Belgrade flights operated by Air Serbia, the only European carrier besides Turkish Airlines to maintain flights to Russia despite a European Union flight embargo, quickly sold out for the next several days. The price for flights from Moscow to Istanbul or Dubai increased within minutes before jumping again, reaching as high as £9200 euros ($13,600) for a one-way economy class fare.

Putin’s decree stipulates that the amount of people called to active duty will be determined by the Defence Ministry. Defence Minister Sergei Shoigu said in a televised interview that 300,000 reservists with relevant combat and service experience initially would be mobilised.

Russia has seen a marked exodus of citizens since Putin ordered his troops to invade Ukraine almost seven months ago. During Putin’s address to the nation on Wednesday in which he announced the partial mobilisation of reservists, he also issued a veiled nuclear threat to Russia’s enemies in the West. 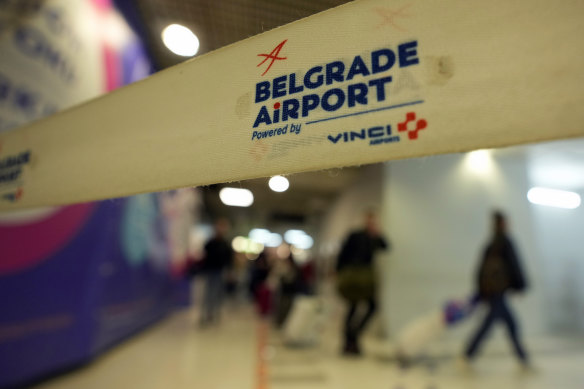 Large numbers of Russians rushed to book one-way tickets out of the country while they still could Wednesday after Russian President Vladimir Putin announced a partial mobilisation of military reservists for the war in Ukraine.Credit:AP

Reports of panic spreading among Russians soon flooded social networks. Anti-war groups said the limited airplane tickets out of Russia reached enormous prices due to high demand and swiftly became unavailable. Social networks in Russian surged with advice on how to avoid the mobilisation or leave the country.

Some postings alleged people already had been turned back from Russia’s land border with Georgia and that the website of the state Russian railway company had collapsed because too many people were checking for ways out of the country.

The OVD-Info monitoring group said over 800 Russians were arrested Wednesday in anti-war protests in 37 Russian cities, including Moscow and St. Petersburg. Protesters in Moscow chanted “No to war!” and “Life to our children!”

Russian officials sought to calm the public, stressing that the call-up would affect a limited number of people fitting certain criteria. However, conflicting statements and a lack of details helped fuel the panic.

The head of the Duma’s defence committee, Andrei Kartapolov, said there would be no additional restrictions on reservists leaving Russia based on this mobilisation. But he also advised individuals who could be eligible for the call-up against “travelling to resorts in Turkey.”

“Spend your vacation at the resorts of Crimea or (Russia’s southern) Krasnodar region,” Russian media quoted Kartapolov as saying.

A group based in Serbia, called Russians, Belarussians, Ukrainians and Serbs Together Against War, tweeted that there were no available flights to Belgrade from Russia until mid-October. Flights to Turkey, Georgia or Armenia also sold out, according to the Belgrade-based group.

“All the Russians who wanted to go to war already went,” the group said. “No one else wants to go there!”

One Russian man named Sergey said he had prepared for a Russian mobilisation scenario and quickly brought his 17-year-old son out of Russia.

“The tickets didn’t cost too much, as I was probably quick enough. And we got through the border just fine,” he said upon arriving on Wednesday at the airport in the Armenian capital of Yerevan.

His son, Nikolai, said, “I haven’t gotten a letter from the recruitment office yet” but he was still researching possible exemptions, “so we left.” They declined to give their last names.

Serbia’s capital of Belgrade has become a popular destination for Russians during the war. Up to 50,000 Russians have fled to Serbia since Russia invaded Ukraine in February and many have opened businesses, especially in the IT sector.

Russians don’t need visas to enter Serbia, which has not joined Western sanctions against Russia for its aggression in Ukraine. Allies such as Belarus and China also have not imposed sanctions on Russia.

A Wednesday flight from Moscow to Belgrade was packed with young Russian men who said they could not speak to reporters because they feared negative repercussions for the families they left behind. A Russian woman, who identified herself as Yulia, said she, too, was afraid “my government and police” might see her remarks.

“But I want to say, ‘Freedom for Ukraine.’ Please, somebody stop Putin,” she said.