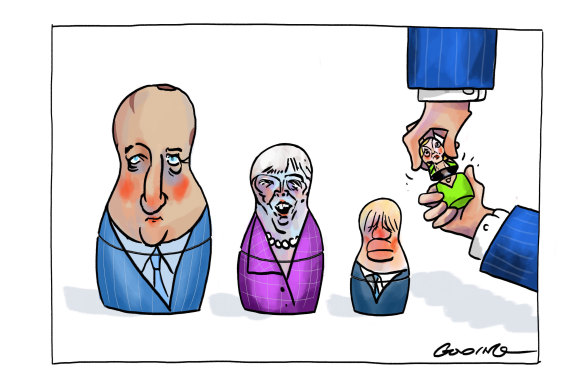 Everything is affordable when you are spending someone else’s money, in this case the taxpayers’ (“Public servants spent more than $3.7m on business class flights”, The Sunday Age, 16/10). Allowing staff to fly business class on short flights is a waste of money.

In view of its long history of mismanaging defence procurement and maintaining budget discipline, it was no surprise that the Department of Defence was the biggest spender on domestic business class travel.

That three departments did not bother to release the details of their travel in accord with the statutory deadline shows the contempt with which they view the taxpaying public.
Maurice Critchley, Mangrove Mountain, NSW

I suggest he’s been handed a poisoned chalice with explosive contents by the Reserve Bank and the Coalition government. Reserve Bank Governor Philip Lowe was too slow to reduce rates and now he’s moving too quickly and too heavily to raise them.

Lacking any sense of direction, the Morrison government fluctuated from policy vacuum to populist short-term panic.

Wright posits that “the new government has to deal with some fiscal landmines left by the previous administration”.

A juggler working with 10 awkwardly shaped balls would have an easier task.
Kevin Burke, Sandringham

I’m happy as it is
I, too, have a rental property (“Greed is not good”, Letters 22/10) next door to where I live, and rented to a very good tenant through a real estate agent for $405 a week.

I have just received a very glossy document from the agent urging me to increase the rent by at least $65 a week, and perhaps even $110, because that’s what the market would support.

A silent disgrace
Your correspondent (“Wider than gig work”, Letters, 22/2) might shock some readers with the revelation that a university employed her for more than
20 years without any holiday and sick pay or long service leave.
This commercialisation of university conditions has developed under governments from both major parties. A silent national disgrace, and correcting it should be a priority for a government calling itself Labor.
Tony Haydon, Springvale

Get back to basics
I’m a long-time Greens voter and I specifically refused to vote for Lidia Thorpe at the last election. To me, she represents everything about the decline and loss of environmental focus of the party.

The Greens need the courage to become once again not a single-issue party but one focused around a single issue – the environment.

If this means expelling Thorpe, and I believe it does, then so be it. Better to have her making problems outside the tent than in it.
Mark Freeman, Macleod

It felt like we owned it
My father came to Australia as a refugee from Hitler’s Germany. He had two degrees, which were eventually accepted, so he went from foreman in a munitions factory to a leader in an industry that dealt with power. All my life, he spoke of the State Electricity Commission with huge respect.

Later, when I was building a house, a bunch of men arrived to connect my power. “Did the builder call you?” I asked “No,” they said, “we know everything because we’re local.”

How uncomplicated, how reassuring and such a straightforward title. The State Electricity Commission. It felt like we owned it.
Carol Oliver, Carlton

Lock it in, Premier
Daniel Andrew’s plan to establish a state-owned energy company is to be commended, but he needs to ensure (with legislation) any future government would not be able to sell it off.

The privatisation of the State Electricity Commission in the 1990s by Jeff Kennett has led to poor outcomes for consumers, and is partly responsible for our exorbitant power bills.
Bill O’Connor, Beechworth

Off the table
Cigarette company sponsorship of sports and the arts thankfully ended when the community ruled that the providing of marketing benefit to tobacco companies was out of alignment with the values of the players, organisations and the general community.

Sponsorships by fossil fuel and betting companies are now leaving players and supporters compromised, and it is time for all sporting and cultural organisations to develop clear values criteria that sponsorship opportunities need to align with.

Providing a marketing platform for gambling, oil and gas, and alcohol needs to be off the table.
Peter Allan, Brunswick West

Michael Bachelard sends an exclusive newsletter to subscribers each week. Sign up to receive his Note from the Editor.

World War 3 fears: Russia brags about S-500 missiles which can shoot down satellites

Man, 19, with a severe nut allergy served them THREE times by BA crew