New Delhi: India's opposition Congress party selected past president Sonia Gandhi as its interim leader on Saturday, while it searches for a successor to her son Rahul Gandhi, who quit following a crushing election defeat by Prime Minister Narendra Modi.

The Congress Working Committee unanimously decided to appoint Sonia Gandhi as "interim president pending the election of a regular president," the party said in a statement late on Saturday night. 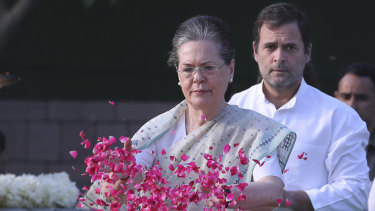 Sonia Gandhi has been named interim president of the United Progressive Alliance after her son Rahul Gandhi (right) resigned. Credit:AP

The committee wanted Rahul Gandhi to continue as its president but after he refused, they asked his mother to take over the reins instead, and she accepted, the statement said.

Sonia Gandhi is one of the most influential leaders of the Congress party and is credited with having brought the party back from the brink in 2004 with a surprise victory over the incumbent central government.

The widow of assassinated former Prime Minister Rajiv Gandhi, she was also the party's longest serving president with 19 years at the helm, from 1998 to 2017, before handing over the baton to her son.

Congress, founded in 1885, is India's oldest political party and dominated the country for decades after independence, led by generations of the Nehru-Gandhi family. The family produced three prime ministers: Jawaharlal Nehru, India's first and longest-serving leader, his daughter Indira Gandhi and her son Rajiv.

However, Italian-born Sonia Gandhi faces a tall order to pull the party out of its worst crisis in decades and at the same time choose a worthy and dependable successor.

Party leaders and foot soldiers alike have been defecting to the ruling BJP. Remaining members have been dismayed at the party's leadership vacuum following Modi's re-election with a majority that surpassed his victory in 2014, and are questioning the party's survival.

Rahul Gandhi, 49, announced his decision to quit as Congress leader in May, but the party leadership refused to accept it. They pressed him to reconsider, saying the party needed a unifying figure from the family to avoid splintering.

The party thanked Rahul Gandhi for his "exceptional leadership" during the state and general elections.

Last month in the southern state of Karnataka the defection of more than a dozen legislators from the ruling Congress-led coalition paved the way for Modi's BJP to form a government.

Congress also appeared split in its response to Delhi's decision to strip the state of Jammu and Kashmir of special constitutional status on Monday after putting the region on lockdown.

Some Congress members, including senior leader Jyotiraditya Scindia came out in support of the decision, and local media reported many in the party were supporting him.

Rahul Gandhi told reporters on Saturday night in New Delhi that considering there were reports of violence in Jammu and Kashmir, the government should provide transparent information about the actual situation on the ground.

New year, new look! 7 items to refresh your bathroom — all $30 or less