Omicron-stricken South Africa today saw a huge rise in Covid-related hospitalisations as the highly infectious variant continued to spread through the country.

Data from the country’s National Institute for Communicable Diseases (NICD) reported 507 people being taken to hospital with the virus, an 81 per cent rise on last week.

Deaths however fell by 20 per cent, although sadly 20 people were reported to have died with the virus in the last 24 hours.

The majority of new cases today are from Gauteng region (49 per cent), the epicentre of the virus which covers Johannesburg and Pretoria, South Africa’s largest city.

While Gauteng still produces a huge number of cases, Mail analysis has suggested that the country’s Omicron outbreak has now peaked after the epicentre today saw a drop in cases of 20 per cent. 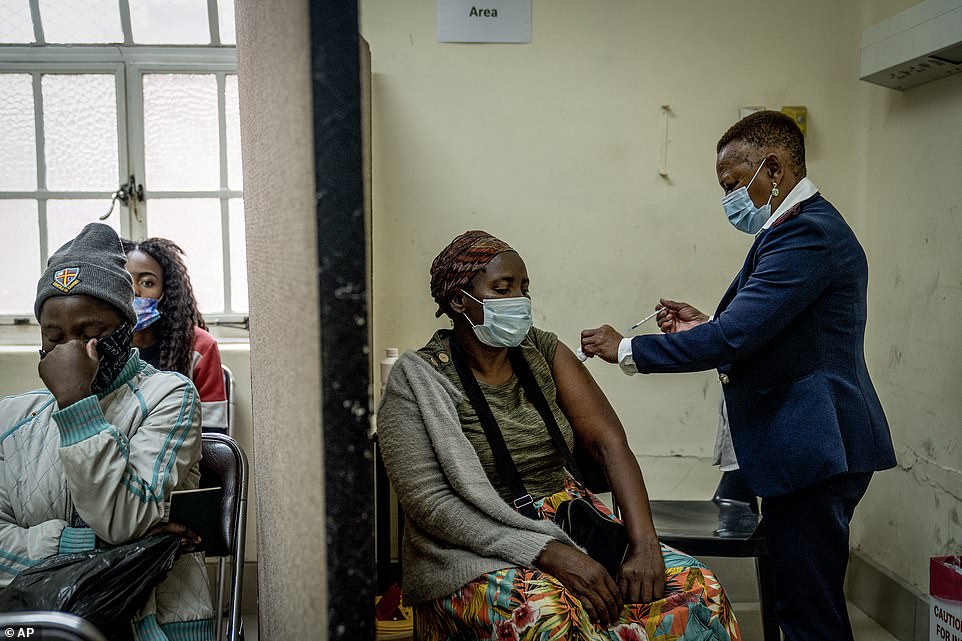 Data from South Africa’s National Institute for Communicable Diseases (NICD) reported 507 people being taken to hospital with the virus, an 81 per cent rise on last week 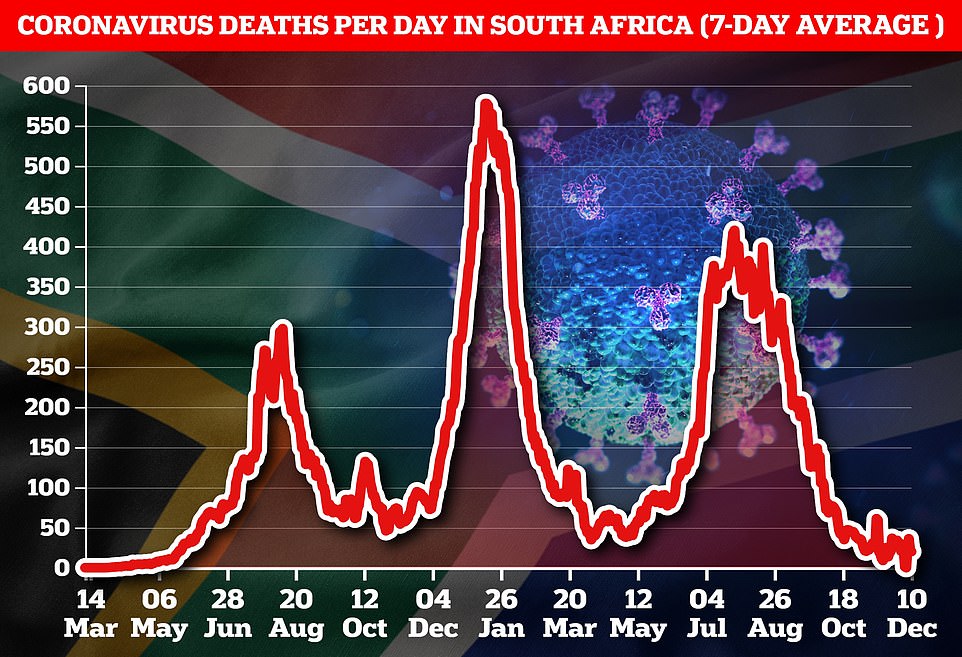 There were also 19,018 new COVID-19 cases, bringing the total number of laboratory-confirmed cases to 3,112,463. Deaths however fell by 20 per cent, although sadly 20 people were reported to have died with the virus in the last 24 hours 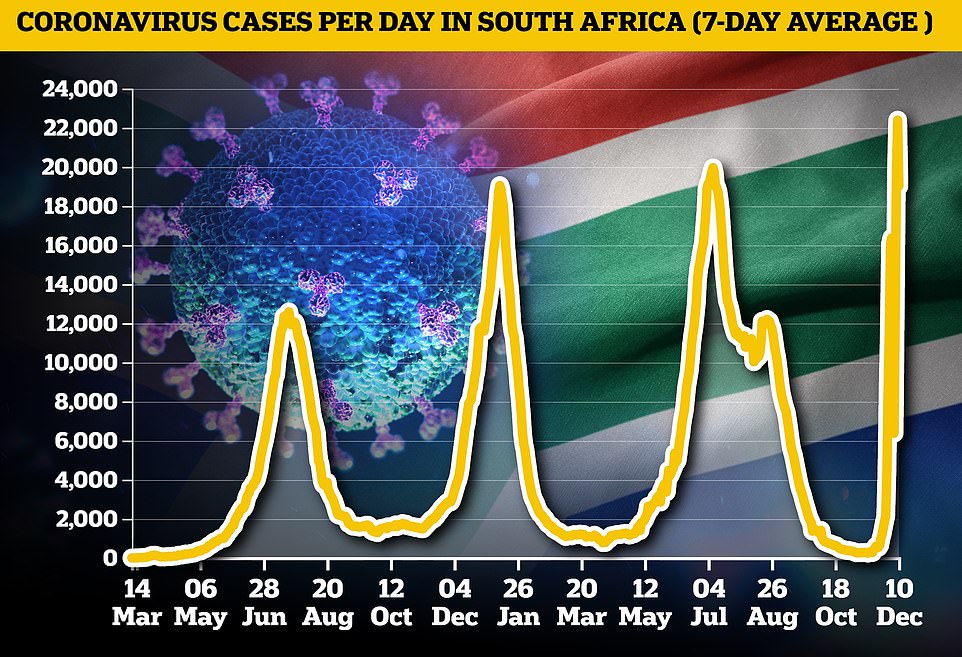 The majority of new cases today are from Gauteng region (49 per cent), the epicentre of the virus which covers Johannesburg and Pretoria, South Africa’s largest city 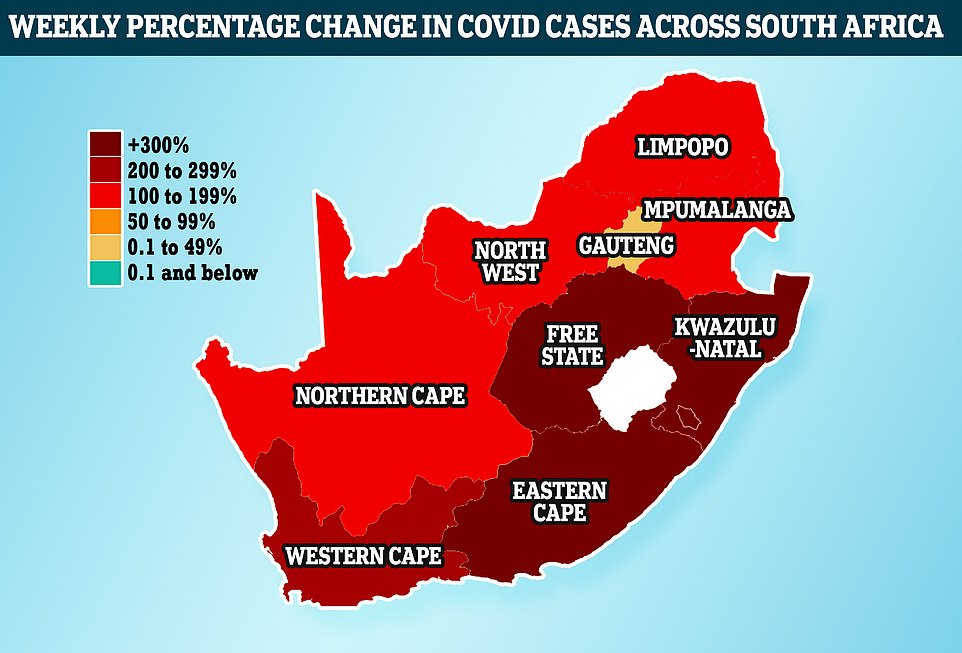 Gauteng province has seen a meteoric rise infections since mid-November, when the first cases of the highly-evolved strain started appearing — jumping from 58 to 11,703 as of yesterday.

Professor Christina Pagel, a mathematician at University College London who has been following the outbreak, said infections have been increasing at a rate of around 25 per cent per day in the region since November 15.

She said infections over the last four days have dipped below this trend, suggesting cases may be rounding off their previous exponential rise.

Omicron may be milder than Delta, WHO chief claims

But he stressed that more data was needed before drawing firm conclusions, and urged countries everywhere to boost their surveillance to help provide a clearer picture of how Omicron is behaving.

The hopeful assessments came as global concern grew over the heavily mutated variant, which has forced dozens of nations to re-impose border restrictions and raised the possibility of a return to economically punishing lockdowns.

Even if it does turn out that Omicron causes less severe disease, Tedros warned against slacking off vigilance against the virus.

‘Any complacency now will cost lives,’ he warned.

‘That does not mean that the virus is unstoppable,’ he said.

‘But it means the virus is more efficient at transmitting between human beings. And therefore we have to redouble our efforts to break those chains of transmission to protect ourselves to protect others.’

Even if the new variant turns out to be less dangerous than previous variants, if it transmits more rapidly, it could still sicken more people, overburden health systems, ‘and more people die,’ he said.

The WHO experts stressed the importance of vaccination, highlighting that even if vaccines prove less effective against Omicron, as some data indicates, they are still expected to provide significant protection against severe disease.

Chief WHO scientist Soumya Swaminathan cautioned against knee-jerk reactions to early studies hinting that the Pfizer-BioNTech vaccine may have reduced efficacy against the new variant.

She pointed out that the studies done so far were small and that the reduction in the ‘neutralising activity’ varied dramatically between different studies, from four to five fold in some experiments to up to 40-fold in others.

They also only looked at the neutralisation of antibodies, when ‘we know the immune system is much more complex than that,’ she said.

‘So I think it’s premature to conclude that this reduction neutralising activity would result in a significant reduction in vaccine effectiveness,’ she said. ‘We do not know that.’

As a member of the UK’s Independent Sage Group, Professor Pagel has typically pushed for tougher restrictions and accused ministers of underestimating outbreaks. But her optimistic prediction suggesting Omicron may have burnt itself out in just a month in South Africa’s ‘ground zero’ province could suggest the UK’s outbreak will not be as large as some experts fear.

Writing on social media, she said: ‘There is some tentative good news out of Gauteng this week, suggesting that cases might be reaching a peak there.’

South Africa will next month start giving Pfizer booster shots against coronavirus, a health official said Friday, a day after the country reported a near-record high in daily cases of the disease.

‘The first people who will qualify for the booster dose in South Africa will be people over the age of 60 years,’ Dr Nicolas Crisp, director general at the health ministry, told a weekly news conference.

Experts are working to determine whether current Covid vaccines will work against the new highly-mutated variant, which was discovered by South African scientists last month.

The daily number of new Covid infections surged to 22,391 on Thursday, when nearly 30 percent of tests were positive.

The highest daily tally so far was in early July, when the country hit more 26,000 new infections.

South Africa is the worst-hit country in the continent for coronavirus, recording a cumulative 3.09 million cases, of which over 90,000 have been fatal.

A small study this week by the country’s African Health Research Institute, not yet peer reviewed, suggested that Omicron may be able to evade some of the antibody immunity from the Pfizer-BioNTech vaccine.

But, its authors said, there was no reason to believe that vaccination would not protect against from severe disease caused by the variant.

Slightly more than a quarter of South Africa’s population are fully vaccinated, with the figure among adults being 43 percent.

Despite the low vaccine uptake blamed on widespread hesitancy, South Africa is targetting to inoculate around 70 percent of its population by March 2022.

Last month it deferred taking delivery of more ordered doses because ‘we are getting vaccines in faster than we are using’ them, according to Crisp.

The economic hub of Gauteng province – which houses Johannesburg and the capital Pretoria – being the hotspot.

However, hospitalised patients are so far showing mild symptoms, he said.

An analysis of wastewater by the South African Medical Research Council (SAMRC) also established that Omicron is now the dominant variant in parts of the country including the tourist city of Cape Town.

‘We found the Omicron variant in 11 of 12 (92 percent) samples of wastewater collected from Cape Town treatment plants on 30 November,’ said Rabia Johnson, deputy director at the government research outfit in a Friday statement.

Saddam’s child victims are discovered and exhumed from mass grave

Some leaseholders of a stalled Alberta RV resort demand refunds