Flowers have been laid at the scene where more than 150 people were killed in a tragic Halloween stampede in South Korea yesterday.

The heartbreaking disaster happened in the country’s capital Seoul as thousands of people, mainly in their teens and 20s, headed to the Itaewon district for Halloween celebrations on Saturday night.

Today the country enters a period of national mourning to grieve the 154 people who were killed in the tragedy.

The country’s President, Yoon Suk-Yeol vowed a thorough investigation into what is one of the country’s worst-ever disasters.

Mourners were seen in the city leaving flowers, notes, candles and photo frames at the site of the deadly incident. Others were seen leaving funeral ode’s to the dead and praying on the narrow streets. 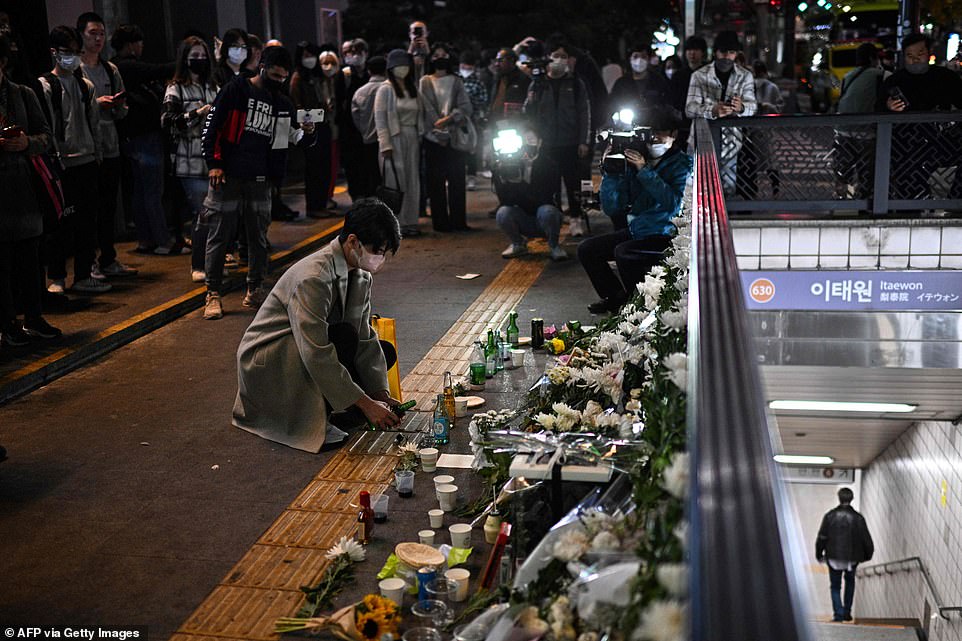 Flowers have been laid at the scene where 154 people were killed in a tragic Halloween stampede in Seoul, South Korea on Saturday night. It is estimated that as many as 100,000 people descended into the capital’s popular Itaewon district, known for its nightlife, leading the area’s narrow alleyways and winding streets to become clogged

Speaking in a televised address to the nation, he said the horrific incident was a ‘tragedy and disaster that should not have happened’.

He added that the government ‘will thoroughly investigate the cause of the incident and make fundamental improvements to ensure the same accident does not occur again’.

It is estimated that as many as 100,000 people descended into the capital’s popular district, known for its nightlife, leading the area’s narrow alleyways and winding streets to become clogged.

Witnesses who survived the crush described being trapped in narrow, sloping alleyways, scrambling to get out of the suffocating crowd as people piled on top of one another.

The interior ministry said that 20 foreigners were among those killed in the stampede which occurred around 10pm local time. A further 133 people were injured. 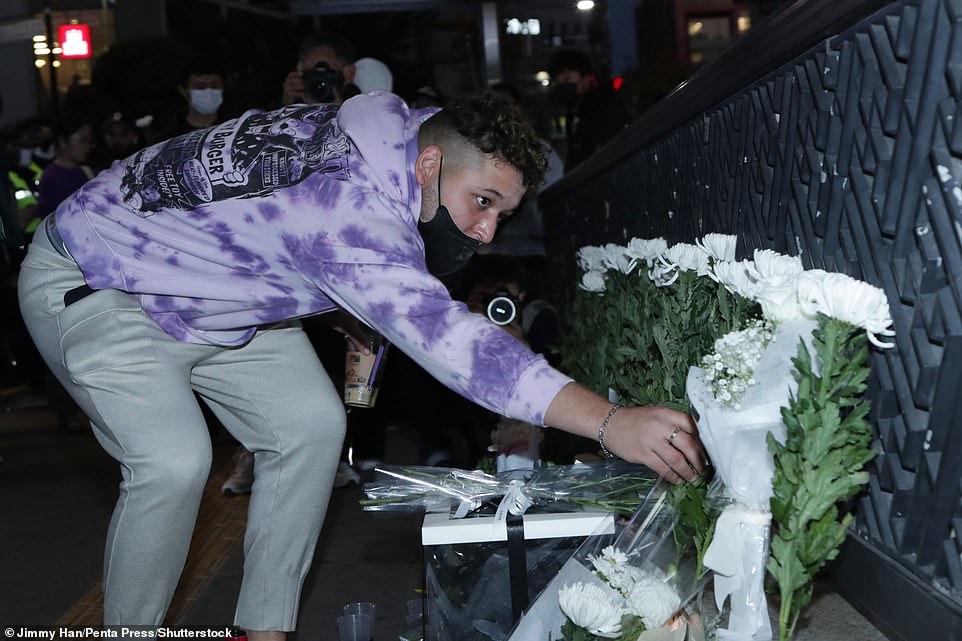 Today those grieving those killed, laid flowers at the scene of the horrific stampede. The country has now entered a period of national mourning to remember those killed. Officials have said most of the victims were young women in their 20s

Most of the victims were young women in their 20s. Officials from the defence ministry said that three military personnel were among the dead, with authorities saying that they had received reports of more than 2,600 people missing.

Foreigners from Uzbekistan, Austria, Norway, Vietnam, Kazakhstan, Iran, and Sri Lanka are also reported to be among those killed.

Paramedics who arrived at the scene became quickly overwhelmed by the number of victims and were begging passers-by to administer first aid, including CPR. 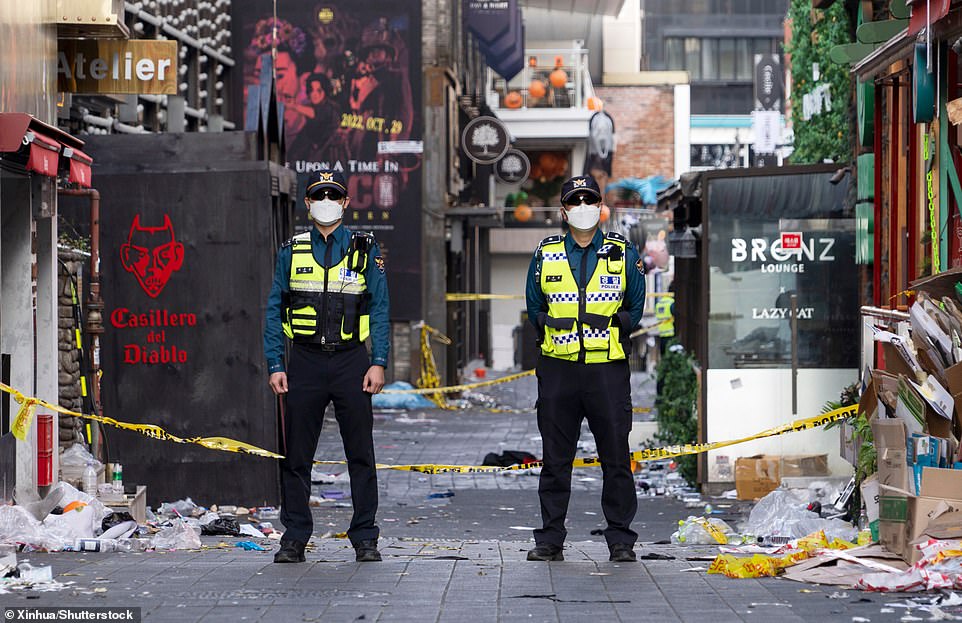 Officers guard the site of the deadly stampede in Itaewon, Seoul, as he country’s President, Yoon Suk-Yeol vowed a thorough investigation into what is one of the country’s worst-ever disasters

In an interview with local broadcaster YTN, Lee Beom-suk, a doctor at the event, described the chaos.

He said: ‘So many victims’ faces were pale. I could not catch their pulse or breathing and many of them had a bloody nose. When I tried CPR, I also drew blood out of their mouths.’

Prime Minister Han Duck-soo said: ‘Following the president’s directive, the government has decided to observe a national mourning period until midnight of November 5, during which the nation will mourn the perished.’

Seoul’s mayor, Oh Se-hoon, who rushed back to the country from a work trip in Europe, said his office would set up a memorial alter on Monday morning so the public could pay their respects to the victims. 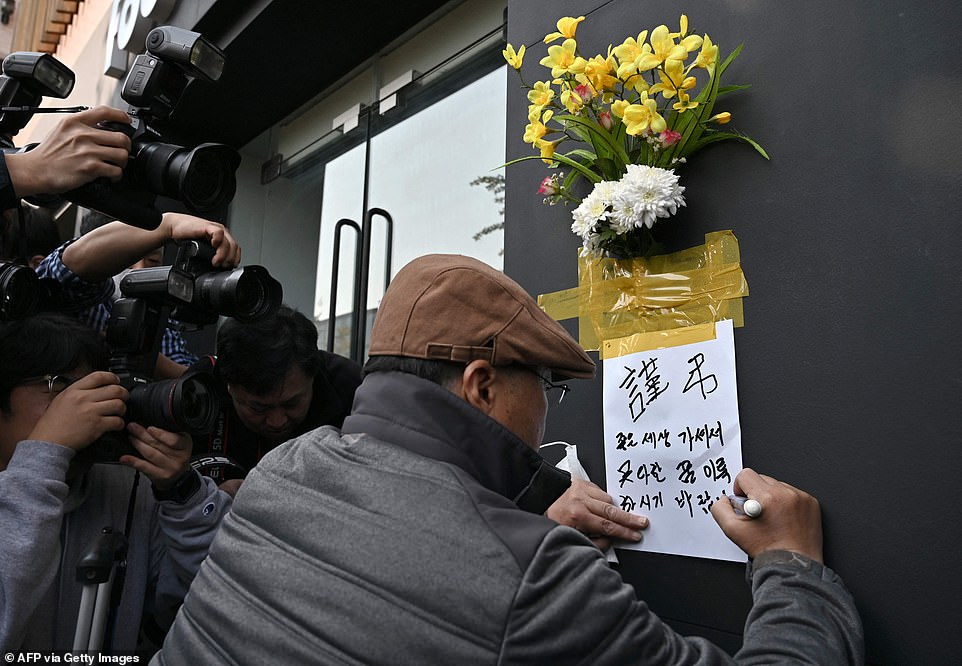 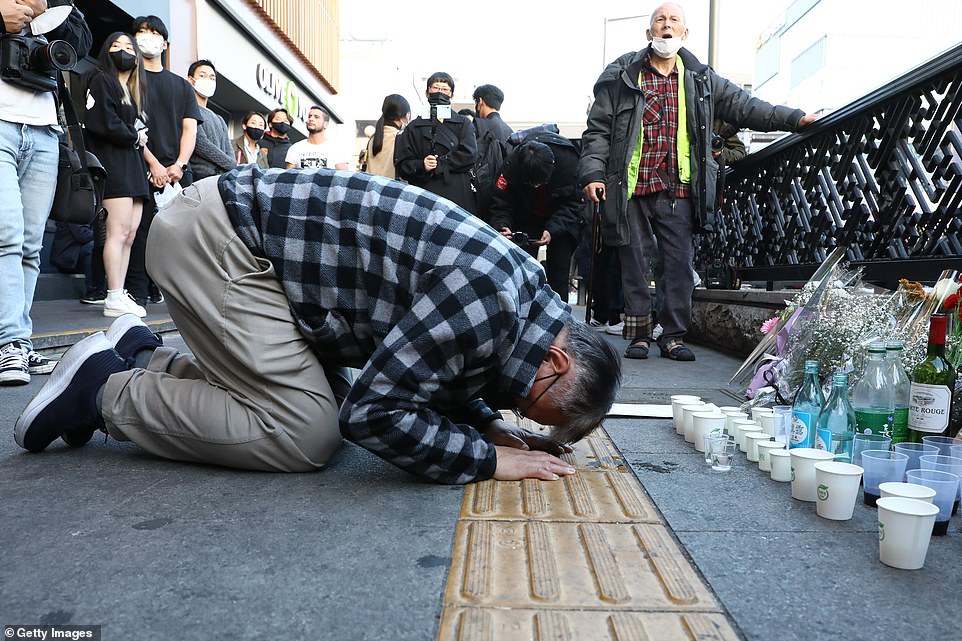 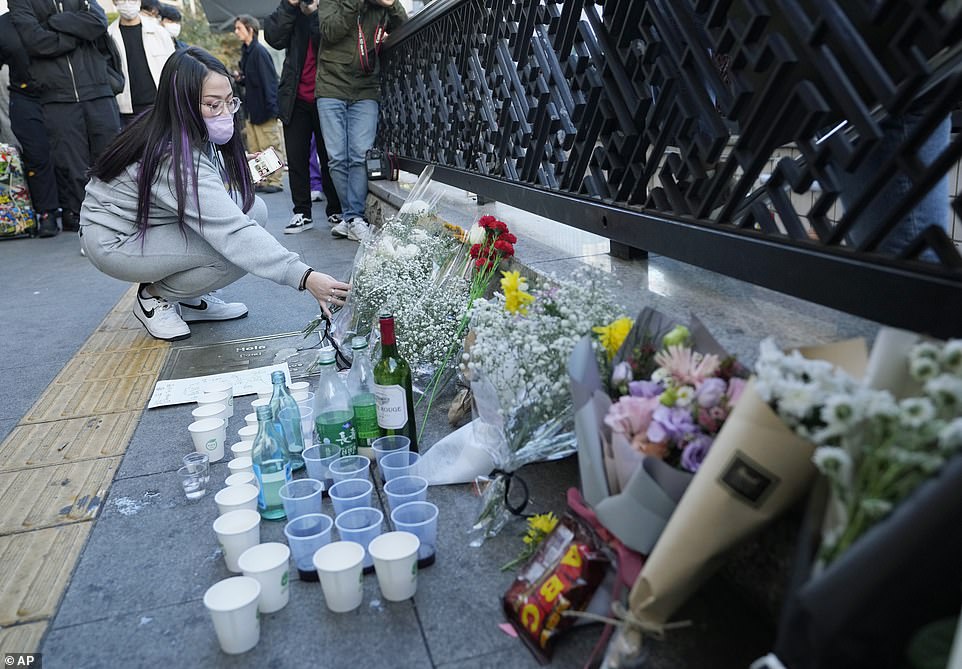 South Korea has declared a week of national mourning after more than 150 people died in a crowd crush at a street Halloween festival in the capital Seoul (pictured: A woman places a bouquet of flowers to pay tribute for victims near the scene)

Speaking following a visit to the site of the disaster he said: ‘Most of the casualties are young people like our sons and daughters, which makes it even more sad.’

It is still not entirely clear what caused the deadly crush. Early rumours, reported by Sky, suggested that people had flocked down the narrow streets after hearing a celebrity was in the popular party area.

Others have said that too many people could clog up the street after using it as a cut through to get through the main street with bars and nightclubs.

Due to strict pandemic restrictions and the fact South Korea was one of the slowest countries in the world to ease rules on socialising, it is the first Halloween in three years that youngsters in Seoul have been able to enjoy out. 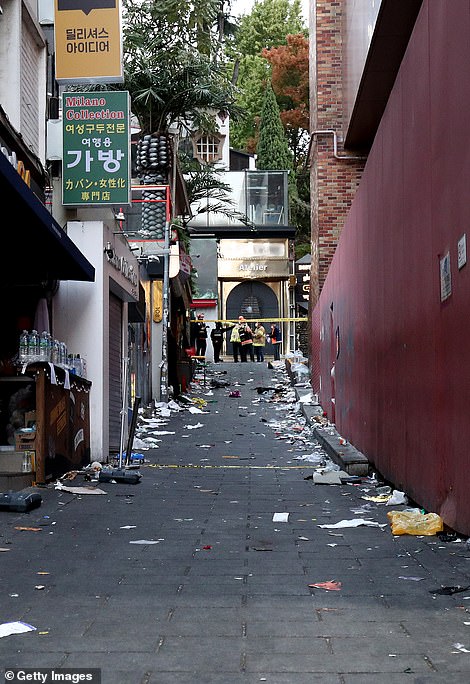 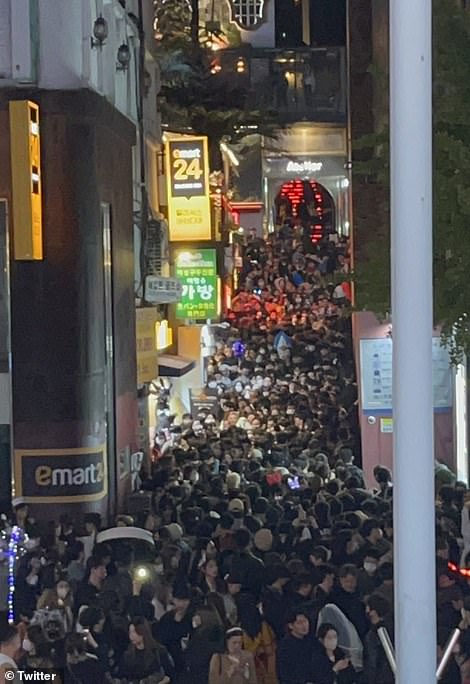 Left: The alleyway is seen early on Sunday morning. It remained cordoned off as police continued their investigations into the tragedy. Right: The same alleyway is seen shortly before the crush. Hundreds of people are shown packed in 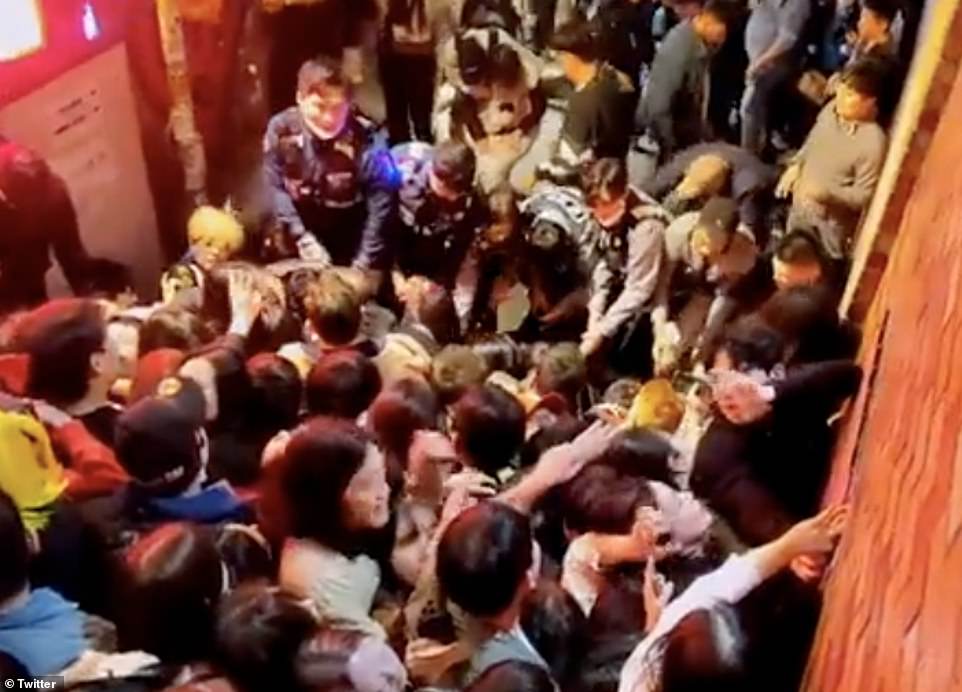 Witnesses have said there were early signs that the crowds had become too big after people were waiting 20 to 30 minutes to exit an underground station just two hours before the fatal accident.

One person who had been in the area told Sky that when they first saw emergency services arriving, they thought it was to finally manage the crowds, before later discovering what had actually happened.

An ambulance moving to the accident site was reportedly blocked by crowds of people while the police were heard using a loudspeaker saying: ‘Please go home. That’s what helps us. Please disband.’

Officials on Sunday said they had no clear idea of what caused the crush as witnesses described scenes of chaos in the moments leading to the stampeded. 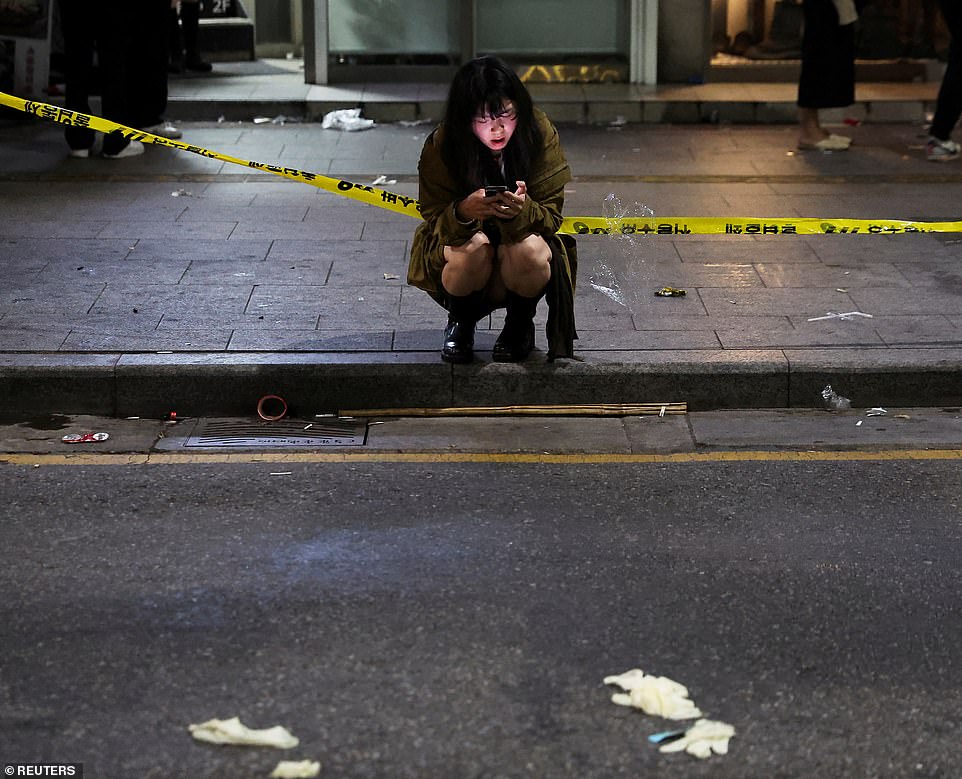 Those caught in the crush were left shocked, checking their phones to try and contact missing loved ones or hugging one another 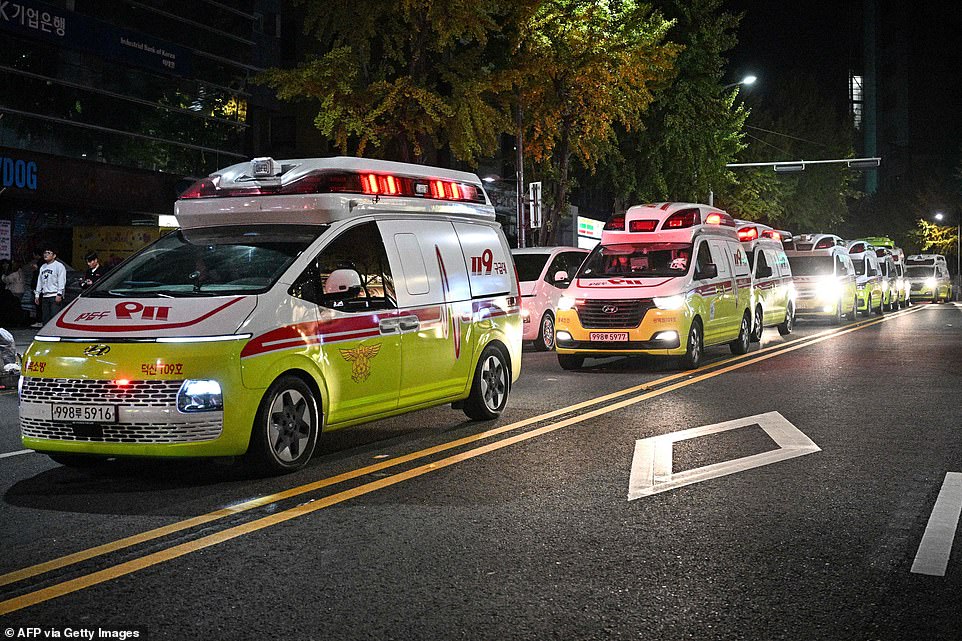 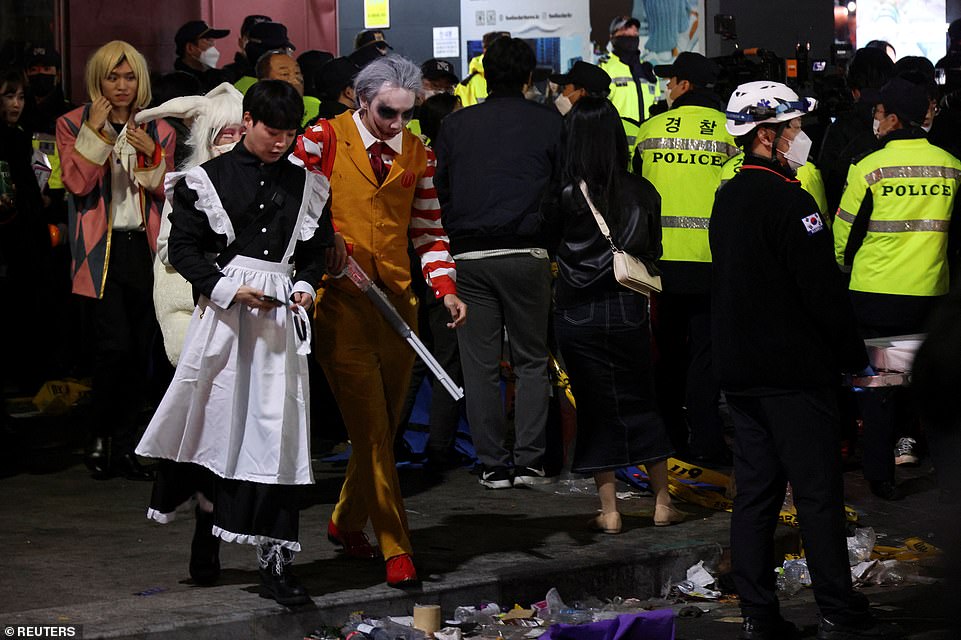 Local shopkeepers in the party district told AFP the number of people at the Halloween celebration was ‘unprecedently large’ this year.

Questions have now been raised over the lack of the security at the event with interior minister Lee Sang-min telling a briefing that the police force had been preoccupied on the other side of the town.

He said: ‘A considerable number had been deployed at Gwanghwamun where a large crowd was expected for a protest.’

Ken Fallas, a Costa Rican architect who has worked in Seoul for the past eight years, witnessed the horrific tragedy on Saturday night.

Attending the Halloween party in the city’s nightlife district, the 32-year-old became a front-row witness to the disaster. 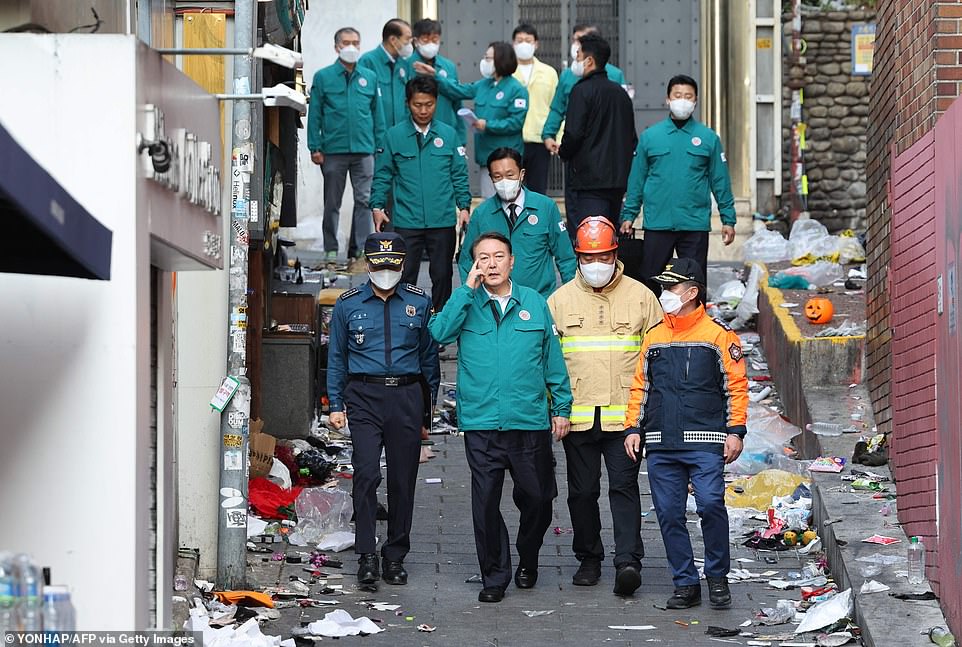 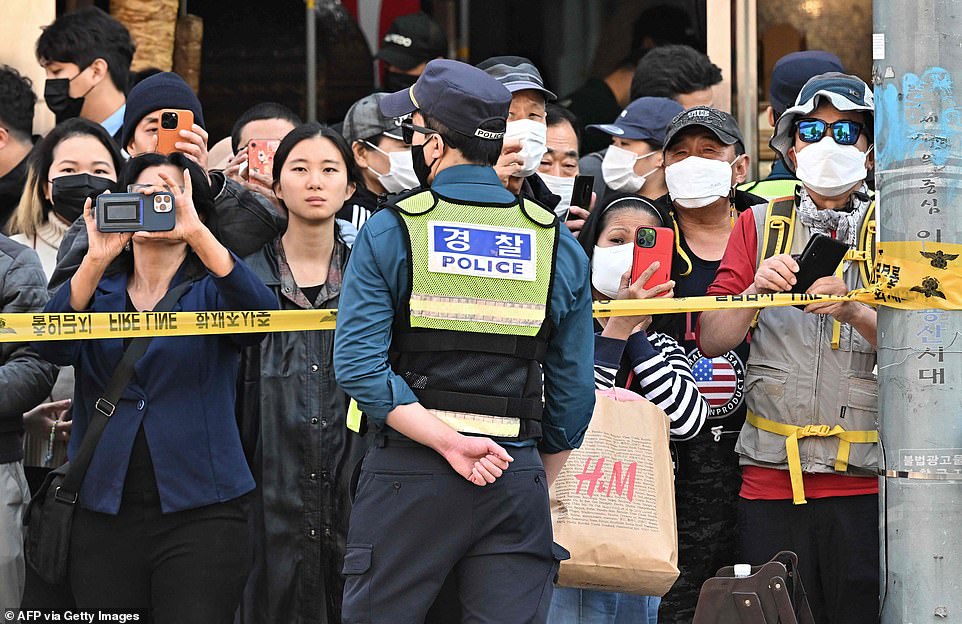 Mr Fallas and his friends were among the thousands of people pushing toward the alleyway. Recalling what he saw, he said: ‘We were we were unable to move back. The music was loud. Nobody knew what was happening.

‘People were still partying with the emergency happening in front of us. We were like, “What´s going on from here, where we can go?” There was no exit.’

He recorded the deadly crowd surge which showed groups of Halloween partygoers carrying out their unconscious friends, while others were seen administrating CPR to the injured as music blared out.

He added: ‘I saw a lot of people laughing, but I don´t think they were (really) laughing because, you know, what´s funny? 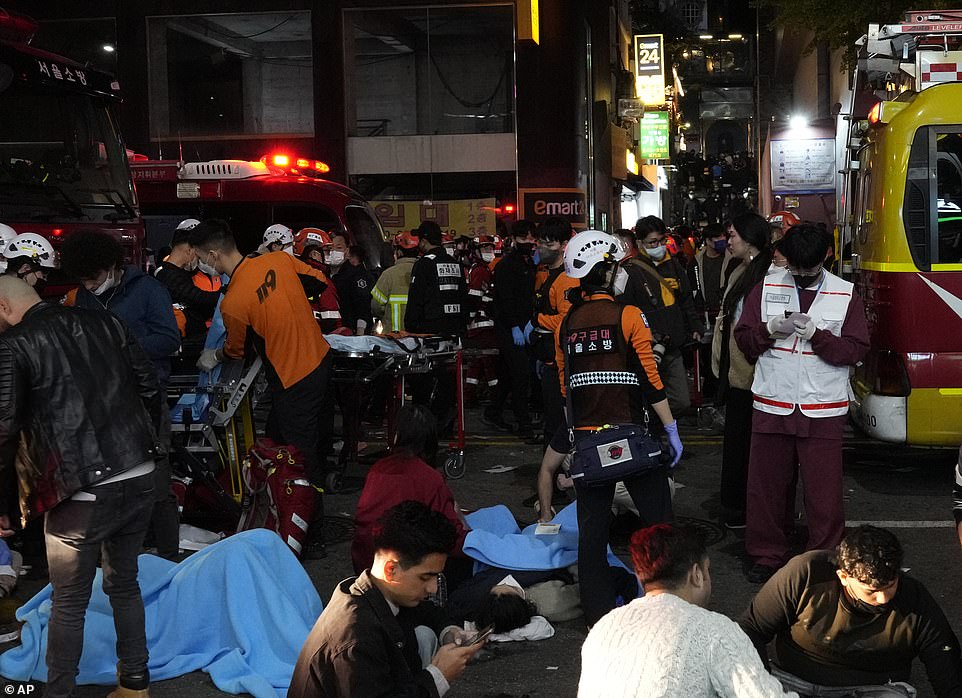 Rescue workers and firefighters try to help injured people near the scene in Seoul, South Korea 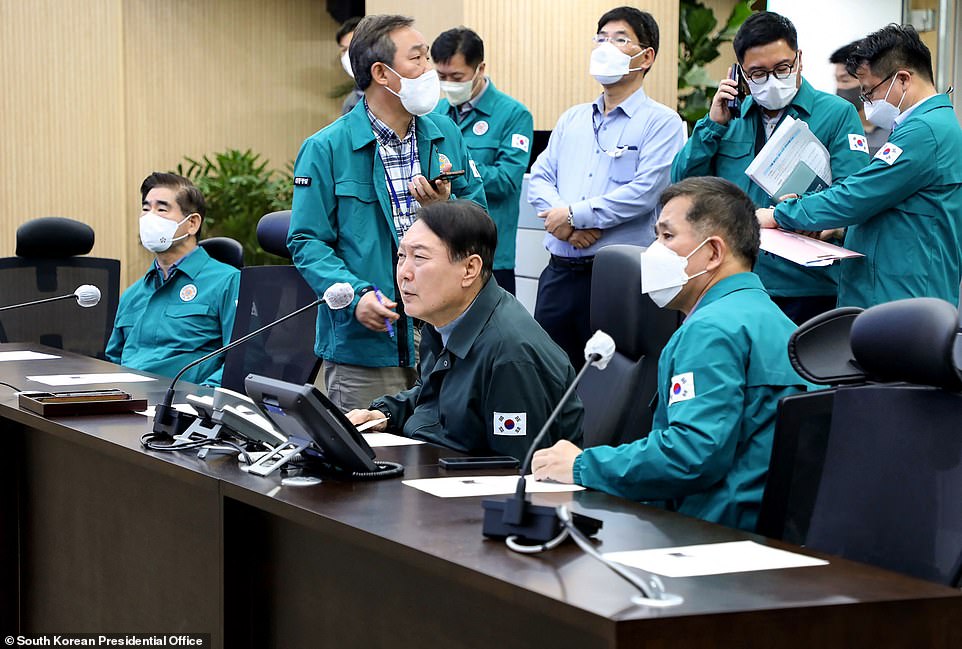 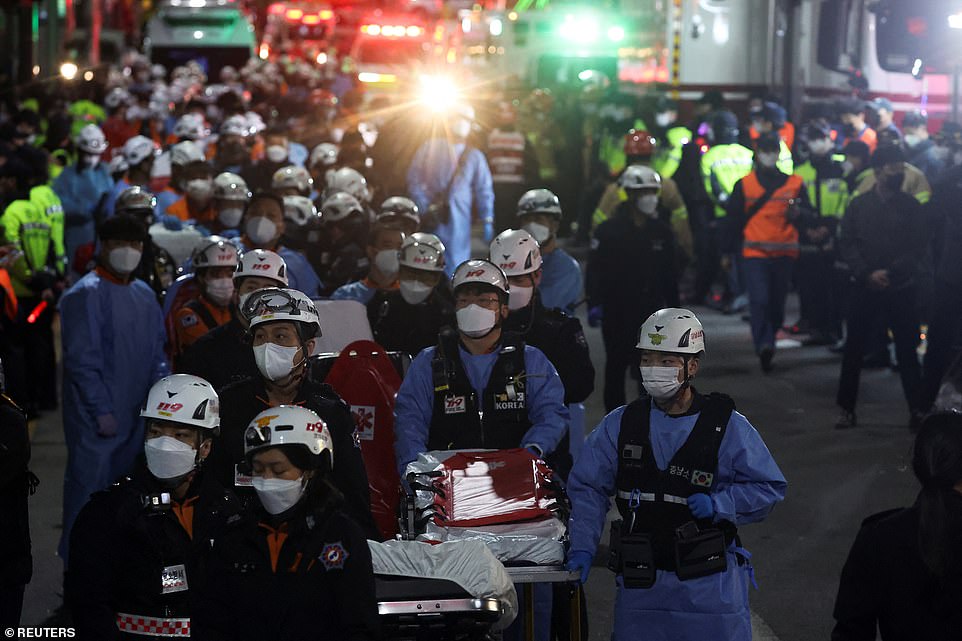 The scale of the emergency response in Seoul has seen emergency workers called from across the country, including 140 ambulances

‘They were laughing because they were too scared. Because to be in front of a thing like that is not easy. Not everyone knows how to process that.’

Messages of condolence have flooded into South Korea from around the world. This afternoon the Prince and Princess of Wales sent their ‘love and prayers’ to all those affected by the tragic Halloween stampeded.

Prince William and Princess Kate tweeted from their official account: ‘Catherine and I send all our love and prayers to the parents, families and loved ones of those tragically lost in Seoul yesterday evening. W & C.’

Their message follows Prime Minister Rishi Sunak who said his thoughts were with ‘those currently responding’ to ‘all South Koreans’ following the horrific news.

Battered stones of Jerusalem's Western Wall get the full treatment