It came after a pair of parted legs with red heels were attached to the gates of Festival Park in Govan, Glasgow, by artist Rakel McMahon.

The piece, entitled The Gate Of Assumption, sees the legs open along with the gates as visitors enter the park and was posted to the artist’s Instagram page last week – before causing a furious backlash.

Locals found the theme and location of the piece particularly insensitive following an alleged sexual assault against an 18-year-old girl in the park in February.

Glasgow City Council has now removed the piece after receiving scores of complaints on Twitter – insisting it never commissioned it in the first place. 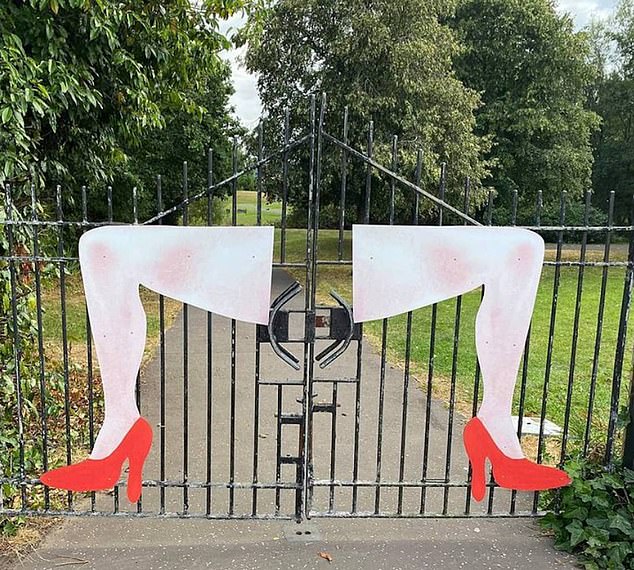 A pair of parted legs with red heels were attached to the gates of Festival Park in Govan, Glasgow, by artist Rakel McMahon (pictured)

One social media user said: ‘Glasgow City Council needs to remove this vile and offensive installation from a public garden.

‘Especially in the current climate of misogyny and violence against women.

‘I don’t care that the artist has a certificate in gender studies.’

Hundreds of shocked followers retweeted and commented on the post.

One wrote: ‘I’m not a woman but besides being offensive, who was the moron that approved this? What’s happening to Scotland?’

Another added ‘OMG how utterly vile.

‘Would they have that on the gates of Botanic Gardens? Or Rouken Glen Park? Naw! Instead they insult working class women in Govan.’

Glasgow City Council said Monday: ‘We know there has been a lot of concern regarding images that had been attached to gates Festival Park.

‘Council staff removed them this morning.

‘We cannot find any evidence the images were commissioned or in any way approved by the council, or any of its arm’s-length bodies.’

Ms McMahon first shared images of her artwork on Instagram earlier this month urging members of the public to visit. 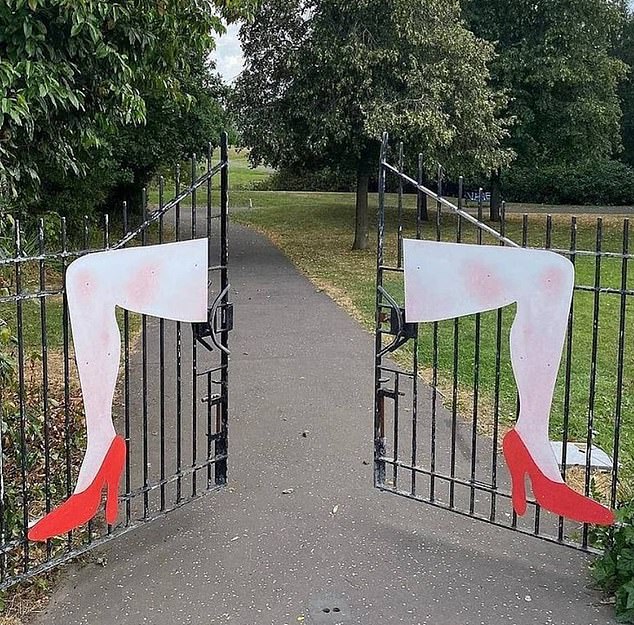 The piece, entitled The Gate Of Assumption, sees the legs open along with the gates as visitors enter the park and was posted to the artist’s Instagram page last week – before causing a furious backlash

She said: ‘If in Glasgow you might want to head down to @ltd-ink-corporation in Govan for the fantastic “Safari of sorts”

One user replied: ‘I’d be interested to understand more about this work. A teenager was raped in this park in February.

‘It’s not uncommon for women to be raped in parks; there were three reported in three different Glasgow parks in the space of a few weeks.

‘In that context, I’m not sure I can appreciate this work but I’d rather not make ‘assumptions’ could you tell us more?’

Rakel replied: ‘I am aware of the horrible attack in that park as I did research on the area especially looking at safety for women.

‘Who was the moron that approved this?’: Backlash on Twitter over the parted legs which appeared a week ago

‘As parks and green areas in a city are in general not safe places for women. Especially after dark. I’m currently working on a project that comments on sexual harassment in parks and public spaces.

‘As a feminist I was aware of that it might be interpreted as sexist but at the same time it is trying to point out that we should not assume anything, not by how people are dressed, short skirts or high heels.

‘The work is two legs in high heels, are they female? I feel the work touches upon the discourse on victim blaming in sexual harassment as well as giving the park area a feminine vibe that these green areas need.

‘As for now parks, in Iceland, Glasgow or any other city are not safe for everybody.’

An 18-year-old woman was allegedly attacked in the Festival Park area on February 19 this year.

A 30-year-old man was charged in connection with the attack but made no plea and was remanded in custody.