The Sri Lankan government will consider banning the burqa two years after ISIS fanatics killed 260 people in bombings of churches and hotels.

The minister for law and order, Sarath Weerasekara, said the full face covering worn by Muslim women was a national security risk.

‘In our early days Muslim women and girls never wore the burqa,’ he said. ‘It is a sign of religious extremism that came about recently. We are definitely going to ban it.’

The burqa was temporarily outlawed in the days after the 2019 Easter Sunday bombings of three churches and three luxury hotels in Colombo, which left eight Britons dead. 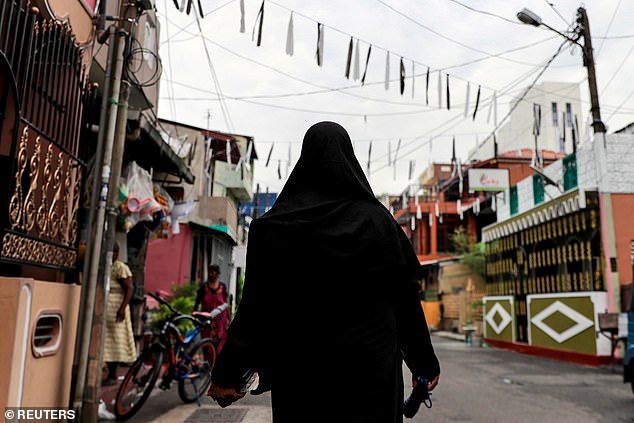 The minister for law and order, Sarath Weerasekara, said the full face covering worn by Muslim women was a ‘national security’ risk (pictured: a woman wearing a hijab walks through a street near St Anthony’s Shrine in the days after the attack) 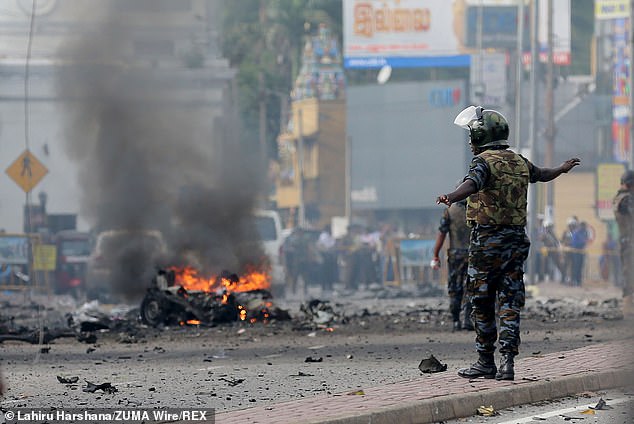 Military arrive after explosions went off near the Roman Catholic church, the Shrine of St. Anthony, in Colombo on Easter Sunday 2019

Bombs were detonated in rapid succession at three churches in Colombo on Easter Sunday, one of the holiest days in Christianity.

The most deadly blasts were at the two Roman Catholic churches, the Shrine of St Anthony and St Sebastian’s, where 171 worshippers were killed.

Three five-star hotels on the beachfront were attacked around the same time: the Shangri-La Hotel, the Cinnamon Grand Hotel and The Kingsbury.

The attacks killed more that 260 people, including eight British tourists and the three children of the Danish billionaire owner of ASOS, Anders Holch Povlsen.

At least 45 children, including nine foreigners, were killed in the atrocity.

The attacks were blamed on two local Islamic extremist groups that had pledged allegiance to Islamic State.

The jihadist perpetrators of the attack had pledged allegiance to ISIS and Islamic State claimed responsibility in the aftermath.

Later that year, Gotabaya Rajapaksa, best known for crushing a decades-long insurgency in the north of the country as defence secretary, was elected president after promising a crackdown on extremism.

Rajapaksa is accused of widespread rights abuses during the war, charges he denies.

Weerasekera announced on Friday government plans to ban more than a thousand madrassa Islamic schools that he said were flouting national education policy.

‘Nobody can open a school and teach whatever you want to the children,’ he said.

A Pakistani and a UN expert have both expressed concerns over the burqa ban, with Islamabad’s ambassador Saad Ambassador Saad Khattak tweeting a ban would only injure the feelings of Muslims.

The United Nations’ special rapporteur on freedom of religion or belief, Ahmed Shaheed, tweeted that a ban was incompatible with international law and the rights of free religious expression.

A government spokesman today said that the cabinet’s decision on burqas had not yet been finalised.

‘It will be done in consultation. So, it requires time,’ Keheliya Rambukwella said without elaborating, at the weekly media briefing.

Ethnic minority Tamils, who are mainly Hindus, comprise about 15 per cent of the population.

The government’s moves on burqas and schools follow an order last year mandating the cremation of COVID-19 victims – against the wishes of Muslims, who bury their dead.

This ban was lifted earlier this year after criticism from the United States and international rights groups.