Health Minister Brad Hazzard is standing firm behind plans to require churchgoers to show proof of vaccination when NSW reopens, despite religious leaders pushing for an exemption on the grounds no one should be turned away from church.

“Churches have a responsibility to minister to all, regardless of immunisation status, so we will be discussing with government how we can fulfil that ministry commitment in future stages of the recovery,” Archbishop Raffel told The Sun-Herald. “We want everybody to be safe at church, but we also want to make sure we minister to everybody.” 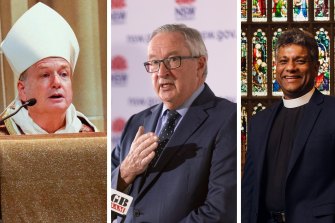 Sydney archbishops have challenged Health Minister Brad Hazzard over the government’s plans to make vaccination a requirement to go to church.Credit:Composite

The Catholic Archbishop of Sydney Anthony Fisher said he and other religious leaders had told the government worship was “an essential service, not mere recreation” for many people.

“We explained that all our faiths are inclined to allow all comers to worship, that many pastors and faithful would be uneasy with restricting worship to the fully vaccinated, and that doing so could prove very divisive,” he said.

The road map announced last week allows places of worship to reopen to vaccinated people with capacity limited to one person per four square metre rule, once 70 per cent of NSW adults are fully vaccinated, estimated to be around the middle of October. Singing will not be allowed.

The government has not clarified what will happen at 80 per cent double dose vaccination.

Last week before the road map was announced, Phil Colgan, minister at St George North Anglican Church, told The Pastor’s Heart podcast he could not imagine a scenario in which he would turn away parishioners who weren’t vaccinated.

“Even if it is consistent and churches are treated the same as cinemas … I still question whether the government has the right to impose on churches something we don’t accept,” he said.

“I think it’s really important to note that all of our acceptance of government limitations to date I consider to have been voluntary, that the government doesn’t have the right to forbid people meeting as Christians, and we have chosen to accept and comply – rightly in my view.

“But there might come a time, like with a vaccine passport for me, where I would say ‘the government requires that but we are now going to stand up and say no’, even though it is consistent with what they’re requiring for cinemas and so forth.

“I can’t ever see a time when I would deny someone access to fellowship on the grounds of their vaccination status.”

Mr Hazzard told The Sun-Herald the government was still working on the road map as vaccination rates climbed towards 70 per cent, but at this stage the vaccination mandate would remain.

“If anybody goes to church unvaccinated – unless they have medical evidence of being excused from vaccination – then the person will be committing breach of the public health orders,” he said.

“Hopefully attendees will be respectful of other congregants and understand if they attend when unvaccinated they put themselves and others at risk. As vaccination goes up to well and truly beyond 70 per cent of the population, the situation will be reviewed by the public health team.”

At Saturday’s press conference Mr Hazzard said he was in regular contact with Archbishop Fisher and other religious leaders about their concerns. “I get lobbied by everybody,” he said. “Anthony texts me regularly.”

Stay across the most crucial developments related to the pandemic with the Coronavirus Update. Sign up to receive the weekly newsletter.

British tourist, 29, posts video as he struggles to breathe