The state pension and benefits could both rise in line with inflation despite the desperate scramble to fill the £60billion hole in the government’s finances.

Details sent to the Treasury watchdog ahead of Chancellor Jeremy Hunt’s Autumn Statement are said to factor in increases to match prices.

The move could cost £11billion a year and necessitate even deeper cuts to unprotected departments – but would avoid the Tories breaking more manifesto promises.

It is also expected to be offset by a huge ‘stealth’ raid on taxes, with thresholds frozen to drag millions of people deeper into the system.

In the latest signal, there is speculation the level at which inheritance tax becomes due will be held to raise around half a billion pounds a year.

A senior Government source confirmed that the moves are being considered for the fiscal package on November 17 but stressed no final decisions have been taken.

The government’s books are looking increasingly unsteady after the Bank of England’s grim prediction last week of a long-lasting recession. 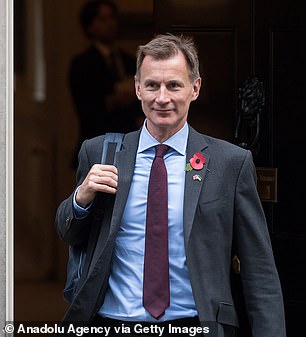 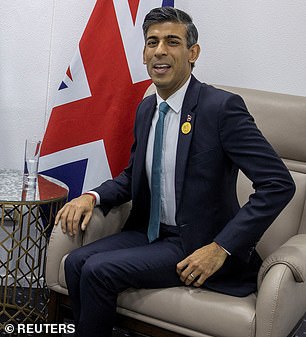 Yesterday Business Secretary Grant Shapps repeatedly refused to guarantee that the pension triple lock would be restored, despite a personal pledge by Mr Sunak in May when he was still Chancellor.

There has also been no confirmation that benefits will be uprated in line with inflation from April.

However, according to The Times material provided to the Office for Budget Responsibility includes the assumption that both will rise to take account of prices, rather than wages as had been suggested.

Mr Sunak and Mr Hunt are hoping to make spending bear the burden of the tightening, with departments forced to find £35billion of savings while £25billion will be accounted for with tax rises.

The threshold for inheritance tax is also set to be frozen again, despite big increases in house prices in recent years. The Financial Times said that could raise around half a billion pounds a year, or more if inflation falls slower than hoped. 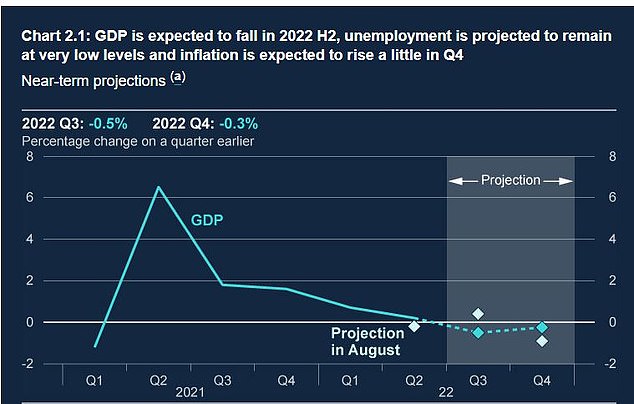 However, a controversial plan to cut pension tax relief for higher earners has been shelved, partly because of its complexity and partly due to fears it would wreck the retirement dreams of millions.

Breaking the manifesto commitments on pensions or the ‘tax lock’ – which rules out hikes to the main income tax, NI and VAT rates – and would leave the PM facing a big Conservative backlash.

During tense talks in Downing Street at the weekend, Rishi Sunak and Mr Hunt were told the hole in the public finances is now estimated at up to £60billion.

A Whitehall source said officials were struggling to devise a package that will allow the Government to raise pensions and benefits in line with inflation while also keeping the pledge not to raise the main rates of income tax, VAT or national insurance.

The source added: ‘The message from officials was that you may want to keep the triple lock, raise benefits in line with inflation and maintain the headline tax rates where they are, but something has got to give. They are looking at a gap of £50-£60billion. The choices are pretty grim.’

Senior Conservatives warned yesterday that abandoning the triple lock would be seen by pensioners as a betrayal.

Ex-minister Sir John Hayes said the point of the lock was that it would be ‘secure for good’ not ‘broken at will’. He added: ‘We gave older people the guarantee that their incomes wouldn’t fall behind.

‘That’s a landmark thing and something to be proud of – we must retain it.’

The triple lock, introduced in 2010, guarantees that the state pension will rise in line with either inflation, earnings or 2.5 per cent, whichever is the highest.

The 2019 Tory manifesto pledged to keep the protection in place for the duration of this Parliament.

Mr Sunak suspended it this year because of a freak rise in average wages linked to the end of lockdown, meaning pensioners received an increase of just 3.1 per cent.

Under one option considered by the Treasury, pensions would rise in line with average earnings rather than inflation next year, meaning an increase of 5.5 per cent, instead of 10 per cent. The Institute for Fiscal Studies said that would save the Treasury around £4.5billion a year.

Billions more could be saved if benefit payments also rise in line with earnings, but a string of Tories have spoken out against the idea, including Work and Pensions Secretary Mel Stride.

However, any move to raise taxes will also trigger protests on the Conservative benches, with some already warning that the Budget risks sparking a deeper recession.