Parts of western Scotland are currently being battered by heavy rain – but a second weather warning has also alerted people to another wind warning which comes into play in a matter of hours. The Met Office’s first yellow warning for rain will cease after 10am today, but a second, and more widespread, ‘danger to life’ warning will be activated from midnight – this time covering most of Scotland and large swathes of the north west. ITV national weather forecaster and presenter, Alex Beresford, spoke about the ongoing movement of the jet stream behind the current bout of unsettled conditions.

Speaking on ITV weather after the 6pm news yesterday, he said: “We’ve had one area of low pressure but a second one comes in on Wednesday, this is going to be fairly deep, it’s coming along with a fairly strong jet stream as well .

“The larger parts will be tightly packed together, so, these winds will  certainly pack a punch.

“We have this wind warning which has been issued for much of Wednesday which takes into consideration a large part of the British isles.

“We could see gusts of up to 65mph inland out towards the coast, but maybe as much as 80mph in some exposed areas, so that will cause some of the impact.” 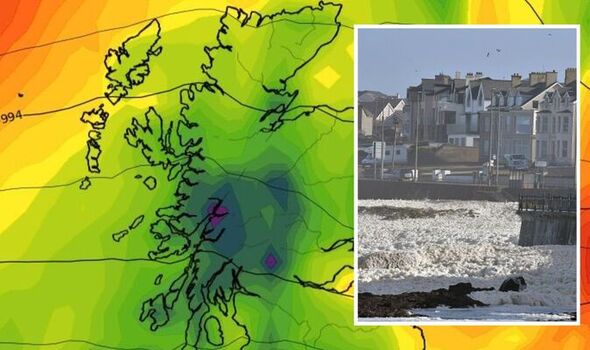 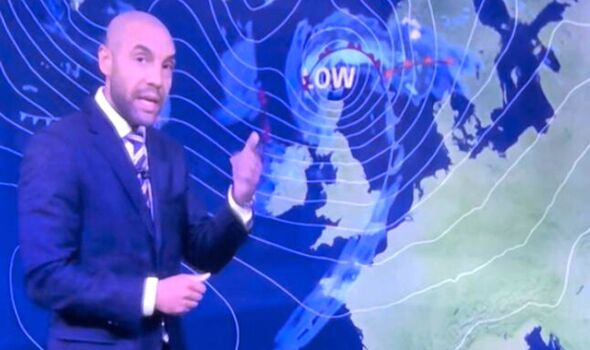 The Met Office has labelled the second warning as having a potential ‘danger to life’, and this is because of flying debris which could come off the coastline, and onto roads and residential areas.

There may also be damage to buildings, with roof tiles being blown off, and public transport is set to be adversely affected. People should also prepare for any power outages and skewed mobile phone network coverage, the leading forecaster added.

Its statement said: “There is a chance of a deep low pressure system bringing gusts of 70 to 80 mph to northern parts of the UK on Wednesday.

“Should this develop disruption would be expected. However, the most likely scenario is for gusts of 55 to 65 mph within parts of the warning area, most likely the northern Irish Sea and parts of eastern Scotland, bringing some more localised impacts. In addition, heavy rain may prove an additional hazard across northwestern areas.” 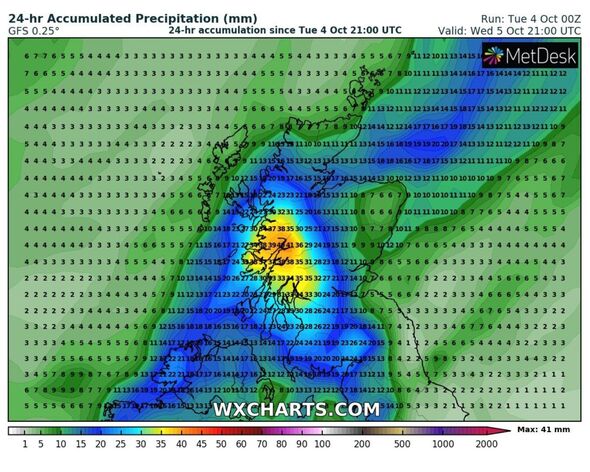 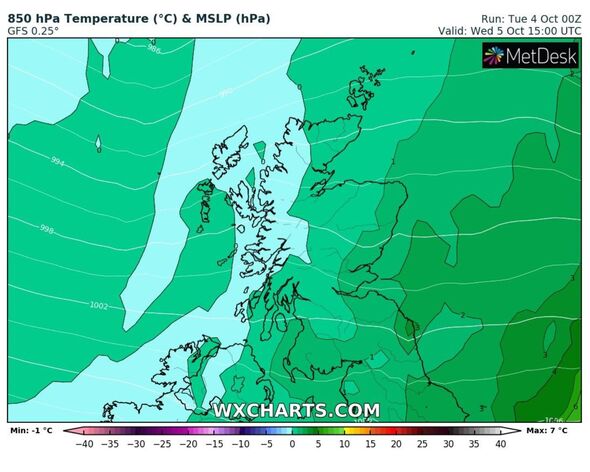 The weather front will be due to settle towards the latter end of the week in north western England and Scotland, with temperatures hovering around the 11C to 13C mark at best.

Parts of Scotland can expect some light rain, but there are no other weather warnings in place as yet. Looking ahead to the rest of the month, the autumnal weather will remain changeable, but with temperatures not suffering too badly just yet.

The long range forecast from the Met Office adds: “This period is likely to be characterised by unsettled weather with sunny spells and showers or longer periods of rain for most areas. The heaviest and most frequent rain is expected in the west and northwest, while southern areas may remain drier on average.

“Confidence remains low, with the possibility of more settled conditions building across the UK at some point.”

Breezy conditions are expected throughout, with coastal gales possible, and the strongest winds are likely to be experienced in the north.

“Temperatures will generally be close to or slight above normal throughout the period. Early in the period, there is the possibility for cooler nights, bringing the chance of mist or fog in places.”

Before November hits, the Met also says that temperatures will actually rise above average for the time of year for many.

Factbox: Latest on coronavirus spreading in China and beyond