One of the two Chinese athletes who carried the Olympic torch to its climactic point in opening the Beijing Winter Games on Friday, Dinigeer Yilamujiang, is not only a photogenic 20-year-old cross-country skier. She also happens to be a Uighur – the only one among China’s 176 competitors.

The Beijing Winter Olympics has been branded the “genocide games” to protest against the Chinese government’s continuing repression of the Uighur ethnic minority in the north-western province of Xinjiang. 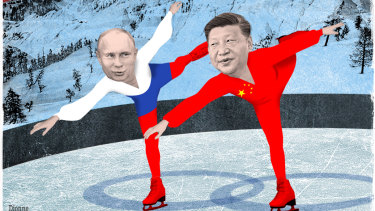 With about one million Uighurs forcibly detained at any one time in high-walled incarceration centres, ten of the world’s democratic states – including Australia – have declared diplomatic boycotts of the Games. Another half-dozen – including New Zealand – declined to send any official representatives under the pretext of COVID-19 concerns.

So, the appearance of a beaming Ms Yilamujiang lighting the Olympic cauldron in the Birds Nest arena was a striking gesture. How could this be a genocidal regime when it’s celebrating a star Uighur athlete for all the world to see?

“It’s a huge honour for me,” she told the Chinese Communist Party-owned Xinhua news outlet.

“China has done everything it can for me, and what is left for me to do now is to train hard and bring glory to the country,” she told another party-owned outlet, the Xinjiang Daily. 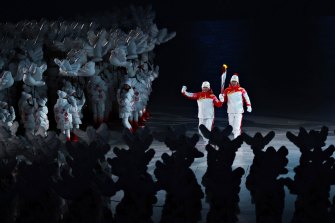 The athlete who shared the honour with her is from the Han ethnic majority. It was apparently a symbol of unity. China calls the accusation of genocide “the lie of the century”.

The Chinese government’s record of truth telling about its Uighur policy is not strong. When the incarceration centres were first reported, for instance, the Beijing government flatly denied they existed.

An expert researcher on the Uighur situation, Darren Byler at Simon Fraser University, said of the choice of Ms Yilamujiang: “I think it should be read as China saying we are not backing away from our stance on what we’re doing in Xinjiang, and we don’t really care what the world thinks about it,” he told the AP news service. 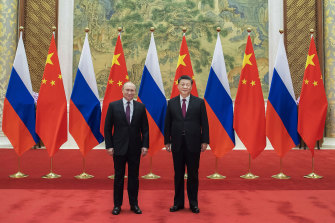 Ms Yilamujiang competed in her race on Saturday and finished 43rd. “Afterward, Ms. Yilamujiang and the three other Chinese athletes competing in the event slipped away, leaving more than a dozen Chinese and foreign journalists waiting for more than an hour in frigid temperatures,” reported the Wall Street Journal. This was in spite of the International Olympic Committee rule that competitors pass through a “mixed zone” that allows reporters access to them.

History, as Mark Twain said, might not repeat, but it rhymes. There was a raging debate about whether to boycott the 1936 Summer Olympics in Berlin. On that occasion, another authoritarian regime featured another female athlete from a persecuted minority to deflect claims of racial persecution. Helene Mayer, a fencer, was the only Jew in the German team.

The Nazi regime agreed to allow a single Jew onto the team “only under threat of a cancellation of the Games” and pressure from the IOC, according to the Encyclopedia Britannica. She won a silver medal and struck the Nazi salute on the podium in a stadium draped in Nazi banners. She afterwards left for the US, where she spent the rest of her days.

Months before the Beijing Winter Olympics, the president of Britain’s Jewish Board of Deputies, Marie van der Zyl, wrote to China’s ambassador to London in 2020 to demand that the repression of the Uighurs end and the camps be thrown open. 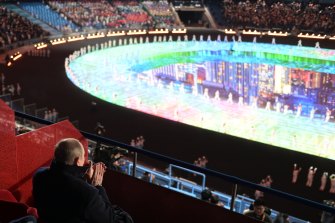 The joint statement released by China and Russia came out just the opening ceremony began, with both Putin and Xi in the stands. Credit:Sputnik

“Nobody can fail to notice the similarities between what is alleged to be happening in the People’s Republic of China today and what happened in Nazi Germany,” she wrote. “People being forcibly loaded on to trains, beards of religious men being trimmed, women being sterilised and the grim spectre of concentration camps.”

One of the questions commonly asked by today’s students of Nazi Germany is how such atrocities could have been allowed by the international community. Today, it’s not so hard to see how.

Beijing says that 32 heads of government and royals from around the world are attending the Beijing Olympics this week. The UN, the World Health Organisation and the IOC all have sent their top officials. The big corporate sponsors of the Olympics have chosen to stay silent when asked their opinions of the Uighur situation.

And on the very day that the Beijing Olympics opened, Russia’s Vladimir Putin shook hands with China’s Xi Jinping to seal a new pact, a “no limits” agreement: “Friendship between the two States has no limits, there are no ‘forbidden’ areas of cooperation,” they said in a wide-ranging 5000 word declaration.

They stated support for some of each other’s priority global aims. Xi, who has declared the Russian president to be his “best friend”, explicitly supported Putin’s demand that NATO not be expanded. Putin supported Xi’s claims to Taiwan. Both condemned the AUKUS agreement. And so on.

“It’s a brazen show of confidence that they can do the agenda setting, that they can put their values and interests at the centre of international affairs,” says the head of the ANU National Security College, Rory Medcalf.

Medcalf said it signalled that there was “now a full-throated struggle over the future of the world order. They are sending the signal that those who assume that [Sino-Russian cooperation] is a hollow partnership, ‘no, you guys are wrong, this is a quasi-alliance’“.

This is a powerful rebuff to the countries that boycotted the Games, to the countries denouncing Russia’s intimidation of Ukraine. Far from being chastened, this authoritarian quasi-alliance encourages the Sino-Russian priorities of repression at home and territorial ambition abroad.

Medcalf describes their joint statement as “a historically significant document in the way it confirms the gravity of the challenge.” How significant?

If Moscow and Beijing continue to tighten their embrace, history might one day judge it to be a step towards a vision as important as the 1940 Tripartite Pact. That alliance between Germany, Italy and Japan set out the “prime purpose to establish and maintain a new order of things” and carve the world into spheres of influence.

Xi and Putin are not there yet. The Tripartite Pact, for instance, promises signatories mutual military support to each other if attacked, and that’s beyond the limits of the “no limits” agreement. But that is the direction in which they’re travelling.

Jane Clifton: Government leaving every other workplace to fend for itself

Footage of Brisbane’s RAAF airshow rehearsal has spooked US viewers