Yangon: Myanmar’s ruling National League for Democracy party said it has won enough seats in Parliament to constitute an absolute majority and retain power. It made the claim even though the state Union Election Commission has not yet released full results from Sunday’s election.

“I can now confirm that we’re now securing more than 322 seats,” said Monywa Aung Shin, a spokesperson for the NLD information committee. There are 642 seats in Parliament.

“We were aiming to secure 377 seats in total. But it would be likely more than that,” Monywa Aung Shin said. 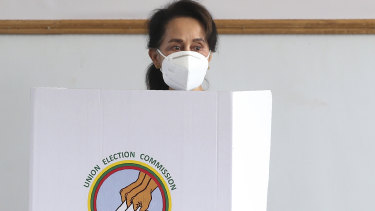 There were no reliable official figures available on voter turnout, and the commission earlier said that it might take as long as a week to release full results. By 8pm Monday, Yangon time, it had announced the names of just nine candidates who had won seats in the national Parliament, all belonging to the NLD.

Yway Mal, an independent vote counting service, said the NLD had secured 64 seats and its main opponent, the Union Solidarity and Development Party, had won seven. 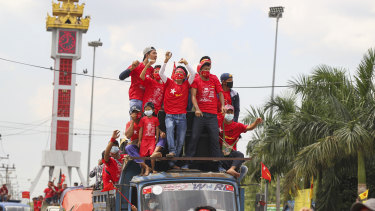 Supporters of Myanmar Leader Aung San Suu Kyi’s NLD party cheer from a truck on the final day of campaigning for elections.Credit:AP

The People’s Alliance for Credible Elections — PACE — one of the biggest poll watch organisations in Myanmar, said that in almost one-third of the polling stations it monitored, a few people were unable to cast ballots because their names were not on the voting lists.

But the group described election day voting as peaceful and said no major incidents were recorded.

A victory by the NLD had been widely expected, though it had been speculated that its deterioration of relations with ethnic minority-based parties, with whom it had cooperated in the last election in 2015, might cut its totals.

Much of the NLD’s appeal is based on the popularity of its leader, Aung San Suu Kyi, who became the head of government with the title of state counsellor after the 2015 polls.

Her administration’s record has been mixed at best, with economic growth falling short of expectations and no end to the decades-old armed strife with ethnic minorities seeking greater autonomy.

But among her countrymen, she has managed to retain the appeal she built up during decades of fighting for democracy against the military dictatorships that preceded her.

Outside Myanmar, her reputation took a dive in response to her failure to defend the human rights of the country’s Muslim Rohingya minority. Her foreign supporters were shocked that she did nothing about the brutal 2017 counter-insurgency campaign of Myanmar’s army that forced about 740,000 Rohingya to flee across the border to neighbouring Bangladesh.

But the issue was a matter of little concern to most voters, due to deep-seated prejudice against the Rohingya, whom many consider to be illegal immigrants from south Asia despite their families having lived in Myanmar for generations. Few have citizenship or civil rights, including the right to vote.

Suu Kyi in the past few months has projected a strong image of leadership in state media and in livestreamed social media appearances as Myanmar has battled a surge in coronavirus infections.

At the same time, much traditional campaigning, such as mass rallies, was curbed by restrictions imposed to control the spread of the virus.

More than 90 parties contested the election and 37 million people were eligible to cast ballots, including 5 million first-time voters, but many Rohingya were excluded.

The country's election commission, criticised for a lack of independence, last month cancelled voting in parts of the country where ethnic minority populations have shunned the NLD – disenfranchising 1.6 million people and inflaming tensions in places long marred by violence.

Suu Kyi’s NLD romped to a landslide victory in 2015, giving it an absolute majority and ending more than five decades of military-directed rule.

Her government drew criticism from rights groups over how it conducted the election, with a focus on the disenfranchisement of the Rohingya minority.

“A core principle of elections under international law is universal and equal suffrage and that is not what took place yesterday,” Ismail Wolff, regional director of Fortify Rights, said in a statement released Monday. “The international community must unequivocally condemn the disenfranchisement of Rohingya and other ethnic nationalities or risk paving the path for future violations.”

“Other concerns include the government’s continued crackdown on the rights to freedom of expression and peaceful assembly, including the arbitrary arrest and detention of civil society actors and activists,” the group said.

Young Thais have nothing more to lose, says protest leader

Morning Briefing: Top stories from The Straits Times on Nov 25
We and our partners use cookies on this site to improve our service, perform analytics, personalize advertising, measure advertising performance, and remember website preferences.Ok