Gotland: Two Gripen fighter jets swoop in, unleashing a clatter of cannon fire at an imagined enemy battling its way inland from the beach.

As they pull away, armoured combat vehicles and battle tanks roar up to a ridge, and begin firing off shell after shell, before racing in for closer-range combat, backed by an infantry platoon armed with anti-tank mortar weapons. 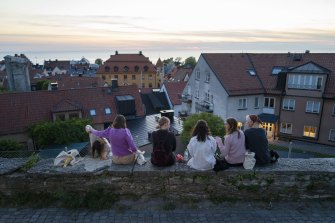 People sit along a street in the town of Visby in Gotland, Sweden. Credit:Getty Images

Until Sweden’s armed forces sent reinforcements to the strategic island of Gotland two weeks ago, this show of strength would have been impossible.

But with Russian troops massed on the border of Ukraine, the security situation in the Baltic Sea is now more tense than at any time since 1981, when Russian warships came close to entering Swedish territorial waters to rescue a stranded submarine.

At the same time, Russia’s demand that the US block Sweden and Finland from membership of NATO, has reawakened debate in Sweden over joining the Western alliance.

When Russia moved landing ships from its Arctic ports into the Baltic two weeks ago, Sweden reacted by dispatching tanks and combat vehicles to the island in a visible show of force.

Most of the tanks are from the Skaraborgs Regiment, north of Gothenburg.

Most of the combat vehicles have come from Boden, on the edge of Arctic Lapland. The mechanised mortar team are from the Life Guard Regiment in Stockholm. And the jets have flown all the way from Lulea at the northern tip of the Baltic.

“Now we have all these resources in place, it’s important for us to do this exercise to make sure that we have the capability intended,” says Major General, Jonas Wikman, the deputy commander of Sweden’s Joint Forces Command, who has come in from Stockholm.

As well as testing the ability of different regiments to work together, the exercise is designed to send a signal to Russia that this Baltic island is defended. 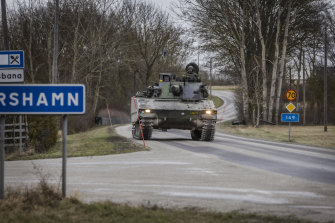 Members of Gotland’s Regiment patrol in a tank, on a road in Visby, nothern Gotland, Sweden.Credit:AP

“This is something that is visible. It’s important that everybody knows that we have the capability, and the will.”

Gotland, a diamond-shaped chunk of land between the coasts of Sweden and Latvia, has long been the key to the eastern Baltic.

In an underground fort at the island’s military museum, there is a display of British ship’s crockery dating back to the Crimean War, during which British and French navies used the northern harbour to shelter the fleet which blockaded the Baltic and starved Russia of imports.

The island was even occupied by Russian in 1808, albeit for only a few weeks, and Russian military plans obtained by Sweden during the Cold War made it clear it was a target.

Mike Winnerstig, head of security policy at the Swedish Defence Research Agency, says that when they war-game conflicts, the person playing Russia very often takes Gotland as a first move.

“If you really want to disturb transportation of troops and reinforcements to the Baltic states, having Gotland as a platform for your long-distance missiles and anti-aircraft artillery is a very good thing,” he says.

Until quite recently, Sweden made sure the island was defended.

At the height of the Cold War, Mr Winnerstig explains, 50,000 troops could be on the island in a matter of hours, backed up by 36 tanks.

The coastline and its harbours were defended by 25 fortified, fixed-artillery units and the entrances to the island’s harbours were filled with mines that could explode under incoming ships at the touch of a button.

Winnerstig said that by remaining outside the NATO alliance, the traditionally neutral Swedes miss out on a powerful block to any Russian attack on the island.

“If they want to do something before there is a full-scale war between NATO and Russia, as we’re not part of NATO, they could treat us as they treat Ukraine right now,” he said. 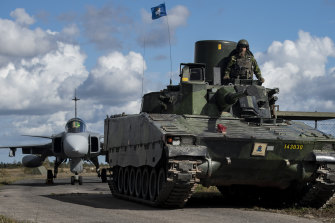 Sweden is stepping up its defence activities in the Baltic Sea due to “a deteriorating security situation” as Russia and NATO conduct military operations in the area.Credit:AP

“And NATO might say, ‘we will support you, of course, tell the Russians that they’re evil, that we won’t come to your help militarily’. Then Gotland would be up for grabs.”

Rutger Bandholtz, who commanded a battery of three 120mm Bofors cannons guarding Slite, the island’s eastern harbour, remembers the last time the island saw tensions similar to those of today.

A Soviet submarine ran aground in 1981 outside Sweden’s biggest naval base in Karlskrona, and Sweden feared the Soviet Union would send in warships to rescue it.

“That was the only time we had live ammunition in our cannons,” Bandholtz remembers, as he shows me one of the 120mm Bofors guns at the museum. “The prime minister said ‘keep the border’, and we did. They didn’t cross it, because they realised our guns were loaded.”

In 2005, the Gotland regiment was shut down, due, Winnerstig snorts, to “the end of the Cold War, the eternal peace and the end of history”.

The demilitarisation was reversed following Russia’s annexation of Crimea in 2014 but, four years after the Gotland Regiment was re-established, it still only numbers 300 personnel.

Lukas Rosengren, commander of one of the CV90 combat vehicles down from Boden, says that over the past fortnight his unit has been so busy patrolling, that there has been no time for socialising.

“There’s been a lot of communication through work and not so much outside, because we haven’t had any spare time yet,” he says.

With President Joe Biden continuing to warn of a “distinct possibility” Russia might invade Ukraine next month, he could be on alert for some time to come.

Coronavirus: Number of cases in Germany rises by nearly 3,000 to 13,957 overnight

Boy, 8, killed on waterslide after accidentally going down ‘dismantled’ tunnel