The future of Swiss neutrality? Swiss Air Force puts on a stunning display at the annual Axalp show – after taking unusual step in joining Europe’s sanctions against Russia

Switzerland’s Air Force put on an impressive display at an annual air show in the Alps, amid heightened military tensions in Europe.

The famously neutral country has an air force with around 20,000 active personnel, and yesterday showed off its aerial prowess near the summit of the Axalphorn mountain.

Tiger F5 airplanes, F-35s, Cougar helicopters and special forces put on a highly-skilled and synchronised performance for onlookers above a stunning background at the annual Axalp show.

The land-locked nation has traditionally avoided major European conflicts, such as WWI and WWII, however earlier this summer they angered Russia.

In August Russia said Switzerland could not act as go-between in talks with Ukraine because Moscow no longer considers it a neutral country.

Switzerland mirrored nearly all the sanctions that the European Union imposed on Russia over its military intervention in Ukraine. 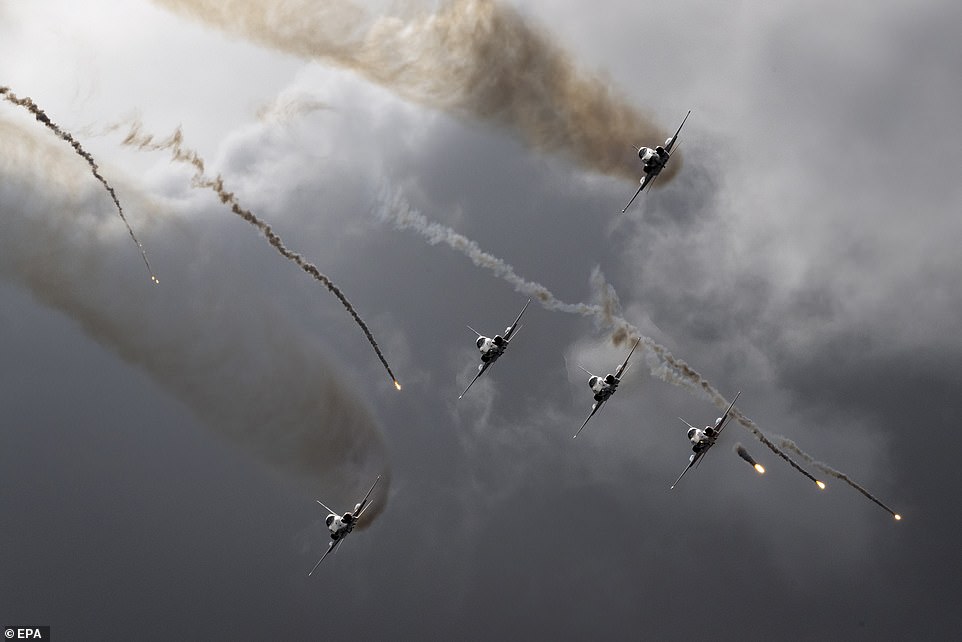 The Swiss Air Force put on a stunning display at an annual air show, after unusually joining Europe in sanctioning Russia over the summer 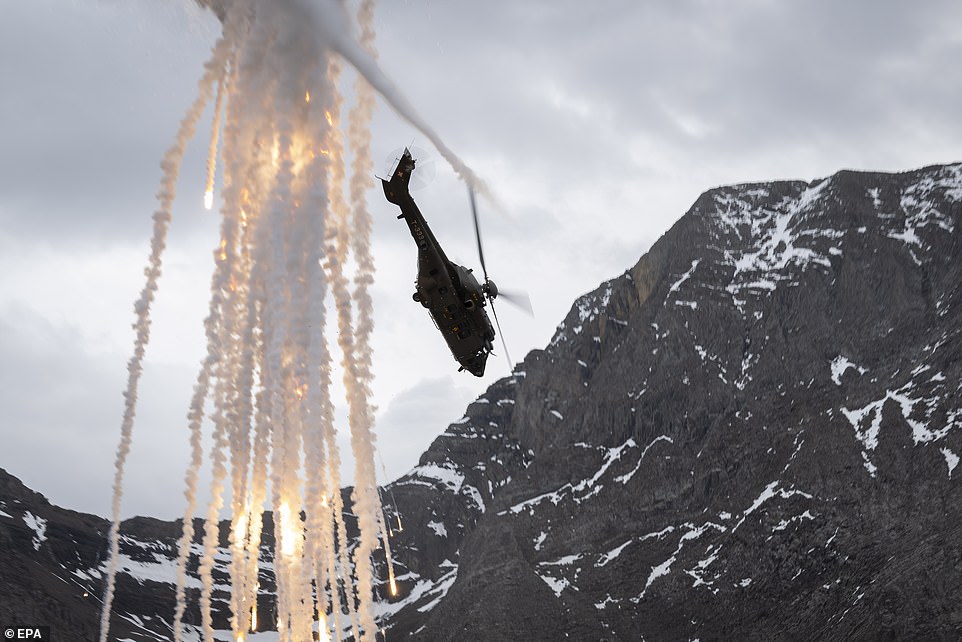 Russia said the neutral nation could not as a mediator for talks with Ukraine earlier this year, because of their sanctions 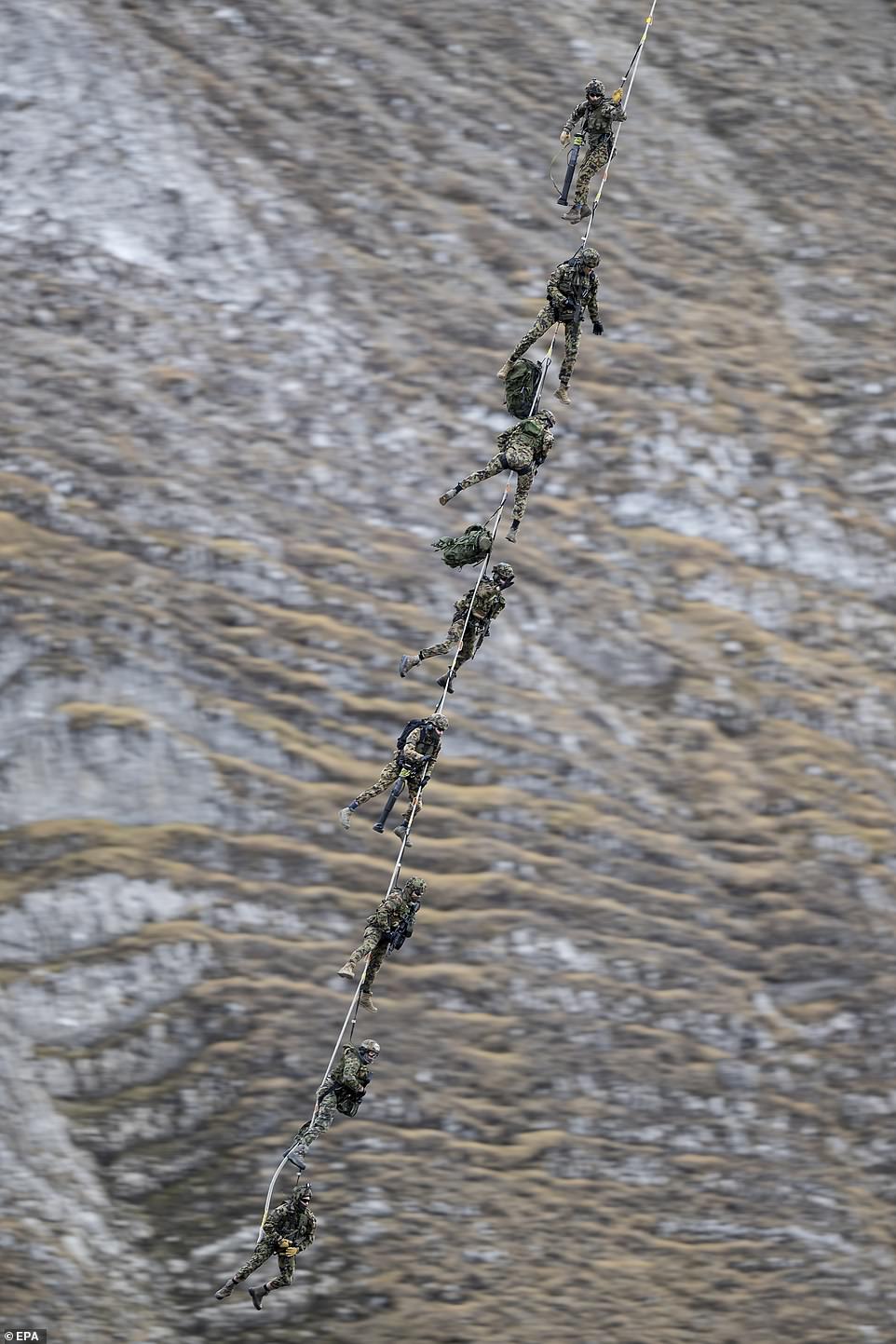 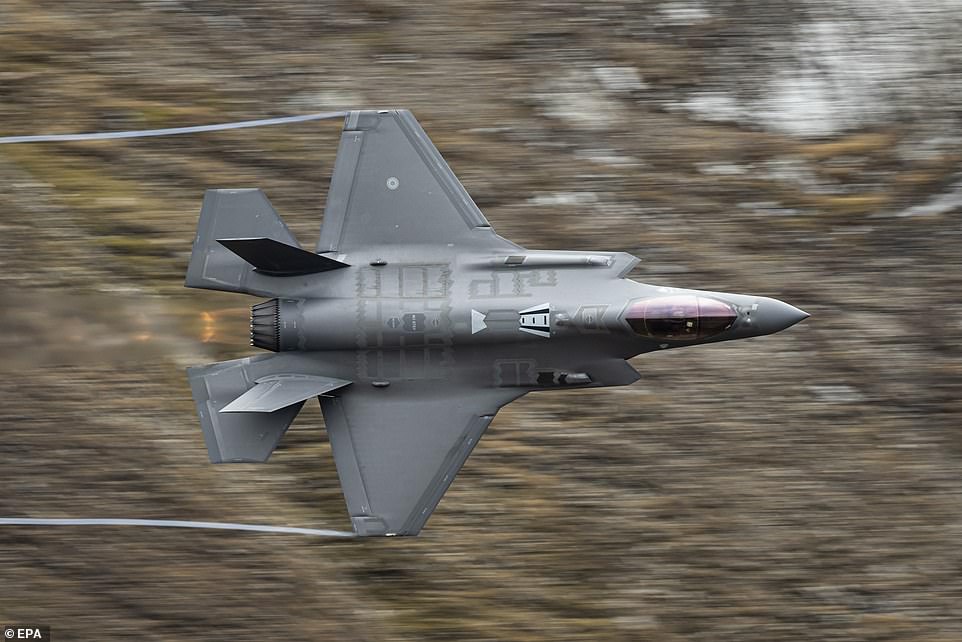 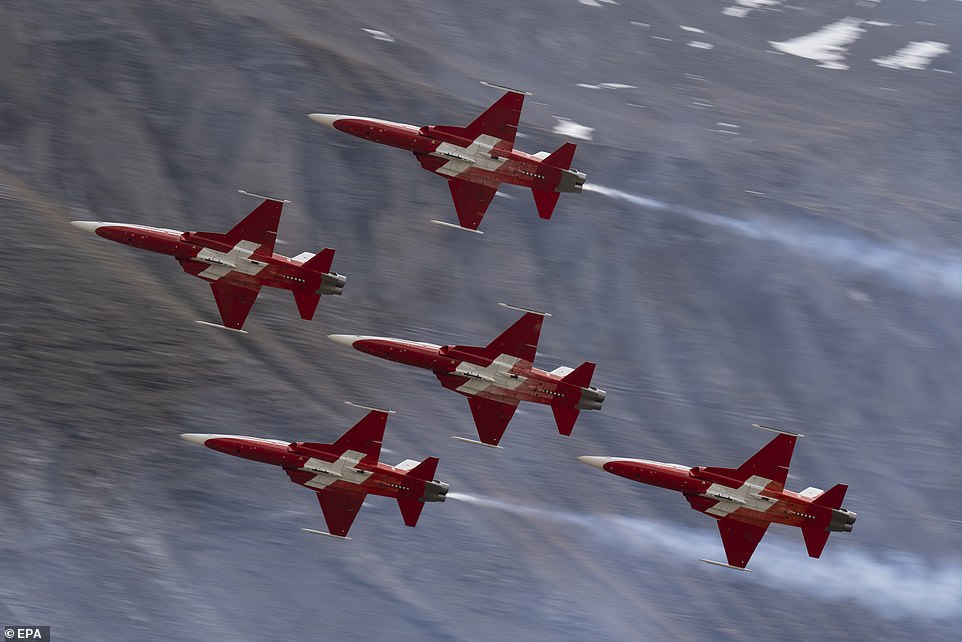 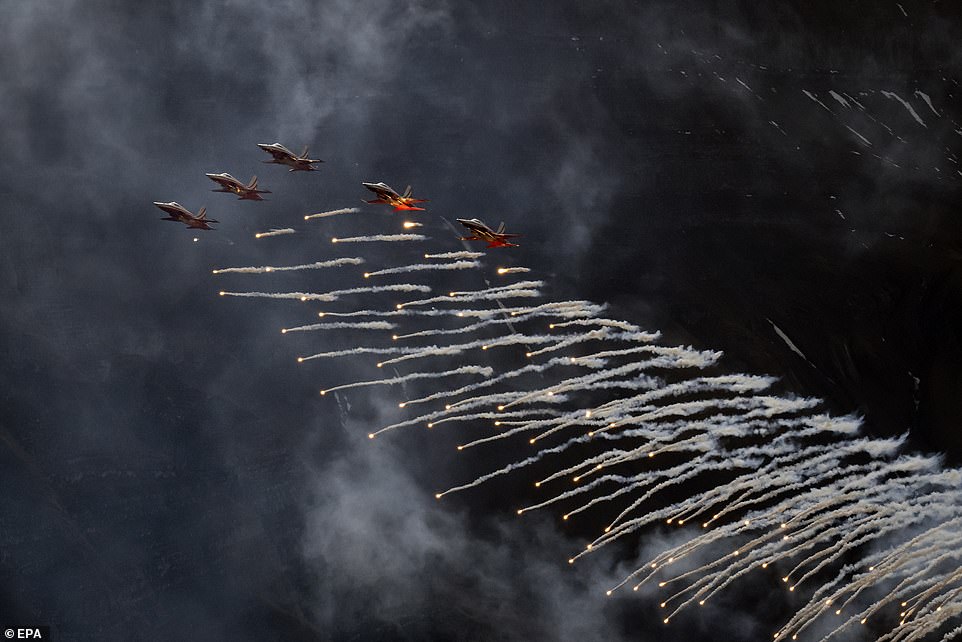 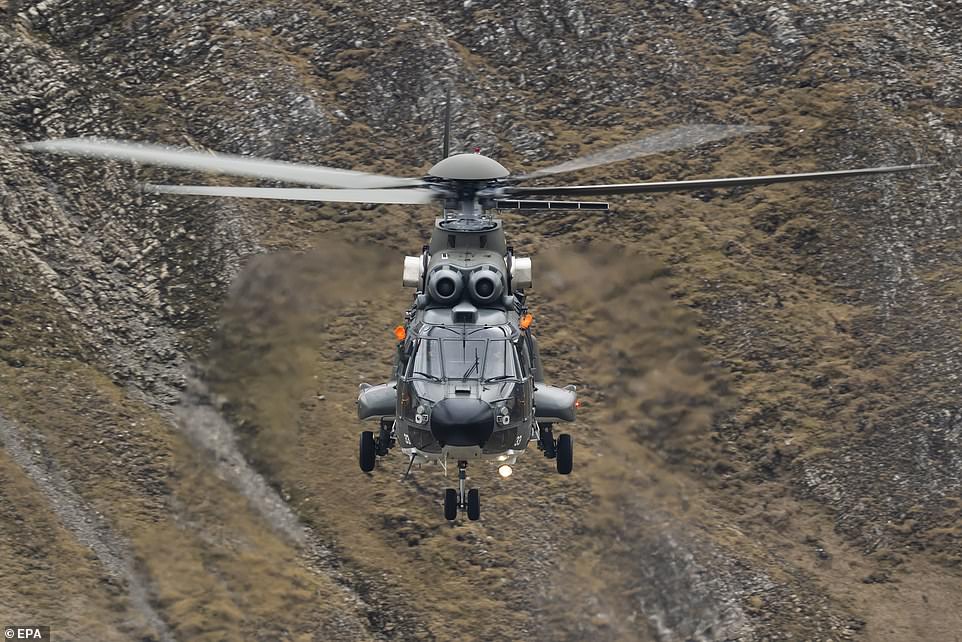 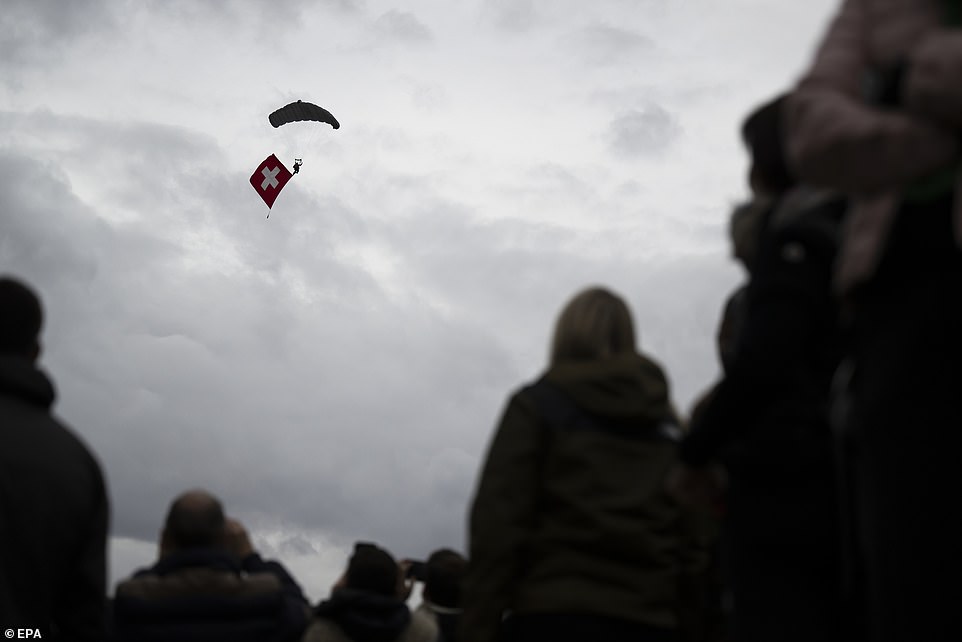 The origins of demonstration trace back to World War II, due to the threat of a possible Nazi invasion.

The two-day event from the air force shows off its ability in an alpine environment to a public audience.

Onlookers were able to see Tiger F5 airplanes from the Patrouille Suisse drop flares during the annual airshow.

A Cougar helicopter of the Swiss Air Force also dropped flares and showed its manoeuvrability, including an exercise where Special forces were evacuated.

The event is held at Ebenfluh firing range near the summit of the 7,614 feet (2,321m) high Axalphorn mountain. 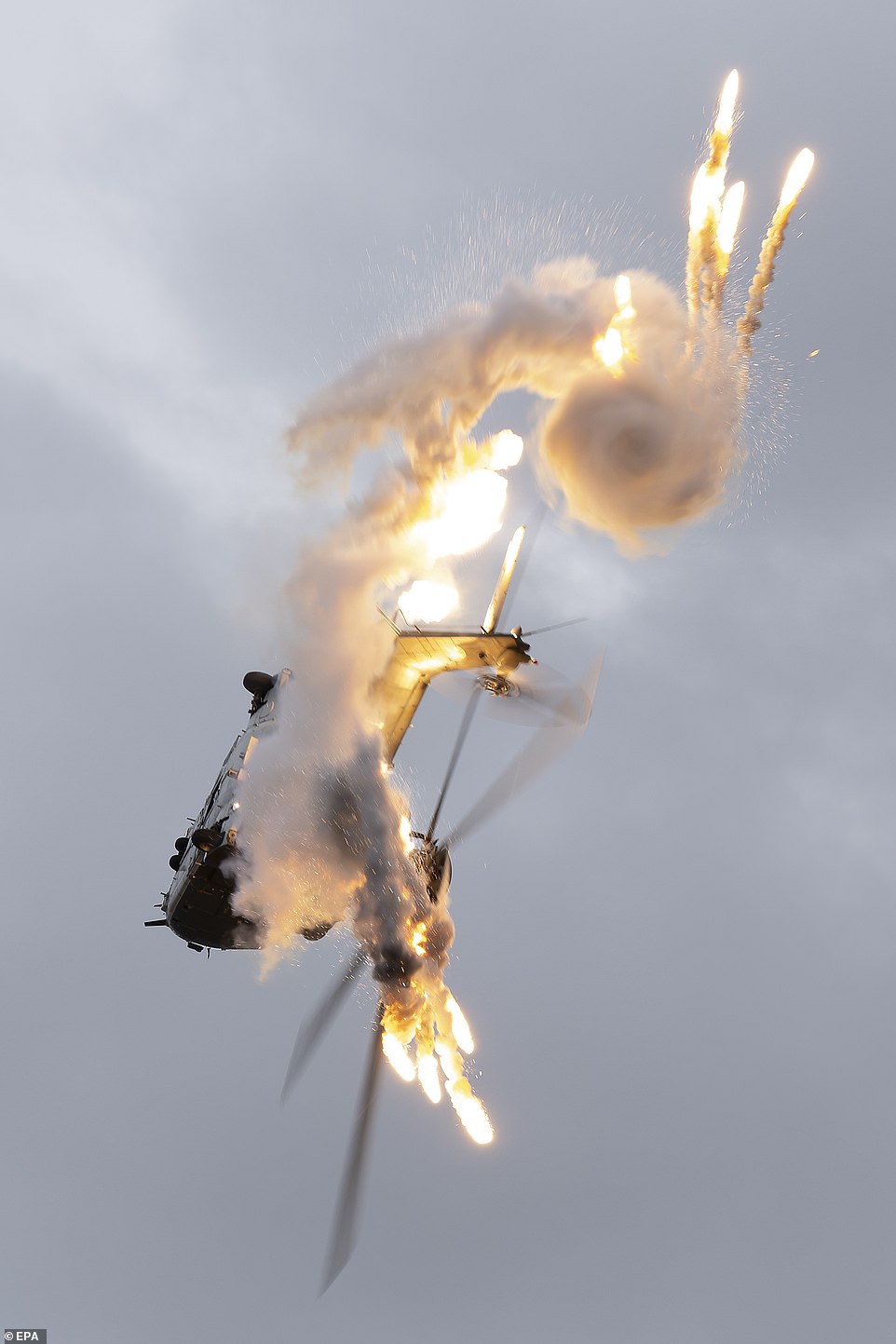 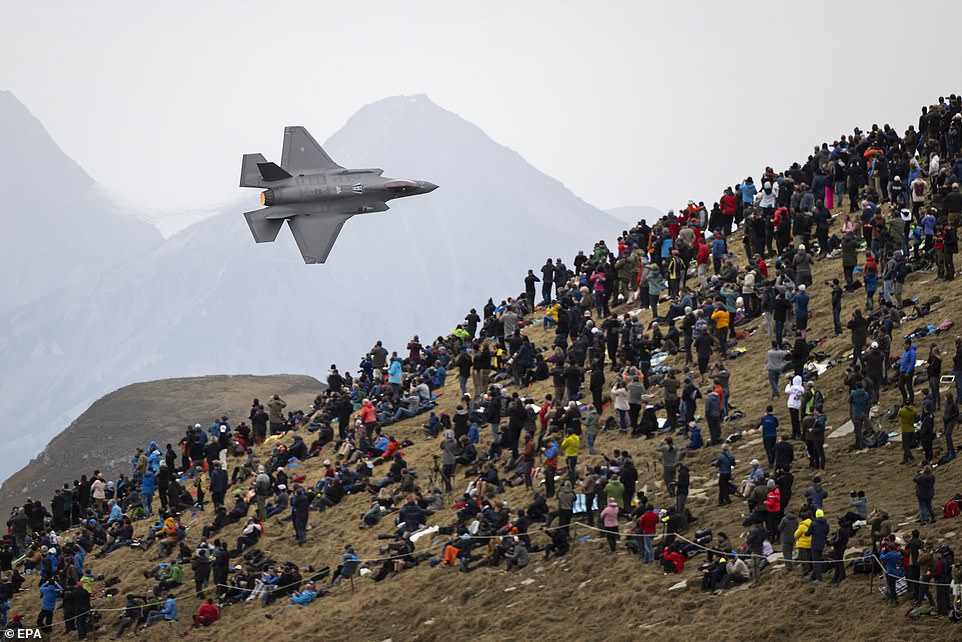 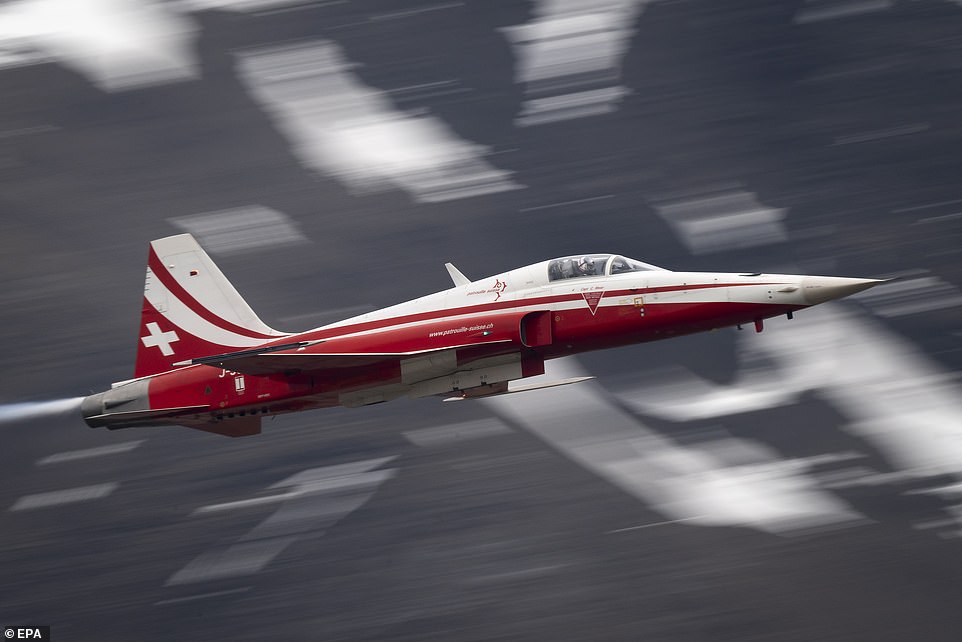 Record-high numbers of Swiss said in July that the government should increase defence spending, maintain a fully-equipped army, and build tighter relations with NATO 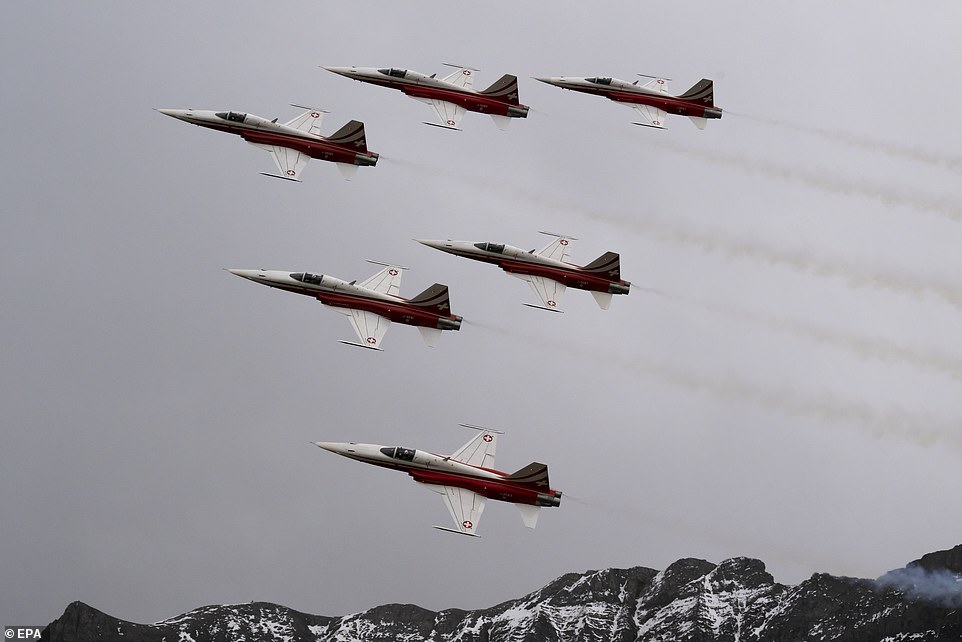 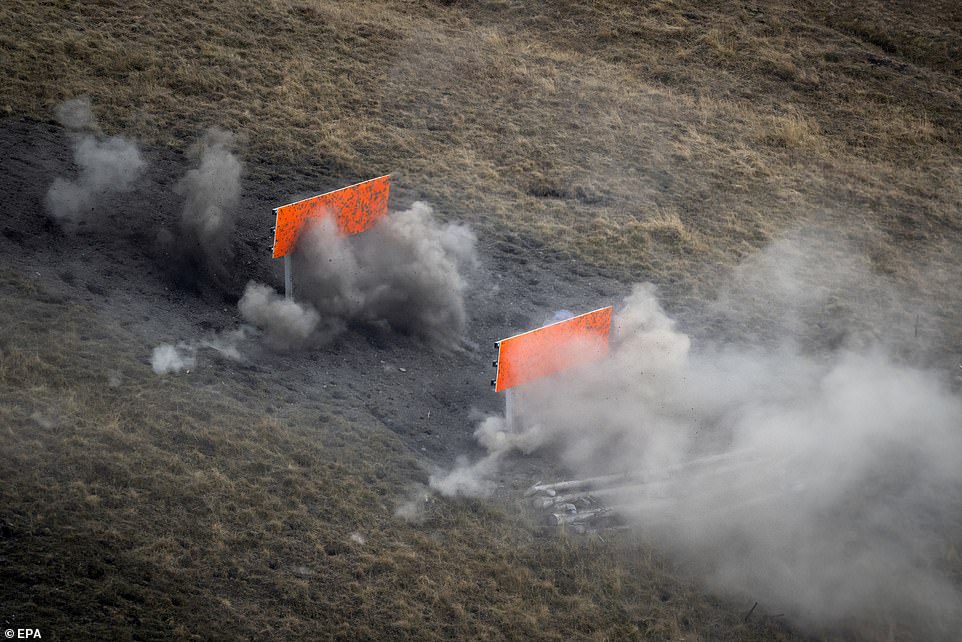 Live rounds are used in the show. Pictured: A target is hit by shots from an F/A-18 Hornet jet

Switzerland has been officially neutral since the singing of the Treaty of Paris 1815, following the final defeat and abdication of Napoleon Bonaparte.

However, the Swiss Confederacy had been effectively neutral since 1525 when it pledged never to wage a war of aggression again following defeat to the French at the Battle of Marignano ten years earlier.

It means the Swiss can lay claim to having one of the longest-standing neutrality pacts in the world which it maintained throughout both world wars – though it sometimes shot down planes of both sides that crossed into its airspace.

Despite its neutrality men aged 19 or older are required to complete compulsory military service.

Switzerland has around 140,000 military personnel

Switzerland has effectively been neutral for more than 500 years, but a poll from the summer shows citizens increasingly believing that is not the best way to protect their country.

Record-high numbers of Swiss said in July that the government should increase defence spending, maintain a fully-equipped army, and build tighter relations with NATO.

It comes after Sweden and Finland broke with decades-long neutrality agreements of their own to join NATO, saying Putin’s war in the east had prompted them to do so.

Overall, support for neutrality in Switzerland remains high – with 89 per cent saying they favour it – but for the first time in two decades that figure has fallen.

Back in January, before Russia invaded Ukraine, 96 per cent of Swiss were in favour of neutrality – meaning support has dropped eight per cent in just six months.

An unprecedented 52 per cent now favour their country ‘moving closer’ to NATO, though only 27 per cent want to actually join.

The new study was carried out by the Swiss military academy and the Centre for Security Studies, which polled 1,000 people between May and June.

The results were compared to a similar survey that was published in January.

Pollsters also found that 80 per cent of Swiss now favour their country having an army, while a record 74 per cent say it should be ‘fully-equipped’

Switzerland has one of Europe’s largest reserve forces and still has national service, but maintains only a tiny standing army supported by ageing tanks, armoured vehicles and planes.

Nineteen per cent of Swiss now want their government to spend more money on improving that force, up from just seven per cent early this year.