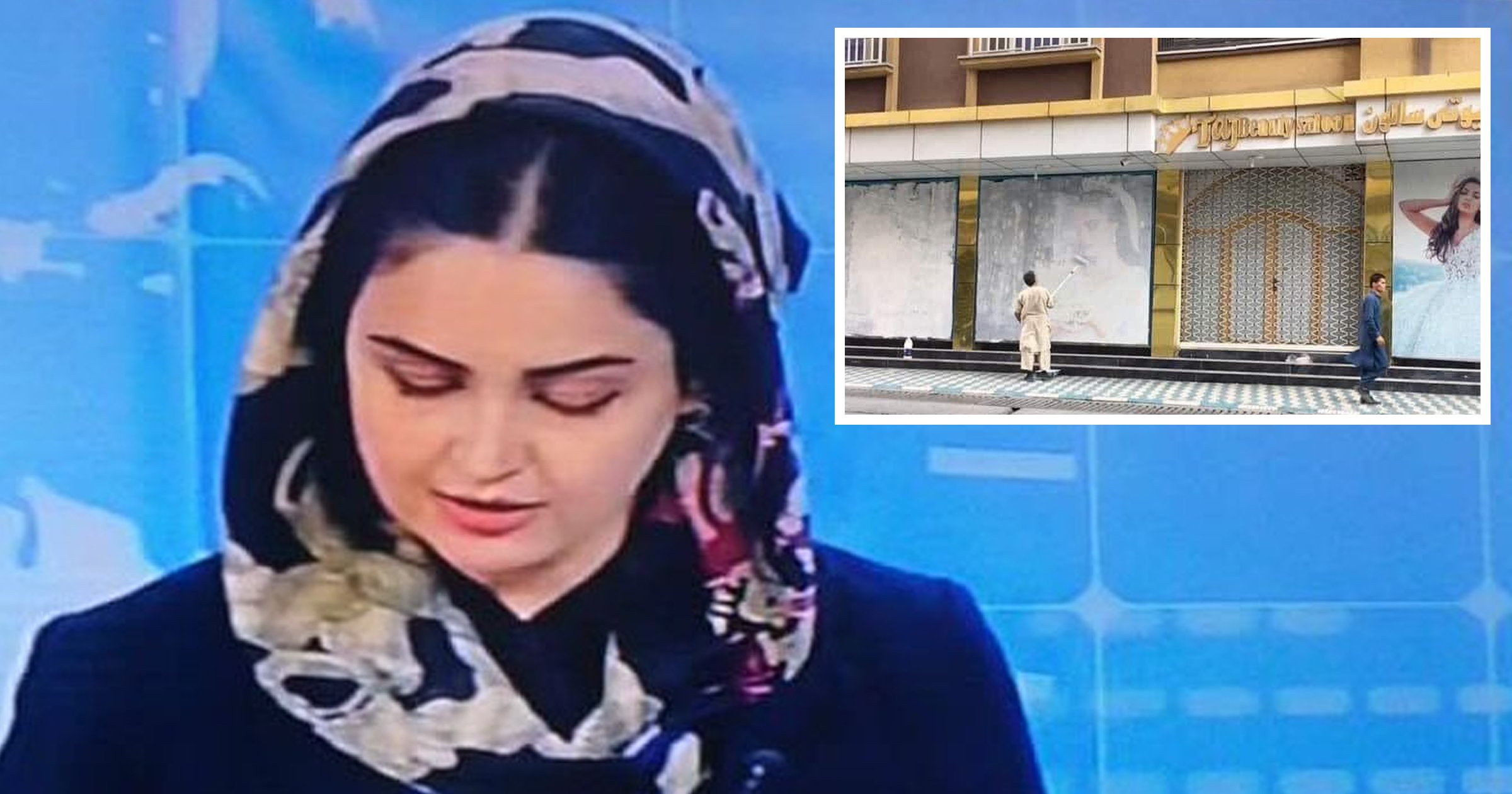 Taliban fighters have gone door to door seeking out women who played a role in public life, daubing paint outside their houses to mark their locations, according to reports.

It comes as female Afghan journalists are fearing for their lives and have been ‘taken off air’ after the country fell to the Taliban.

Homira Rezai, who grew up in Afghanistan until she was 13 and now lives in Dudley, spoke to the media about how the new regime were already drawing up lists of women to target.

‘Just an hour ago, I received an update from Kabul where they are going house to house searching for women who were activists, women who were bloggers, Youtubers, any women who had a role in the development of civil society in Afghanistan,’ she told BBC Women’s Hour.

‘They are going door to door targeting those women and marking the doors with bright pink or bright-coloured paint to ensure “this is the house we need to come back to and do something about them”.’

Prominent women in public life are issuing increasingly desperate warnings amid fears that the militant Islamist group will dole out brutal punishments and oversee a repressive regime targeting women.

Locals also say images of women on billboards have been covered up with the Taliban insisting that women should be completely covered with a burqa.

The group have a reputation for their brutal stance against women, who were barred from having an education under the previous Taliban-led government, and largely confined to their home.s

There have been reports of women being taken as sex slaves and brutally raped, while in July, others told of being marched home from work and ordered not return to their jobs.

Afghanistan’s first female mayor says she is now waiting for militants to come and kill her.

Ms Rezai added: ‘There is a very large number of people still stuck there, abandoned in Afghanistan. The women that I speak to [who are still there], all of a sudden, within a couple of minutes we both start crying.

‘When I say “what is the worst pain that you’re feeling”, they say “it’s not because the Taliban have come back, it’s not that the government has given up on us, it’s not the international community has failed us, but it’s because the 20 years that I have worked, it’s gone down the drain”.

‘It’s because the future of their children is bleak, it’s because the rights the children had, that for example the Hazara community gained in the past 20 years, have gone.’

In May, a bombing outside a Kabul school that killed 90 people appeared to target teenage girls leaving their classrooms, and was blamed on the Taliban.

Politicians are also in danger according to Zarifa Ghafari, 27, who rose to prominence in 2018 when she became the first female mayor in Afghanistan.

She told i on Sunday: ‘I’m sitting here waiting for them to come. There is no one to help me or my family.

‘I’m just sitting with them and my husband. And they will come for people like me and kill me. I can’t leave my family.’

One journalist whose name the Guardian changed to ‘Aaisha’ for her own safety, said reports of women and girls being beaten, forcibly taken as wives and raped had left her fearing that she could soon share their fate.

‘Firstly I am worried about myself because I am a girl, and also a woman journalist,’ the told the paper.

‘For many years, I worked as a journalist … to raise the voice of Afghans, especially Afghan women, but now our identity is being destroyed and nothing has been done by us to deserve this.

United Nations Secretary-General Antonio Guterres called on the Security Council on Monday to ‘use all tools at its disposal to suppress the global terrorist threat in Afghanistan’ and guarantee that basic human rights will be respected.

He said: ‘We are receiving chilling reports of severe restrictions on human rights throughout the country. I am particularly concerned by accounts of mounting human rights violations against the women and girls of Afghanistan.

‘We cannot and must not abandon the people of Afghanistan.’

Afghanistan’s U.N. ambassador Ghulam Isaczai told the Security Council on Monday that he was speaking for millions of people ‘whose fate hangs in the balance,’ as he warned that women and girls are ‘about to lose their freedom to go to school, to work and to participate in the political, economic, and social life of the country.’

Coronavirus UK: Why have some schools closed? – The Sun