Mazar-e-Sharif:  The Taliban carried out the biggest known capture of Afghan soldiers of the war, taking 150 prisoners after they chased units into neighbouring Turkmenistan and that country forced them back.

The operation took place in the north-western Afghan province of Badghis, and brought to 190 the number of soldiers captured by insurgents in the hotly contested district of Murghab — with 16 more soldiers killed — in less than a week.

Last Monday, an entire Afghan army company was killed or captured there. By Saturday, its defenders said the district had fallen mostly into Taliban control, though Afghan forces were still holding the district's government centre. 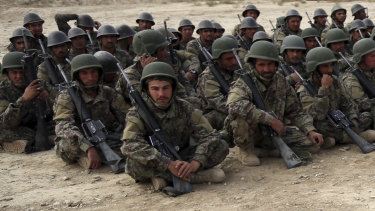 Afghan National Army soldiers carry out an exercise during a live firing at the Afghan Military Academy in Kabul, Afghanistan. Afghan officials say around 100 soldiers fled their posts and tried to cross into neighboring Turkmenistan during a week-long battle with the Taliban, in the latest setback for the country’s battered security forces.Credit:AP

The latest capture was perhaps the biggest setback for the Afghan security forces since a Taliban offensive in August in the south-eastern city of Ghazni killed as many as 200 soldiers and police officers, but few prisoners were taken then. The biggest recent capture of soldiers by the Taliban was about 50 who surrendered after a siege of their base, known as Chinese Camp, in Faryab province, also in August.

Mirza Mohammad Yarmand, a military analyst and retired general, expressed alarm at the losses. "I have not seen or heard of such a big loss in the Afghan army in recent years," Yarmand said. "If these numbers are true, then it's the biggest capture by the Taliban at one time and in the same area. This is a very sad incident."

In an unrelated attack in north-western Afghanistan, the Taliban overran an Afghan National Army base in the district of Qaisar in Faryab province, killing 15 soldiers and five police officers in hours of fighting on Saturday night and Sunday morning, according to the governor of the district, Rahmatullah Qaisari.

"This morning when our forces went to recover the corpses, the Taliban had hidden bombs under the bodies, which went off and killed two policemen," he said. That took the death toll there to 22.

The attacks underscore the fragility of attempts by the United States to negotiate a withdrawal from its 17-year engagement in the country.

President Donald Trump and his national security team had an hourlong, classified meeting on Afghanistan on Friday, a day after a top Afghan official openly complained that the Trump administration was keeping his government in the dark about its negotiations with the Taliban.

The meeting in the secure room at the Pentagon called "the tank" included Vice-President Mike Pence, Secretary of State Mike Pompeo, CIA Director Gina Haspel and Trump's national security adviser John Bolton, among others. The session was a classified briefing about Afghanistan, according to a White House official who spoke on condition of anonymity to discuss the subject of the private briefing. 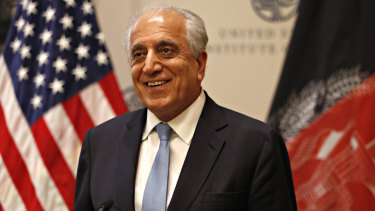 The Special Representative for Afghanistan Reconciliation Zalmay Khalilzad is negotiating with the Taliban over terms for the withdrawal of US troops.Credit:AP

The Pentagon has been developing plans to withdraw up to half of the 14,000 troops still in Afghanistan. Patrick Shanahan, acting secretary of defence, said he has no orders to reduce the US troop presence, although officials say that is at the top of the Taliban's list of demands in exploratory peace negotiations.

US Special Representative Zalmay Khalilzad, the administration's main negotiator with the Taliban, early last week concluded a 13-day session with leaders of the insurgent group to find a way to end the 17-year war.

The Afghan government is deeply concerned and frustrated by its exclusion from the discussions.

Afghanistan's national security adviser Hamdullah Mohib visited Washington on Thursday to publicly complain that the Trump administration has alienated the Afghan government, legitimised the militant network and is crafting a deal that will never lead to peace. His blunt remarks prompted a scolding from State Department officials.

Mohib, the former Afghan ambassador to the United States, said talks about withdrawing troops should be conducted with the Afghan government, which has a bilateral security agreement with the US. He also suggested that the negotiations conducted by Khalilzad, a veteran American diplomat who was born in Afghanistan, are clouded by Khalilzad's political ambitions to lead his native country.

What time are BTEC results released today and how are the grades decided?