Teachers are NOT more likely to get coronavirus than other key workers, official study finds

Teachers are no more likely to catch Covid-19 than those working in other frontline professions, according to official data.

Figures from the Office for National Statistics (ONS) suggest there was no difference in infection rates between primary and secondary school teachers and other professionals between the start of September and mid-October.

Other professionals included care home workers, healthcare workers, and those working outside of their home for at least one day a week.

It comes after trade unions blasted the Government for keeping schools open during lockdown, insisting they must be shuttered to protect educational staff.

But the chief inspector of Ofsted, which monitors standards in schools, warned yesterday that some may be sending children home ‘too readily’ amid the pandemic. 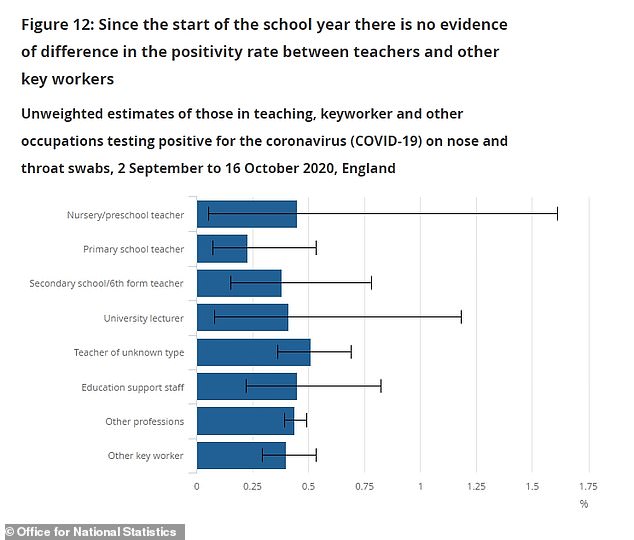 Amanda Spielman, the chief inspector of Ofsted, has warned schools may be sending pupils home ‘too readily’.

Speaking at the online National Children and Adult Services Conference, she warned there are ‘indications’ some schools are shuttering too early.

She also highlighted a rise in the number of parents opting to educate their children at home, adding it included ‘quite a proportion’ of the children that have special education needs.

Reports show the number of children attending school dropped from 89 to 86 per cent before the half-term break.

ONS statisticians found the highest and lowest percentage risks of catching Covid-19 between teachers and those in other professions overlapped, suggesting there was no difference in risk between them.

They calculated these – known as the standard deviations – to show the risk of catching coronavirus across all teachers, as the sample they tested was only a small section of the total number of teachers in the UK.

In their sample they found nursey teachers had the highest rate, at 0.45 per cent of all teachers in this sector surveyed, followed by university lecturers, 0.41 per cent, and secondary school teachers, 0.38 per cent (0.15 to 0.78).

Primary school teachers had the lowest rate, at 0.23 per cent.

In other professions 0.44 per cent of those surveyed tested positive for Covid-19.

Several trade unions have called for teaching staff to also move back to working from home during the second national lockdown, along with other workers.

The National Education Union (NEU) seized on ONS data showing a fall in the number of Covid-19 cases among secondary school students over the half-term break to suggest schools play a key role in transmitting the virus.

It accused the Government of a ‘squandered opportunity’ for failing to impose a circuit-breaker lockdown over the half-term period.

‘We should expect the rates in secondary schools to begin to rise again after the half-term effect, along with them the number of children who are off school,’ warned the union’s joint general secretary Kevin Courtney.

Amanda Spielman, the chief inspector of Ofsted, told a the online National Children and Adult Services Conference (NCASC) yesterday that schools should not be so keen to send students home.

‘There are indications that schools may sometimes be sending pupils home too readily,’ Ms Spielman said.

She highlighted a rise in the number of parents opting to home school this term – adding ‘quite a proportion’ of the children have special educational needs.

Ms Spielman said: ‘And here, many parents haven’t made an active decision to keep their child at home – they’ve been told that schools can’t accommodate them.

She added: ‘For the children with SEND that have been able to get back into education, it hasn’t been plain sailing either.

‘We’re hearing that many have suffered setbacks in their communication skills – probably down to having reduced social interaction for such a long time.

‘And, although some people are working really creatively to help families, this is an ongoing concern.

‘We’ll be looking at this more in the next report from our autumn visits.’

A report on school attendance has revealed it dropped from 89 per cent to 86 per cent ahead of the October half-term break.

TEACHERS AT NO HIGHER RISK OF INFECTION FROM COVID-19