Alright everybody, we’re in the home stretch of the 2022 NFL regular season. We have learned a lot about the teams that make up this here league. Mainly, some of these teams are not serious about themselves or the extremely talented players they hire. First, we start off with a team that definitely wishes it could simulate the rest of its season.

The Houston Texans are just awful

This Texans' season is beyond over. They barely got off the ground. While still mathematically alive for the playoffs, they are metaphorically dead with the Miami Dolphins putting them out of their misery this past weekend in a game that was much worse than the final 30-15 score suggested.

It was 30-0 at halftime. Kyle Allen, who was starting at quarterback in place of the recently benched Davis Mills, posted a rating of 4.2 out of 100. The Texans as a team had just 35 yards of offense in the first half. The Dolphins could have set the record for points in a game if they didn’t take their foot off the gas in the second half. This season has turned into the worst-case scenario, and now their future is suddenly in doubt again less than a year after they fired David Culley, who put together a more competitive team than this year’s edition.

Once again, the Texans find themselves in a hole where they will likely end up firing a one-year head coach and this time, general manager Nick Caserio might be feeling the heat too. Fixing the Texans after the fallout of the Deshaun Watson trade was always going to be a multiyear project, but this team is barely even putting up a fight right now. It’s bad. Real, real bad. Maligned wide receiver Brandin Cooks is doing and saying whatever he can to get out of this mess, but this black hole traps everyone that’s playing a part in it.

Now, the Texans ownership has the tough task of selling this fan base the idea that they can be competitive in the near future. Rebuilding is one thing, but looking completely incompetent and directionless is another. This doesn’t look like what the Bears are doing with Justin Fields where they’re scoring a bunch of points and losing. The Texans are lifeless and it’s unclear what’s next for them. 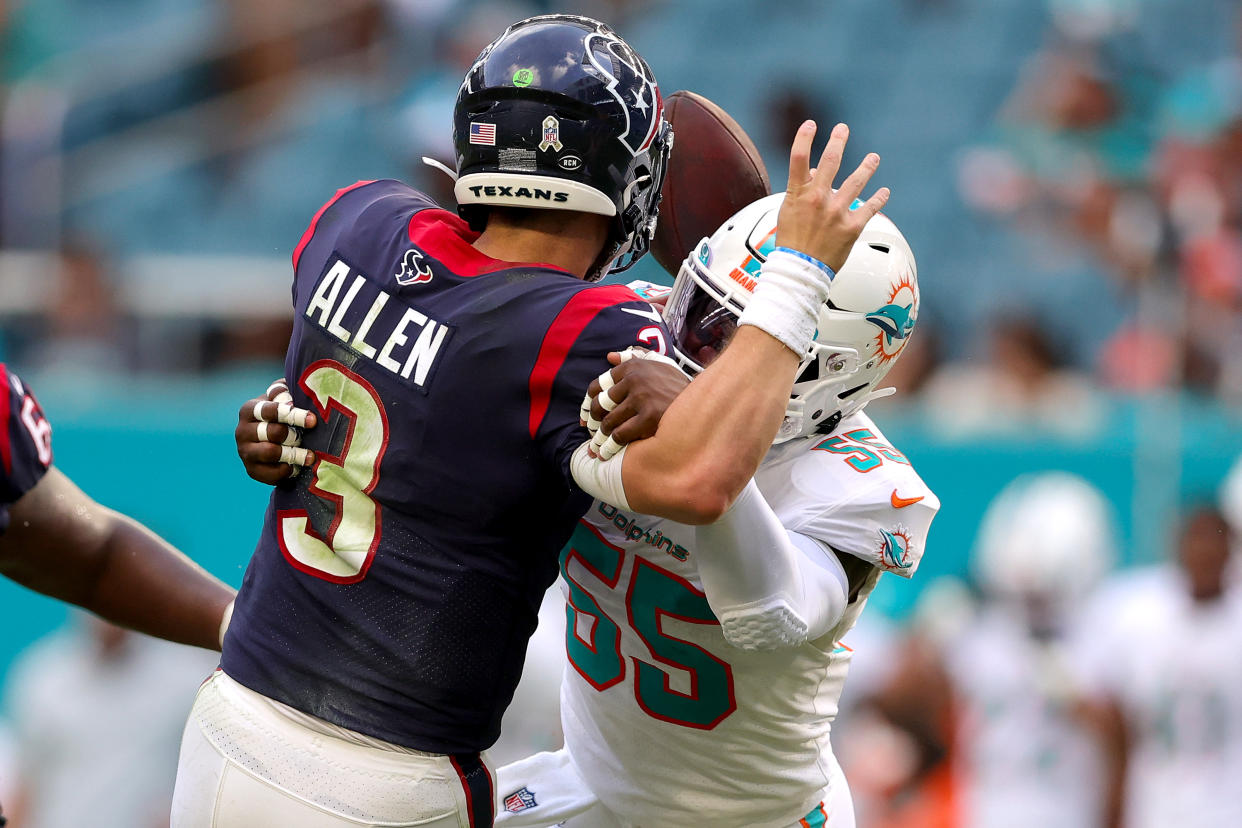 Being able to add Bryce Young or C.J. Stroud in the draft will be a solid first step, but the problems that encompass this team are deeply rooted into the ground. The defense needs an overhaul, the offense needs a new quarterback and the Texans probably need to find a head coach who's better equipped for this era of football. Lovie Smith has been one of the most important coaches in this century of football, but the game appears to have passed him by.

For the second time in as many years, the Texans need to start over. Hopefully their next head coach (and maybe general manager) can start to right the wrongs of the previous regimes and get this thing moving in the right direction. The product they’re giving their fans now is totally unacceptable.

Everyone has had a job where they’re learning on the fly and making mistakes as they figure their way around a new workplace. Unfortunately for Jeff Saturday, his mistakes are broadcast on national television as he attempts to become a quality head coach for the Indianapolis Colts. That cause took a major blow on Monday night with how the Colts lost their game to the Steelers.

The Colts largely look the same under Saturday as they did with Frank Reich prior to Sam Ehlinger being given the starting quarterback job for two games. Matt Ryan has moments of brilliance and moments where it looks like he needs to retire. Indianapolis' defense has largely continued to be good. However, game management is something that Saturday himself has full control over, and he failed mightily on Monday when the Colts, trailing 24-17 late, ran a grand total of two plays in a full minute of game time despite having all three timeouts.

Call a timeout, man. This isn’t like the early days of cellphones where the minutes rollover to your next plan. You don’t get to start the next game with six timeouts just because you saved them in your previous game. Saturday has played in enough big, tightly contested games to know that the clock is a serious factor when it comes down to the end of the game. Saturday managed the clock well enough for the second half that the Colts had three timeouts for a crucial drive at the end of the game, and then … he just didn’t call the timeouts. 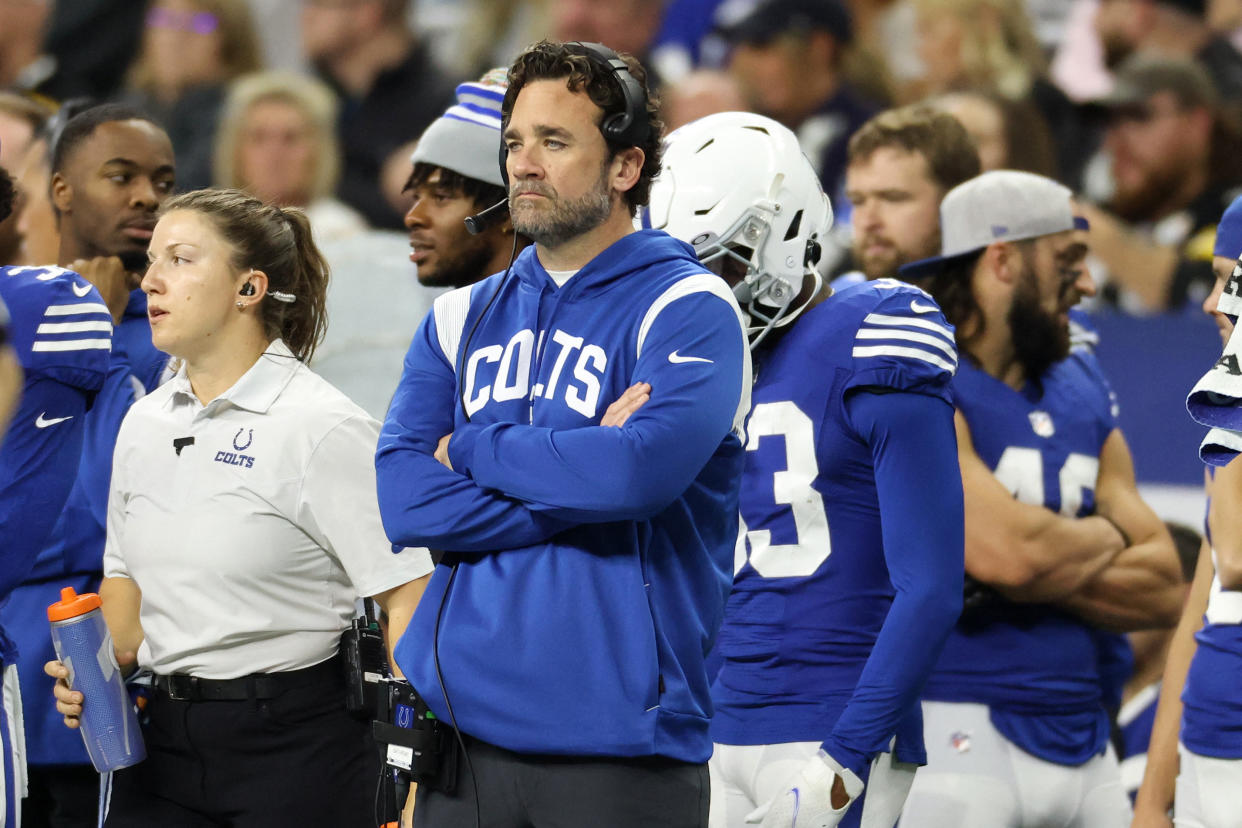 To be fair to Saturday, he owned up to his blunder in a media conference this week, but it remains jarring to see someone who has played at such a high level in the NFL become useless in a spot he should be familiar with. Analysts often joke that coaches should play "Madden" in the offseason to practice their clock management skills, but that might be true here.

At the very least, it’s unlikely that Saturday makes a gaffe this bad again. If he does, at least we get to do some laughing at Jim Irsay next time. He’s the one who put Saturday and the Colts in this predicament.

Ravens desperately need to get Lamar some help

Baltimore, you know you have one of the most talented quarterbacks in the history of the league, right?

Lamar Jackson is capable of carrying the load of an entire offense on his back, but the way that the Ravens are operating isn’t really necessary. They’re stuck like this for the rest of the season, but at some point they need to make a more concerted effort to put weapons around their uber-talented franchise quarterback. Jackson almost beat the Jaguars by throwing a pass to 35-year-old DeSean Jackson, but he should not be finding himself in these circumstances.

This year has only further cemented the fact that the Ravens need to re-sign Jackson as soon as they possibly can before his price continues to increase. To be fair, the Ravens have again suffered through a litany of injuries that have capped the overall potential of this team, but even when they’re healthy there’s clearly room to improve at the skill positions. Just because you have a quarterback capable of carrying an Atlas-sized workload doesn’t mean that has to be the preferred path.

The Ravens sit at 7-4 and seem likely to make the playoffs with how their defense has improved as the season has gone along. That’s part of the curse of having a quarterback as good as Jackson. The team is going to win a lot of games as long as he’s under center and when he’s locked into his MVP form, Jackson is as good as any quarterback who has played the sport. Now imagine how good this offense could be if they were more committed to keeping his supporting cast at a high level.

They need to figure out how to do that with Jackson’s well-earned contract demands factoring into their future team-building. He has repeatedly proven himself as an invaluable commodity for this franchise on the field and will be rewarded like that at some point in the future. The Ravens' offense would be dead on arrival without Jackson back there.

It’s difficult to say this about a team that continues to win games with one of the best quarterbacks in the league, but the Ravens need to consider a change at offensive coordinator as well. Greg Roman was the perfect coach for Jackson’s early career when he was getting accustomed to the NFL, but they need to shake it up. The route combinations are getting stale, the spacing is bad and Roman still has not been able to develop a dropback passing game that fits the talent the Ravens have.

The cupboard is not totally bare outside of Jackson. Mark Andrews is one of the best tight ends in the league, Devin Duvernay has developed as a quality wide receiver and Tyler Linderbaum has extremely high upside at center.

Just to pose a couple thoughts to the Ravens and their front office: Aren’t you tired of having one of the best quarterbacks in the league and still being constipated on offense? Do you really want Jackson to be Superman every week?

Make it easier on Jackson, and yourself in the process. This upcoming offseason is as good a time as any. 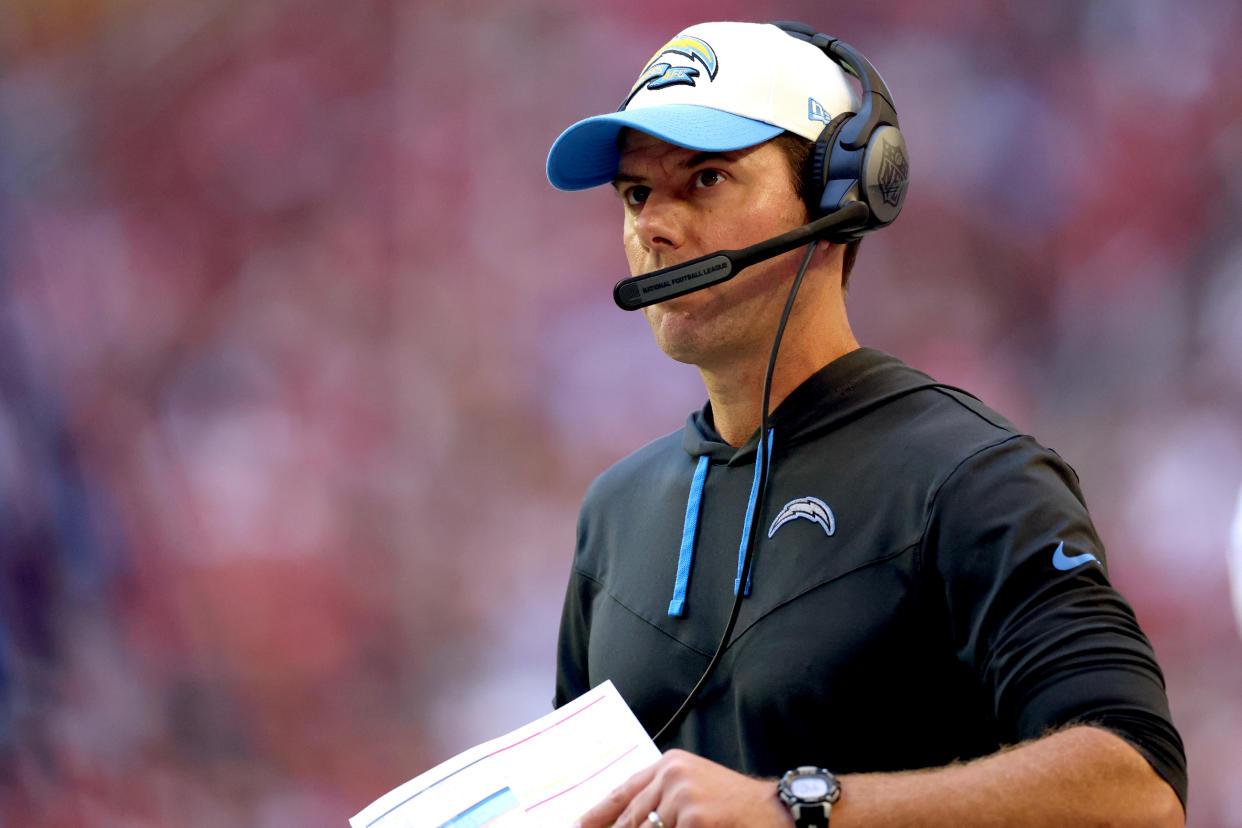 2-point enthusiasts get a win

Thank you for making football more fun. Thank you for adding immense stakes to the end of games. Most important, thank you for your avoidance of overtime.

With their Week 12 games on the line, trailing by one point, both coaches went for two points and the win in the final moments of regulation — and they both converted.

There won’t be any hot two-point or analytics discourse this week, only because those two coaches were successful in their attempts to score two points. There’s nothing for the people on television who refuse to read or learn to get mad about, but the recognition should be the same. Football culture is already too conservative in a myriad of ways, so we should examine these moments that buck the trend and see if they’re moments that can be interwoven in the fabric of a sport that we already love.

The truth of the matter is that going for two in these situations and being aggressive gives teams much more control over their outcome — whether that be good or bad. Two-point conversions are usually a coin flip, but it’s a better coin flip than the literal one that kicks off the overtime proceedings in the event of a tie. In the case of the Jaguars and the Chargers, they already had the ball and kicking it to the other team at the start of overtime is just as dangerous as going for it at the end of a game.

The end of games is all about control, and these two teams capitalized on having the ball in order to add wins to their column. It’s certainly not a foolproof idea and there will be losses taken because of it, but celebrating the wins is just as important. At the end of the day, it’s better to control your future.