TfL Tube, London bus and UK train strike dates: Travel advice and everything you need to know as thousands of RMT workers walk out and Britons work from home to avoid chaos

The summer of rail strikes continues this week, with train services crippled by the industrial action which has seen just one in five trains running today.

Stations across the country are being affected by the ongoing strike action, which has now seeped into the London Underground network, with a Tube strike set to send the capital into chaos tomorrow.

A knock-on effect is also expected in the days following the strikes, with service levels set for only 70 per cent capacity on Friday and 85 per cent on Sunday.

The strike action means only half of the railway lines across Britain are currently operating.

In recent months, stations across Scotland and Wales have been left completely cut off by the crippling strikes and service levels have drastically dropped as workers protest over their pay.

Here, MailOnline takes a look at how the rail strike could impact you, the next potential action on the horizon and why workers have walked out. 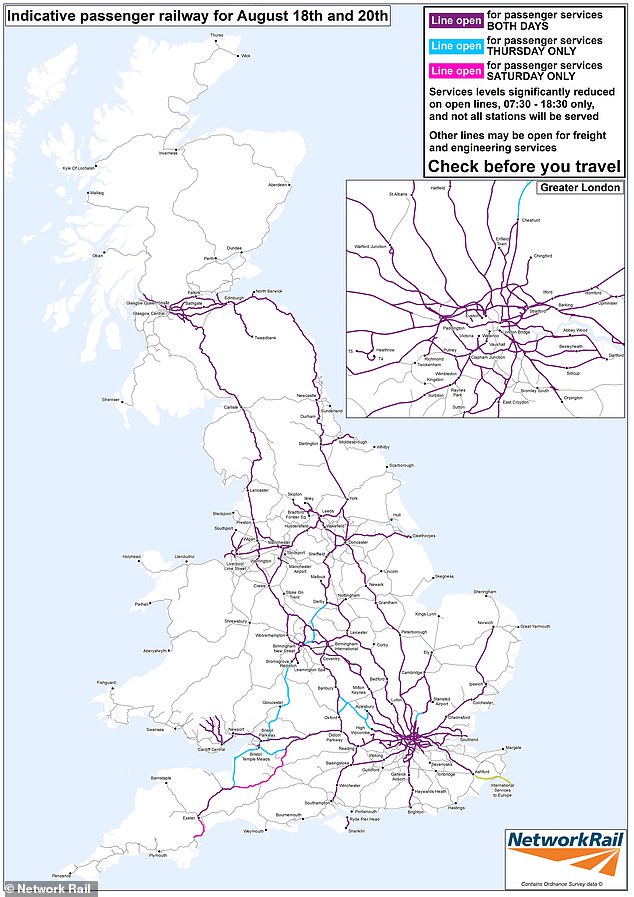 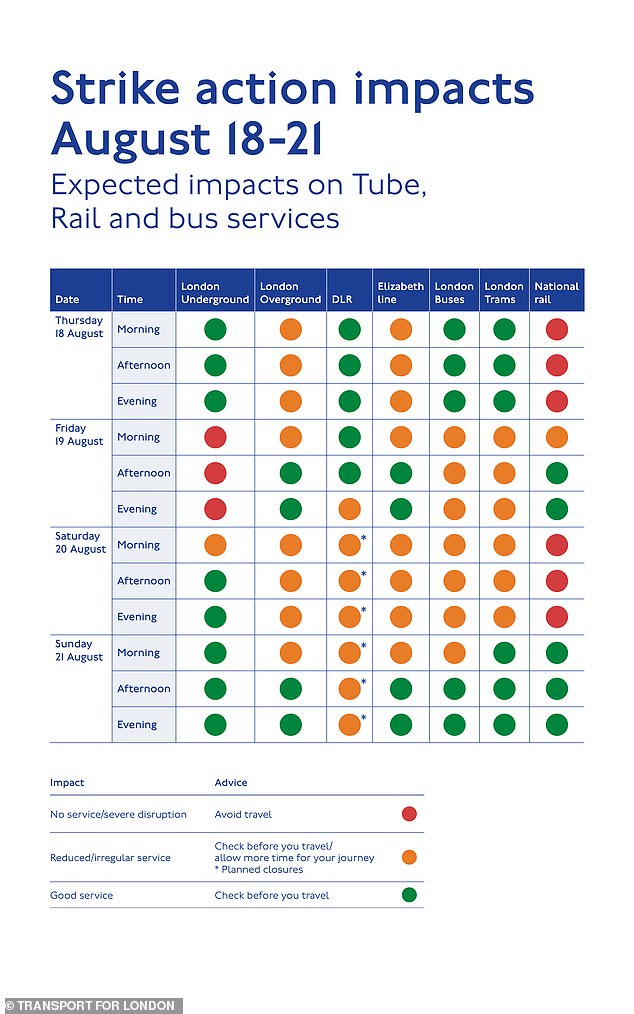 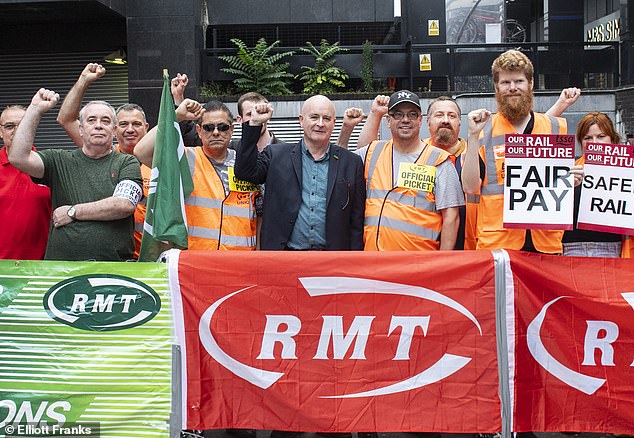 When is the next TfL Tube Strike?

The Rail, Maritime and Transport Workers’ Union (RMT) have announced there will be a tube strike on Friday August 19.

Members of the RMT Union on the London Underground will walk out for 24 hours over an ongoing jobs and pensions dispute.

In total, around 10,000 tube workers in the union are expected to be taking part in the strike, causing chaos in the capital and causing commuter woe for millions.

TfL has said that customers should prepare for ‘severe disruption on all lines’ and ‘little to no services throughout the day. No Night Tube.’

‘If you need to travel, river services, London Cable Car and Santander Cycles will be available to help you get around.’ It also reminds visitors that much of Zone 1 London is walkable.

The tube network is set to resume on 8am on Saturday but there is some knock-on disruption expected into the weekend.

Which lines will be affected?

All Tube lines are expected to be affected by the industrial action, including the Overground network.

Bosses say lines on the Overground will run sparsely or not at all throughout Friday.

Members of Unite at London Underground, Croydon Tramlink, Victoria coach station, Dial-a-Ride and river service will also join them and walk out on Friday.

During the last London Tube strike, a few lines or some sections of lines ran a reduced service, and trains stopped every 15 to 20minutes. Elsewhere, whole lines and branches of lines were closed or part-suspended, leaving millions of commuters stranded. 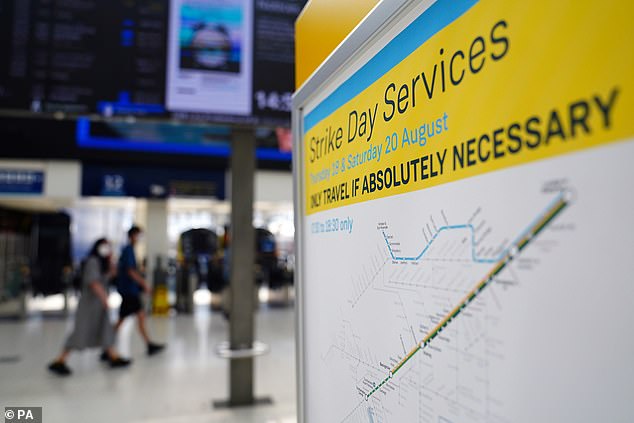 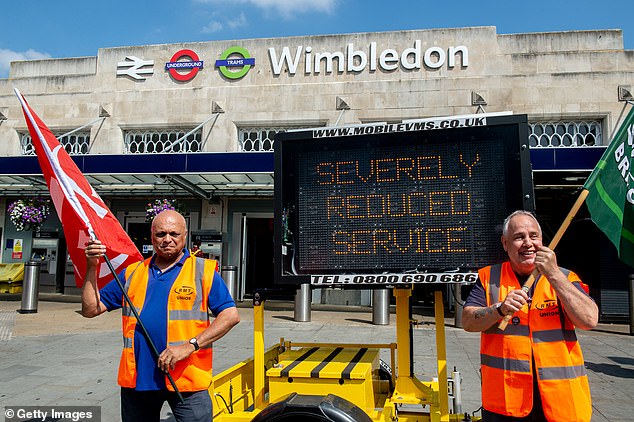 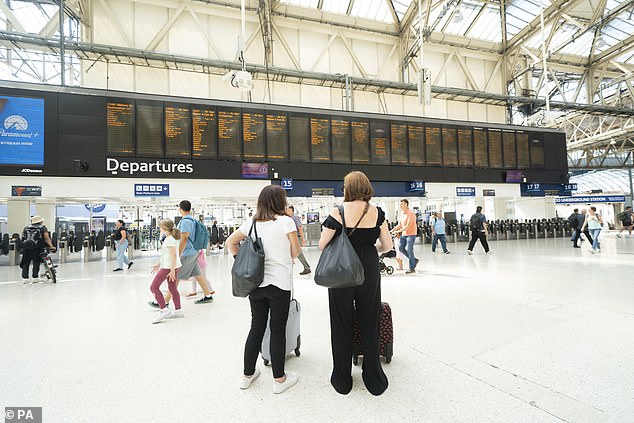 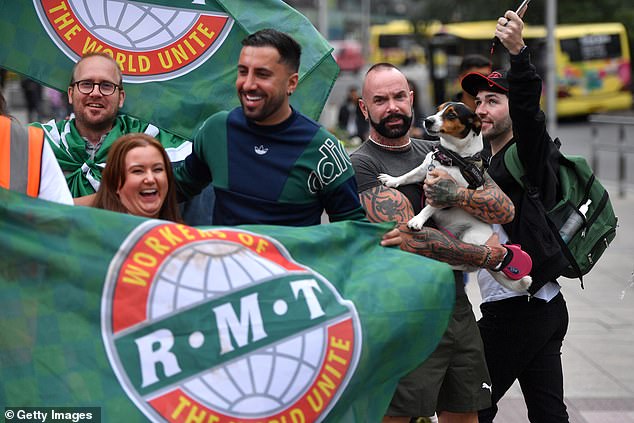 Commuters are being urged to use alternative modes of transport if possible and keep up to fate with delays or service suspensions on the TfL website.

On either side of the strike on Friday, UK-wide strikes by RMT Union members have caused chaos.

The Bakerloo Line will also be affected with no service north of Queen’s Park.

Will there also be a bus strike?

Some buses will suspend their services on Friday and Saturday as part of a 48-hour walkout.

Around 1,600 bus drivers are involved in the industrial action over the weekend, causing disrupting in west and south west London and parts of Surrey on both days.

No night bus services will run on any of the routes either.

When is the next National Rail strike?

There will be strikes across the rail network on Saturday following on from the strikes held today. 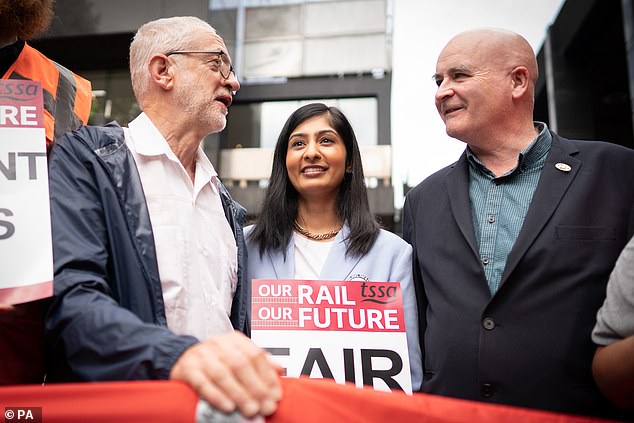 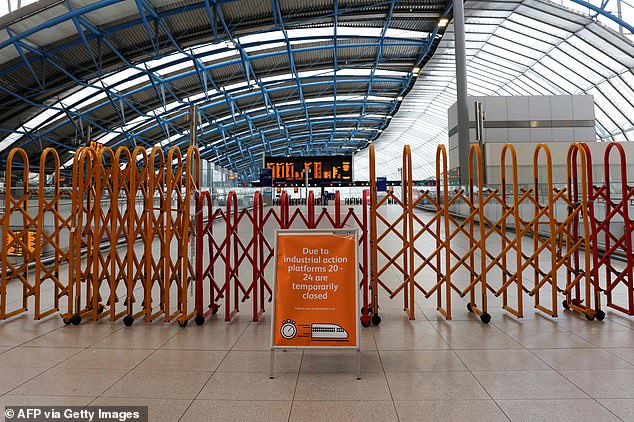 WATERLOO STATION: A message board warns of travel disruption at Waterloo Station in London 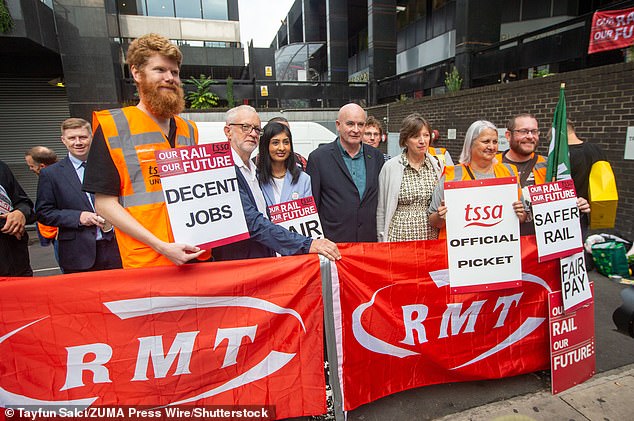 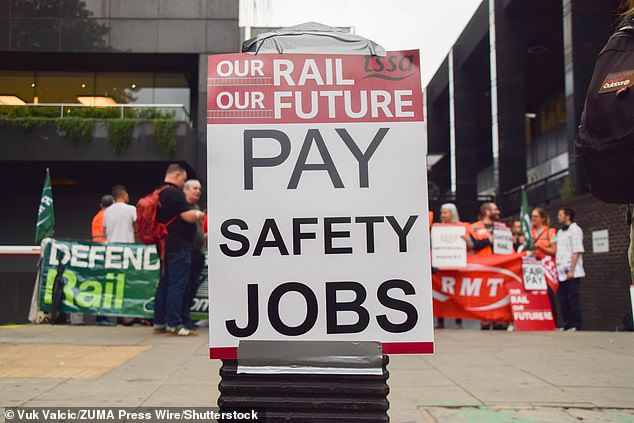 The same services were impacted by strike action today.

Train operators have released plans for have the services will be impacted during Saturday’s strike. Trains will only operate between 7.30am and 6.30pm on both strike days and will start later than normal on the following mornings.

Operators have laid out the following plans for this coming weekend.

Avanti West Coast  The operator has been running a reduced timetable since Sunday due to many drivers no longer volunteering to work on their rest days for extra pay. On strike days there will be one train per hour in both directions between London Euston and each of Birmingham, Liverpool, Manchester and Preston. A limited service will operate to Glasgow. Several areas will not be served, such as Blackpool, Edinburgh, North Wales and Shrewsbury.

Caledonian Sleeper  All departures are cancelled for last night, tonight and Friday night.

CrossCountry  No direct services will run between Birmingham and Bristol, Cambridge, Cardiff, Nottingham, Peterborough and Stansted Airport. A very limited service is planned from Birmingham to Manchester and Southampton, and from Derby to Edinburgh via Leeds, York and Newcastle.

East Midlands Railway  Just one train per hour will run in each direction between London St Pancras and each of Nottingham and Sheffield; and between Derby and both Matlock and Nottingham. All other routes will be closed.

Gatwick Express  Services will be suspended. Passengers travelling to or from Gatwick Airport can use Southern and Thameslink trains. 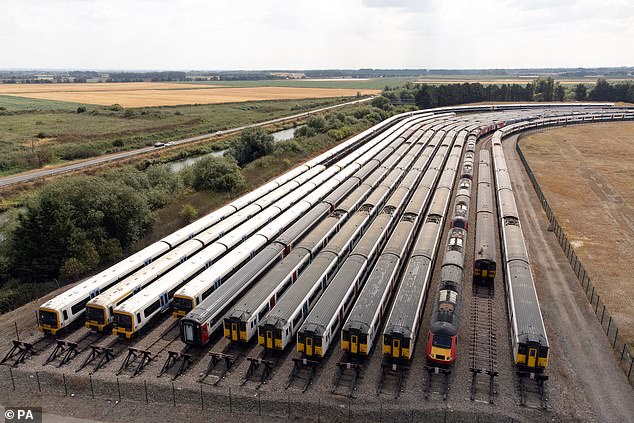 Trains are stored at a sidings in Ely, Cambridgeshire, as rail services have been severely disrupted 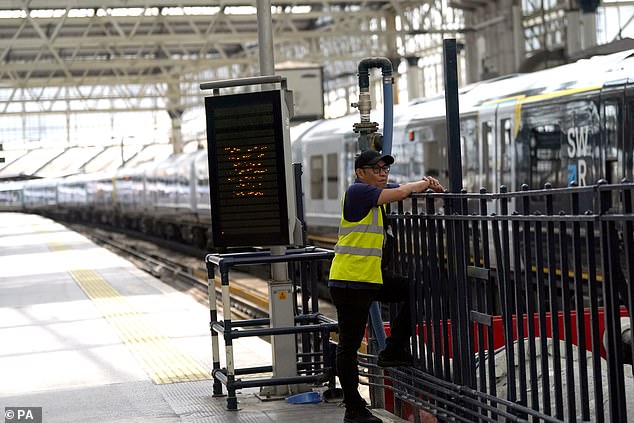 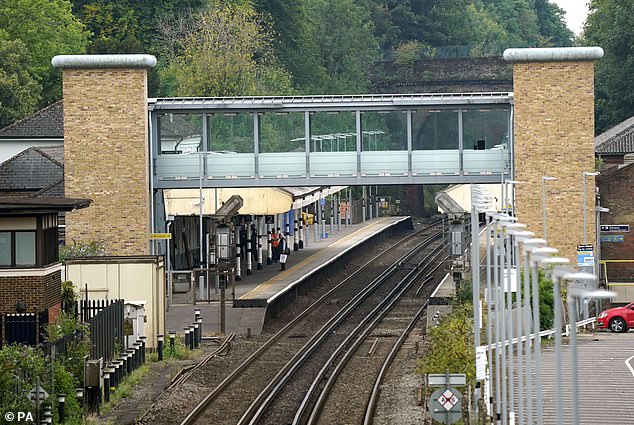 A view of Winchester railway station in Hampshire, which has also been affected by the strikes 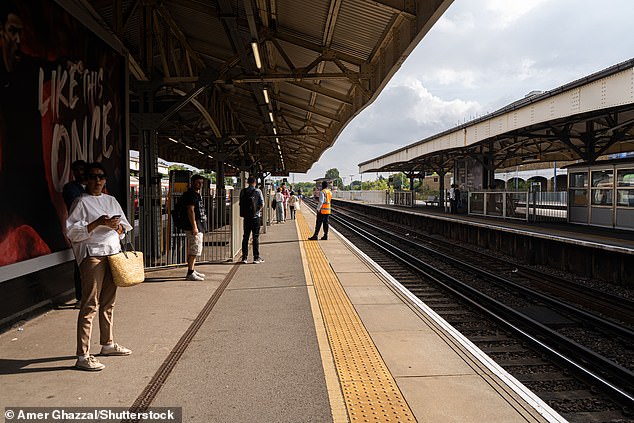 Passengers waiting on the platform at a quiet Wimbledon station , south west London 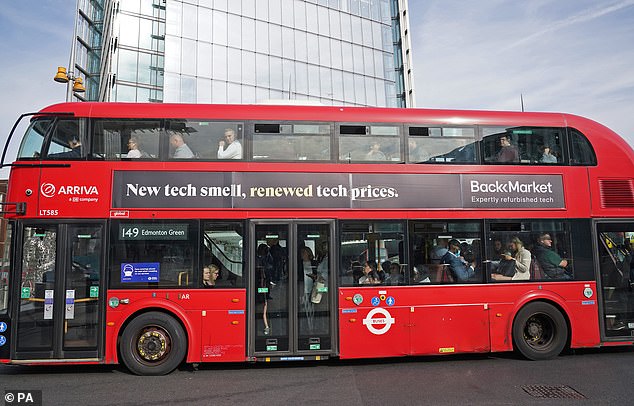 Grand Central  Just three trains in each direction will run between London King’s Cross and both Northallerton and Wakefield Kirkgate.

Great Northern  There will be very few trains, with no services east of Ely to King’s Lynn.

Great Western Railway  No services will run on many routes, such as all those in Cornwall, branch lines in Devon, between Cardiff and Swansea, and between Bath and Portsmouth.

Greater Anglia  On strike days, the company will not run any trains on its regional and branch lines. A very limited service will operate on some routes to and from London Liverpool Street.

Heathrow Express  A full service will operate, but only between 7.30am and 6.10pm.

Hull Trains  Trains will only run between Doncaster and London King’s Cross, with five in each direction.

London North Eastern Railway  Only one train per hour will operate between Edinburgh and London King’s Cross, and two per hour doing part of the route.

London Northwestern Railway  A limited service will run to and from Birmingham New Street and both Crewe and London Euston. Other routes will be closed.

Lumo  A reduced timetable will be in place between London King’s Cross and Edinburgh. 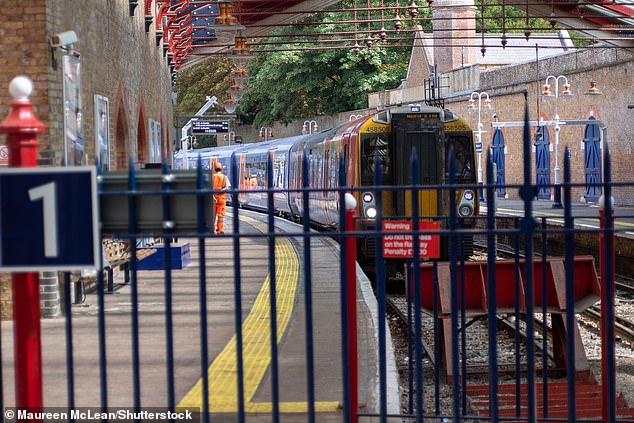 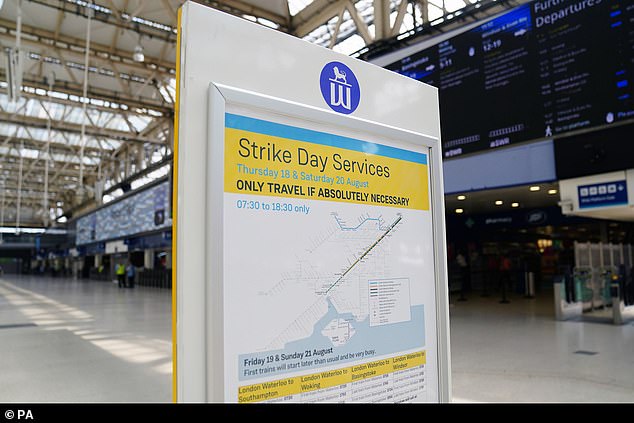 Northern  Passengers are urged ‘not to travel’ as only a small number of routes will have trains. Routes that will be open include Liverpool to Manchester; Manchester to Alderley Edge; York to Leeds; and Leeds to Sheffield.

ScotRail  Trains will only run across the Central Belt, Fife and the Borders.

South Western Railway  A ‘severely limited service’ will run, and only between London Waterloo and Basingstoke, Southampton, Windsor and Woking.

Southeastern  Only 44 out of 180 stations will be open, with the vast majority of the network in Kent and East Sussex closed. The high-speed route to Ashford International will be open.

Southern  Much of the network will be shut down. Services will run on the Brighton Mainline to London Bridge and London Victoria, with additional trains from Tattenham Corner, Epsom Downs, Sutton and West Croydon via Crystal Palace.

Thameslink  There will be far fewer trains than normal. Services will be split north and south, with nothing running between London St Pancras and London Bridge.

TransPennine Express  There will only be a very limited service, with just these routes open: Manchester Airport to Preston; Manchester Piccadilly to York; Newcastle to Edinburgh; and Cleethorpes to Sheffield.

Transport for Wales  Most lines will be closed. An hourly service will run between Cardiff and Newport, with limited trains elsewhere.

When are RMT workers striking?

RMT Union members are have walked out today and plan to do the same again on Saturday.

The Union says mass walk outs are due to ‘an ongoing dispute over pensions and jobs’. 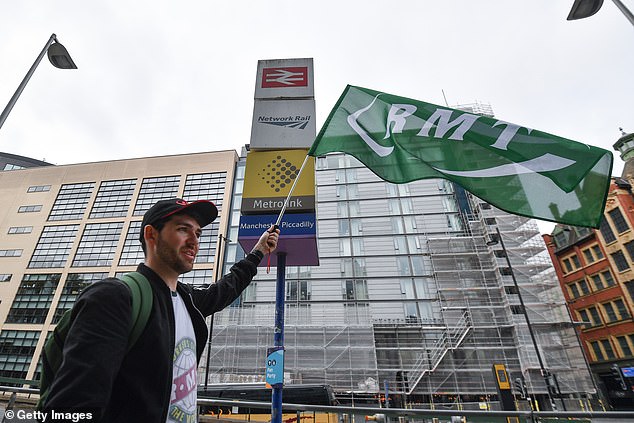 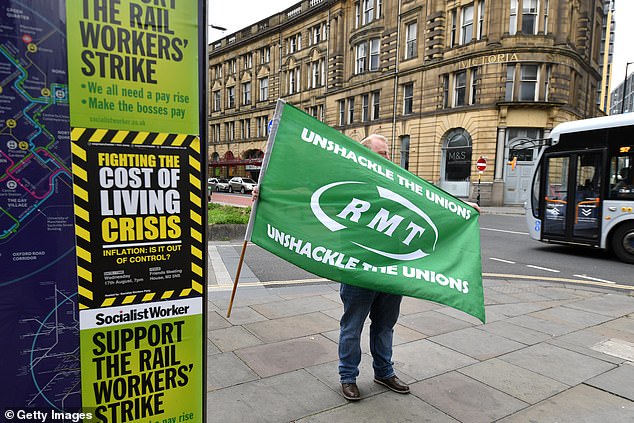 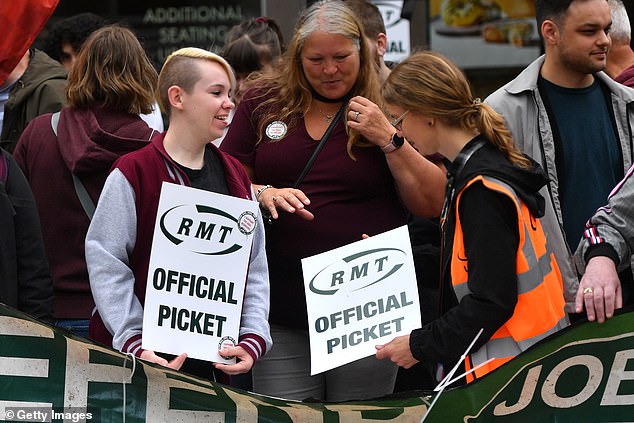 ‘LUL [London Underground Limited] and TfL management have consistently refused to engage in discussions around safeguarding jobs, pensions and conditions on the spurious grounds that they are unable to give any assurances to our members until they have a financial settlement with the government’, it said in a statement.

RMT general secretary Mick Lynch added: ‘Our members will once again take to picket lines in this important dispute over pensions, jobs and conditions.

‘They have been messed around by TfL and Mayor Sadiq Khan. And to add insult to injury they have not seen the detail of this funding letter from government.

‘Unless there can be assurances made about jobs, pensions and detrimental changes to working conditions, then our strike on 19 August will go ahead.’

How much do train drivers get paid on average?

On average, train drivers earn £60,000 – double that of teachers, nurses and police.

Rail industry sources have previously told MailOnline that train drivers now earn an average of £60,000, based on the 2021/2022 year – a 35 per cent rise over the last ten years.

This is a weighted average of basic pay that has emerged in a salary review paper by the Rail Delivery Group, which surveyed rail operating companies across Britain. 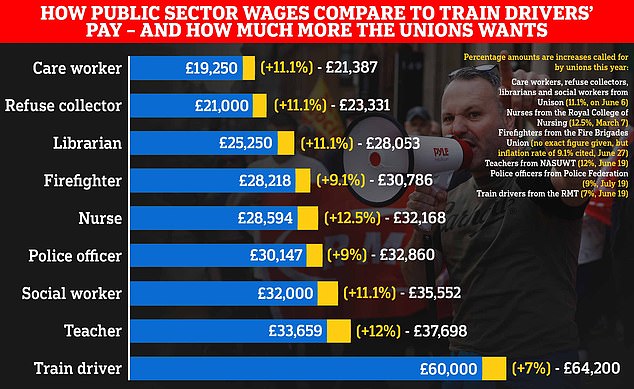 The industry sources added that a small percentage of drivers can even earn over £100,000 if they complete large amounts of overtime, although they tend to be the drivers who do the most to maintain the network’s resilience during disruption.

Train drivers are very well paid when compared to public sector roles – with care workers earning an average of £19,250, according to National Careers Service data.

Network Rail puts these averages slightly higher at £31,000 for maintenance workers and £44,000 for signallers. The RMT says its average rail members earn £33,000, while Network Rail says the overall average for all rail workers is £36,000.

The RMT puts the average figure for train drivers at £54,000 – slightly lower than the figure from the Rail Delivery Group, but still well above most public sector workers.