Home » World News » The E.U. will propose a vaccine passport system for Europe. 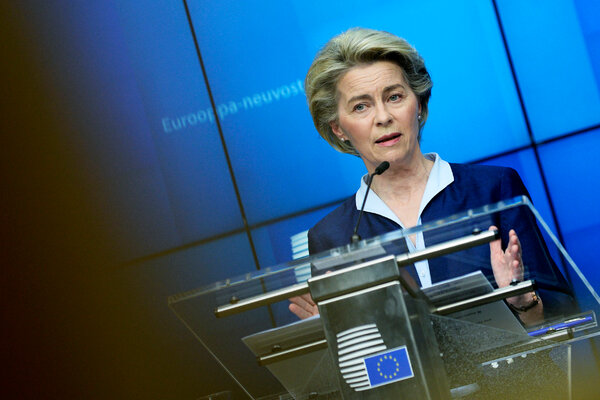 The European Union will propose issuing a certificate called a Digital Green Pass that would let people who have been vaccinated against the coronavirus travel more freely, Ursula von der Leyen, the president of the European Commission, said on Monday.

“The Digital Green Pass should facilitate Europeans’ lives,” Ms. von der Leyen wrote on Twitter. “The aim is to gradually enable them to move safely in the European Union or abroad — for work or tourism.”

The announcement followed an intense debate at a virtual meeting last week that laid bare deep divisions among leaders of the bloc’s 27 member nations.

Tourism-dependent nations like Greece have been pushing for such a plan to help salvage the summer travel season, while others, led by France, have been wary of the potential for discrimination between vaccinated and non-vaccinated Europeans, as well as possible infringement on personal data protection.

“In the future, it will certainly be good to have such a certificate, but that will not mean that only those who have such a passport will be able to travel,” Chancellor Angela Merkel of Germany said after the meeting last week.

Vaccination efforts in the European Union have generally gotten a sluggish start. Just 5 percent of the bloc’s population has received at least one shot of vaccine so far. But the certificates will go beyond vaccination status to include the holder’s wider medical history concerning the virus, according to Christian Wigand, the commission’s spokesman.

“We will also be looking at other categories of information to avoid discrimination of citizens, such as test results and statements of recovery,” Mr. Wigand said on Monday.

Getting the system set up and issuing certificates would take at least three months, the commission said. It was not immediately clear what legislative and technical steps would be required, nor whether the system would extend beyond European Union citizens.

The commission said there should be a way to scale it up globally, in cooperation with the World Health Organization. But when pressed for further details, Mr. Wigand asked for “a little bit of patience,” explaining that “this is all very fresh.”

After the meeting with the 27 national leaders last week, Ms. von der Leyen said: “It is important to have a European solution, because otherwise others will go into this vacuum. Google and Apple are already offering solutions to the W.H.O., and this is sensitive information.” Apple said afterward that Ms. von der Leyen may have misunderstood and that the company was not currently offering such a solution.

Why is the Insurrection Act trending online?