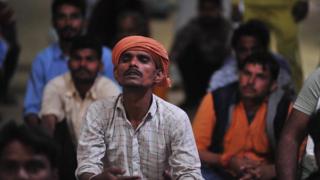 When Arif (name changed) was released from a prison in western India on 31 March, he longed to return home quickly.

But over the next fortnight, he was hounded out three times in two cities – from his own home and then that of a fellow inmate – before landing up in a shelter home for beggars. He fled, tried to return home again, and is now quarantined in a friend’s house.

Arif’s heart-rending story underlines the trauma and stigmatisation staring at many Indian prisoners who have been freed in the middle of the country’s grinding lockdown to stop the spread of the coronavirus.

The 32-year-old lanky man, who drove taxis for a living, had been held in Taloja prison, in the western state of Maharashtra, for six months without trial for allegedly stealing a mobile phone.

Arif is among some 22,000 prisoners who have been released so far on personal bonds or on extended parole, according to data compiled by the Commonwealth Human Rights Initiative.

His story was told to the BBC by the agencies who are trying to help him rebuild his life. Attempts to reach Arif directly failed. It is one of potentially thousands of similar tales of struggle and hardship across the country.

The release of men and women like Arif came after the Supreme Court asked states to free inmates in India’s notoriously overcrowded prisons to prevent the spread of Covid-19. (The country’s 1,339 prisons house some 450,000 inmates, 69% of them waiting for their trials to begin. Average occupancy rates can climb to 118%.) The judges said that convicted prisoners who are serving sentences of up to seven years or less could be freed. Also, those still under trial could be considered for release.

But the day Arif was released, no-one came to pick him up.

Home is Mahad, a city ringed by low-slung mountains, some 150km (93 miles) from the prison. His father is dead. His wife had left him last year, complaining of his growing addiction to alcohol. His disabled brother, who did a menial job at a private firm, was stuck at his workplace and didn’t have money to pay for transport. And his sick, ageing mother had defaulted on rent for six months at her one-room home and was being fed and looked after by her neighbours.

So penniless and hungry, Arif walked and hitched rides with essential services supply trucks on the expressway to reach home the next evening. But there, the neighbours protested.

“He has come from Mumbai. We can’t let him in,” they said. The western city, India’s financial and entertainment capital, has become the epicentre of Covid-19 in India, with more than 11,000 reported infections and 430 deaths so far.

A distraught Arif turned back. He borrowed a mobile phone and 400 rupees from his mother. He waved down a passing essential supplies van, paid the driver 200 rupees and rode back to Mumbai, where a fellow inmate had promised him shelter.

Then someone in the neighbourhood called the police, and locals hounded him out again. “He was on the streets of Mumbai now. His mother called me urgently and asked me to do something for her son,” Manohar Fansekar, a social activist working with inmates, told me on the phone.

In early April, Arif was picked up from the streets and taken to a shelter for beggars on the outskirts of Mumbai. He stayed there for more than three weeks. On the night of 30 April, he fled the shelter and again hitched a ride back home.

“I want to go home. Everybody is going home. Give me some money and let me go. My mother has been calling me,” he had told a social worker before he fled.

But again, irate neighbours didn’t allow him to enter.

So he left for a friend’s house in the city. Last week, say social workers, he got drunk and took a rickshaw to his house to see his mother. But before he could enter, he had an altercation with the rickshaw puller and damaged the rickshaw. Now the family is trying to collect 4,000 rupees to pay the owner for the damages. Arif is back at his friend’s house, in quarantine, and drinking again, say social workers.

Freeing prisoners during the lockdown has not been easy. Many are not being able to return home. The day Arif was released, a female inmate – a destitute mother-of-two – was released from a Mumbai prison and given shelter by a fellow inmate in her slum home. The two had not known each other until they were released from prison together. In Latur, in Maharasthra, social workers have managed to take 24 freed prisoners home in hired vehicles so far.

Inside the prisons, anxiety and isolation is rising among inmates. Many have rioted, demanding to be released. One person was killed and 28 injured in a prison riot in the eastern city of Kolkata (formerly Calcutta) in March. One reason is relatives are no longer able to visit them. “These visits are the only thing they look forward to and hope for. Cutting off contact with family members hurts inmates emotionally,” Madhurima Dhanuka, of Commonwealth Human Rights Initiative, told me.

Non-profits are asking governments to release sick inmates. Groups like Prayas, a field project of Mumbai’s Tata Institute of Social Sciences, are trying to help prisoners and their families by taking them home and providing them with rations and some direct cash transfers.

Although the top court wants to decongest the prisons, people are still being arrested and thrown into jails for defying the lockdown and other charges. “I reckon we have only been able to reduce overcrowding by five to 10% after releasing the prisoners. Our prisons are still so overcrowded that a disaster is waiting to happen,” Vijay Raghavan, project director at Prayas, told me.

That appears to have already begun.

Around the world, prisons have emerged as hot spots of infection. India appeared to have bucked the trend, until this week when 77 of 2,600 prisoners at Mumbai’s Arthur Road prison – it houses some of the most high profile convicts – tested positive for Covid-19. Also infected were 26 prison officials. One more prisoner has been infected in a prison in Satara district. “We are making arrangements of moving the prisoners to the hospital,” senior jail official, Deepak Pandey, told me.

Meanwhile, more than a month after he was freed, Arif is still trying to return home.

The REAL Exorcist: Vicar reveals how he took on a terrifying new role