Some UK theatres have begun advertising the dimensions of their seats in order to improve accessibility requirements for bigger Brits.

A raft of UK entertainment venues are now posting measurements for their seating online, including width and legroom, as part of a push towards ‘fat accessibility’.

It’s understood larger theatre-goers have complained that they can’t fit into seats designed for thinner body types, and are left uncomfortable and in pain – but have struggled to find accessibility information online.

It comes as comedian Sofie Hagen, 33, announced yesterday that they would only be taking their new tour to venues which already supplied this information, or had committed to add the information to their website on a permanent basis.

They have previously spoken out about being left in ‘excruciating pain’ in too-small chairs and venues informing them there are no adaptations they could make for them to be able to attend performances.

Among the venues which now share this information is Chorley Theatre in Yorkshire, which lists measurements for width, depth and legroom under a section on its website titled ‘fat accessibility information’. 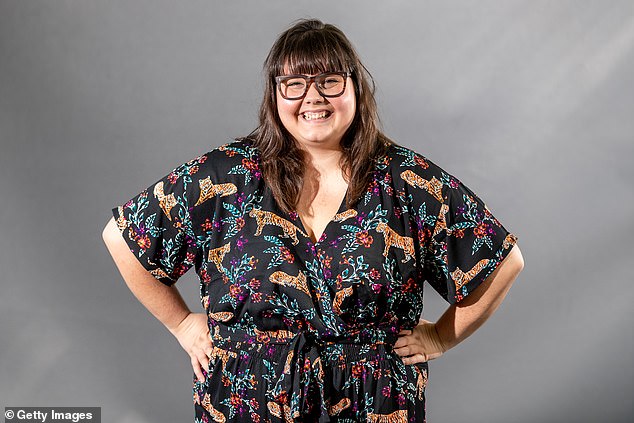 Sofie Hagen has previously spoken out about being left in ‘constant, excruciating pain’ by seats which are too small 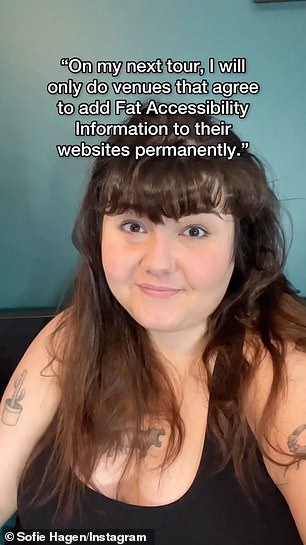 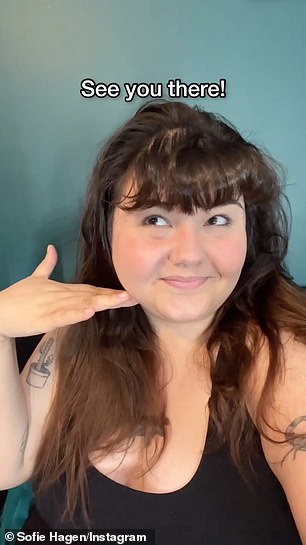 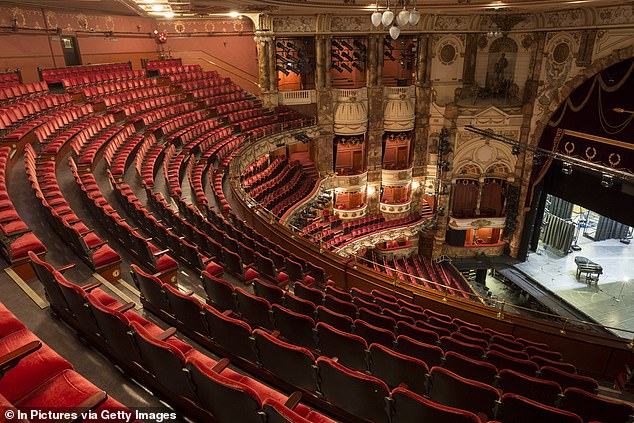 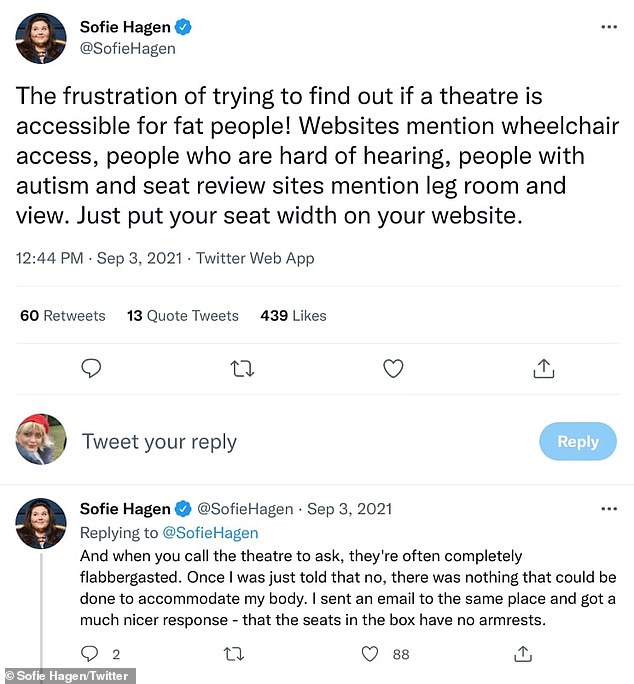 But other venues simply call the information ‘seat accessibility’.

Meanwhile, The Tiverton Community Arts Theatre website insists: ‘We are committed to being as accessible as possible in everything we do.

‘Raked seating is 43 cm wide, with liftable arm rests. Level seating is 40 cm wide but has no arm rests and seats can be detached for additional room.

‘Level aisle seating can also be moved up to 10 inches for additional space, and can accommodate wheelchairs.’

Leeds Grand Theatre lists on its website the dimensions for seating in its stalls, dress circle, upper circle, balcony, upper balcony and boxes under a section titled ‘What are your seat measurements?’

Other theatres understood to be taking part include the Old Fire Station in Oxford, Òran Mór in Glasgow, the Aberdeen Performing Arts centre, The Leadmill in Sheffield, The Unity Theatre in Liverpool, the Harrogate Theatre and many more.

Information on seat sizes is now available for Gulbenkian Theatre in Canterbury, Kent 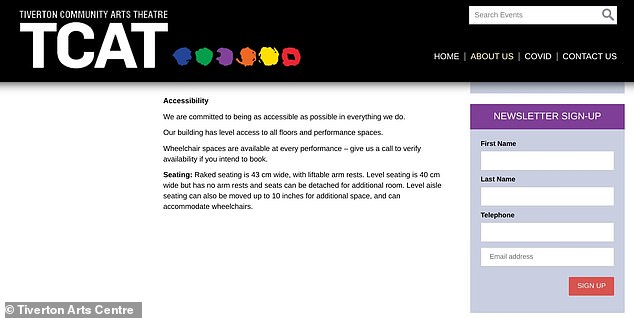 In a video posted on Twitter, Ms Hagen released a list of venues they will be visiting and wrote: ‘On my next tour, I will only do venues that agree to add Fat Accessibility Information to their websites permanently.’

Fans have thanked Ms Hagen for her stance on the issue.

Caroline said: ‘I’d love to see a bunch of comedians and performers getting together to do this kind of thing (pushing venues to get these details and other access info added to website in a clear and consistent way) so it’s not purely up to individuals who are touring.

‘I feel that audience members rarely get listened to because we ask for this sort of info all the time and nothing gets done. And it shouldn’t all be up to you, Sofie!

‘You do loads but I’d like to see more performers do it too, and post about it!’

‘You’ve already unlocked a new venue local to me that I never would’ve thought was accessible – but is! This is so important.’

Other comments included: ‘What a really nice move, if only more venues would do this very thing’ and ‘this is brilliant!’

Ms Hagen has been campaigning for more fat accessibility information for years after previously being left ‘in constant, excruciating pain’ after seeing a theatre show with seats they couldn’t fit into.

Queen 'will still conduct state opening of Parliament on May 11'