Home » World News » ‘There is a piece of me on that dirt’: Andrew returns to the scene the attack with the man who saved him

Denpasar: Peering into the site of the old Sari Club through a hole in its corrugated iron fence, Andrew Csabi knows a part of him will always be there.

“I can tell you I still feel there is a piece of me on that dirt, right where we were standing that night,” he said of the vacant block of land in Bali, which is used in the afternoons for parking cars. 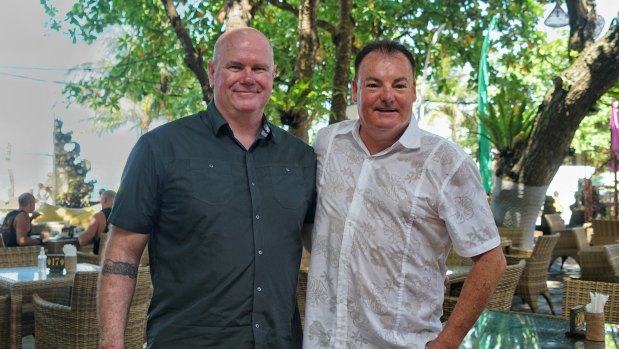 “I know I lost part of my life there. Even though I’ve regained most of it I’m still in that car park. My blood’s there, my DNA’s there.”

Csabi lost his left leg, part of his right foot and sustained other serious, permanent injuries as a result of a car bomb that tore apart the popular Kuta nightspot in 2002.

Now, as survivors and relatives of the 202 people killed in the Bali bombings return to mark the 20th anniversary of the terror attack on Wednesday, he has come back to the Indonesian island with the man who first rescued him that night.

Anthony McKay, a then Australian soldier who was on a short break during a posting in Malaysia, was also in the Sari Club when the suicide bomb was detonated and picked the terribly wounded Csabi out of the crater left by the explosion. 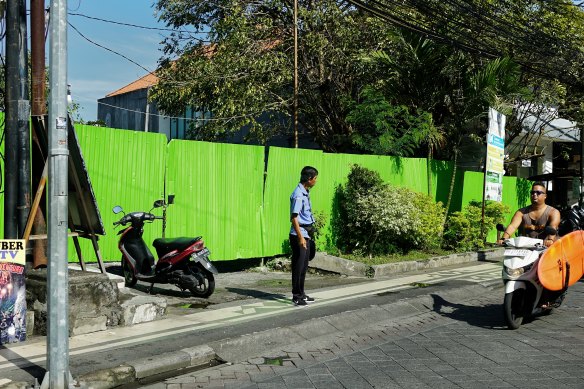 The site of the old Sari Club in Bali’s Kuta tourist district.Credit:Amilia Rosa

Close friends ever since, they have been on a scuba diving trip together here in the past week ahead of the anniversary.

More than 300 guests are expected at a commemoration service on Wednesday at the Australian government’s consulate-general in Denpasar. The Indonesian foundation of survivors and Indonesian police’s anti-terror squad will also release baby turtles and doves at a beach in Bali’s Nusa Dua in a message of peace and candles will be lit at the site of the bombings on Wednesday night.

Among those at the ceremony will be Danny Hanley, whose daughters Renae Anderson, 30, and Simone Hanley, 28, died in the bombings, and who has been back on October 12 every year since aside from the past two in which he could not travel during the pandemic. 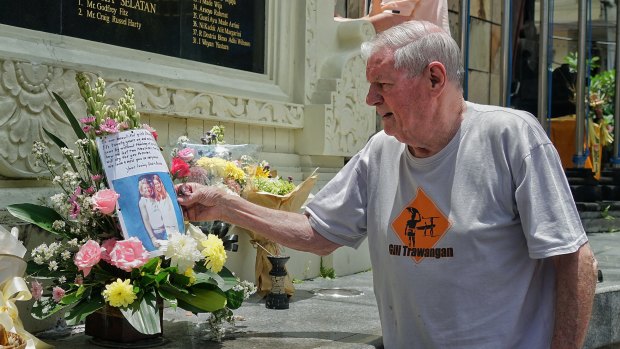 Danny Hanley leaves a photo of his daughters and a note at the Bali memorial on Tuesday.Credit:Amilia Rosa

In Bali on holiday with friends, Renae was killed instantly by the blast. Simone was the last of the 88 Australians to die, unable to be saved after 58 days in hospital in Perth, where she was treated by burns specialist Fiona Wood.

“Twenty years, it’s gone so fast. It never goes away but in 20 years there is a lot of healing,” Hanley said on Tuesday.

“Every year I come here and meet with another guy, Barry. We’ll go to the consulate for the memorial service and then we have lunch at Sanur. We do that every year.”

As victims’ relatives and survivors congregate at the Bali memorial, over the road the fence across the land once occupied by the Sari Club has a new coat of bright green paint, applied on Saturday for the occasion. 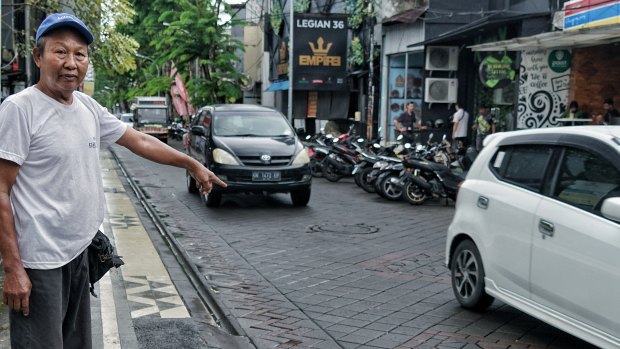 Made Kana points to the spot where the car bomb outside the Sari Club exploded.Credit:Amilia Rosa

Beyond that, there has been very little change to the plot over the years. Plans for a memorial garden, or peace park, have never eventuated despite the Australian and state governments pledging support to purchase the 1500 square-metre site from its owner. After an uproar at previous plans to build a restaurant there, he now has designs on a hotel.

Made Kana, whose home shared a wall with the Sari Club before being destroyed but whose family of seven escaped unscathed, believes something should be done with the land.

“I still hang out with my friends in front of the ex-Sari Club site,” he said.

“From time to time, looking at the empty plot reminds me of the incident. I wished they would build on it. Anything, the planned park, a restaurant, anything.”

Csabi is also content that the site is redeveloped and is happy to have the monument 30 metres away on the other side of Jalan Legian, Kuta’s main tourist strip.

He simply counts himself lucky that he is not among the list of names at the memorial.

He had been on holiday in Bali two decades ago with friends Glenn Cosman and Glen Forster after recovering from a major motorcycle accident and, like so many, was in the wrong place at the wrong time.

“We went riding bikes that day, saw Jimmy Barnes at the Hard Rock during the week and then we wanted to watch Bathurst the next day so we came into Kuta to have dinner and have a drink,” he said.

“We went to Paddy’s Bar then across to the Sari Club and the rest is tragic. But my two mates survived and I’m so grateful that the three of us as mates are still together, and then I’ve gathered another family.

“It’s going to be a pretty emotional day for everyone. I’ve been feeling the emotion building in the last few months and just to have the support of my mates and my family here means so much to me.”

Lobster diver, 56, is SWALLOWED whole by humpback whale before 60,000lb beast spits him out