Home » World News » 'This is how we welcomed 2019': Civilians killed in Houthi attack

A woman and a child killed and 16 others wounded after Yemeni rebels shell a residential neighbourhood in besieged Taiz. 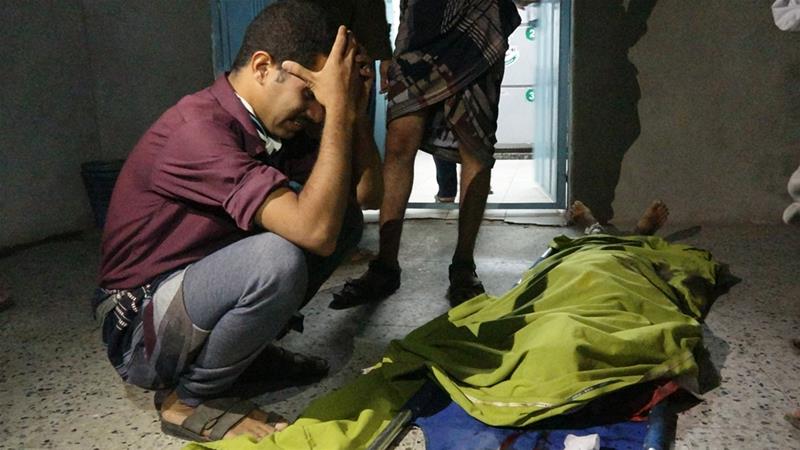 Taiz, Yemen – At least two civilians have been killed and 16 others wounded after Houthi rebels shelled a residential district in Yemen’s besieged city of Taiz.

According to residents and medical officials, the Houthis fired several mortar shells on Taiz’s 7th July neighbourhood late on Saturday killing an elderly woman and a child.

According to the sources, the injured, many of whom were children, were taken to nearby hospitals controlled by the government.

“The world and humanitarian organisations have turned a blind eye to what is happening in Taiz.”

Houthi rebels have besieged Taiz, Yemen’s second-largest city, for more than four years, with an estimated 200,000 civilians caught up in the fighting.

While most of the city has remained largely under the control of Yemeni government forces, the Houthis regularly attacked the city with artillery shells and sniper fire.

According to one resident who requested not to be named, scores of civilians had been killed by Houthi shelling in recent months and the rebels had tightened their grip on roads connecting the southwestern city with the capital, Sanaa.

Aid agencies have repeatedly warned of a humanitarian disaster in the city, documenting food and water shortages and hospitals struggling to function without access to basic medical supplies.

Missiles and gunfire a near-daily occurrence

Last month, Yemen’s warring sides reached a declaration of understanding on the situation in Taiz, following peace talks in the Swedish town of Rimbo.

Under the agreement, the first significant breakthrough in peace efforts since the war erupted in 2014, the Houthis were expected to ease the siege on Taiz and withdraw from the strategic port city of Hodeidah.

However, both sides have accused each other of violating the agreement, with the sound of missiles and automatic gunfire a near-daily occurrence for the thousands of civilians who still reside in the city.

“This group (the Houthis) only know the language of death,” Mohammed Al-Mayyas, a Taiz resident told Al Jazeera.

“Everyone knew before the start of the peace talks in Sweden that this group would not abide by any charters and it only understands the language of weapons”.

Yemen has been wracked by violence since 2014 when the Houthis stormed south from their stronghold of Saada and overran much of the country, including the capital Sanaa.

The conflict escalated in 2015 when Saudi Arabia and the UAE, who accuse the Houthis of being Iranian proxies, launched a devastating air campaign aimed at rolling back Houthi gains and reinstating President Abd-Rabbu Mansour Hadi’s government.

Since then, with logistical support from the US, the coalition has carried out more than 18,000 raids, with schools, hospitals and mosques frequently targeted.

According to recent estimates, as many as 85,000 children may have died of hunger since the coalition’s intervention.