Our team is dedicated to finding and telling you more about the products and deals we love. If you love them too and decide to purchase through the links below, we may receive a commission. Pricing and availability are subject to change.

You would think by the time 2020 came along, calling someone or something “the first Black *insert any occupation here*” would have ceased to exist. Yet, the Faced By Kareem HipDot collection is one of the firsts of its kind with a Black man influencer spearheading the beauty collaboration.

The line is part of the new HipDot Creator Series, a program that supports creators, and their ideas, for makeup collaborations. Now, having racked up a supportive following of over 20,000 followers across Instagram, Twitter and YouTube, Rogers is the first creator in HipDot’s series to offer up his artistry with a full line. He’s also one of the few Black male influencers to have a collab, period. The Faced By Kareem HipDot collection features an eyeshadow palette, a three-piece brush set, a face sponge and the Faced By Kareem Bundle (with a face mask), all priced between $8 and $50.

Everyone has a different story for how they discovered beauty. For Kareem Rogers, he didn’t fall in love with makeup because of a family member or a friend, but because he worked at a kid’s summer camp, creating costumes for the camp’s live shows. 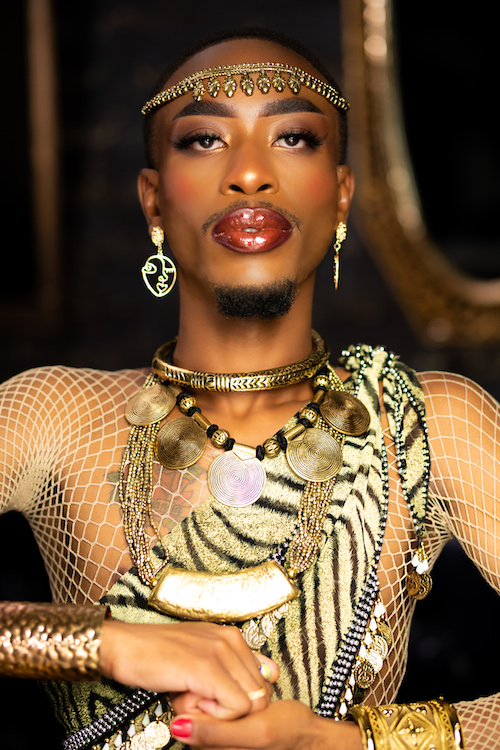 “[My director] realized we didn’t have any face painters or anything to do makeup for the kids,” Rogers tells In The Know. “She told me — I didn’t have a choice — she was going to buy a big bag of makeup and she wanted me to practice during my downtime on a mannequin and it went from there.”

“I was just looking at other people and I was like ‘I don’t see any Black men or Black boys doing makeup on YouTube,’ so that encouraged me.” 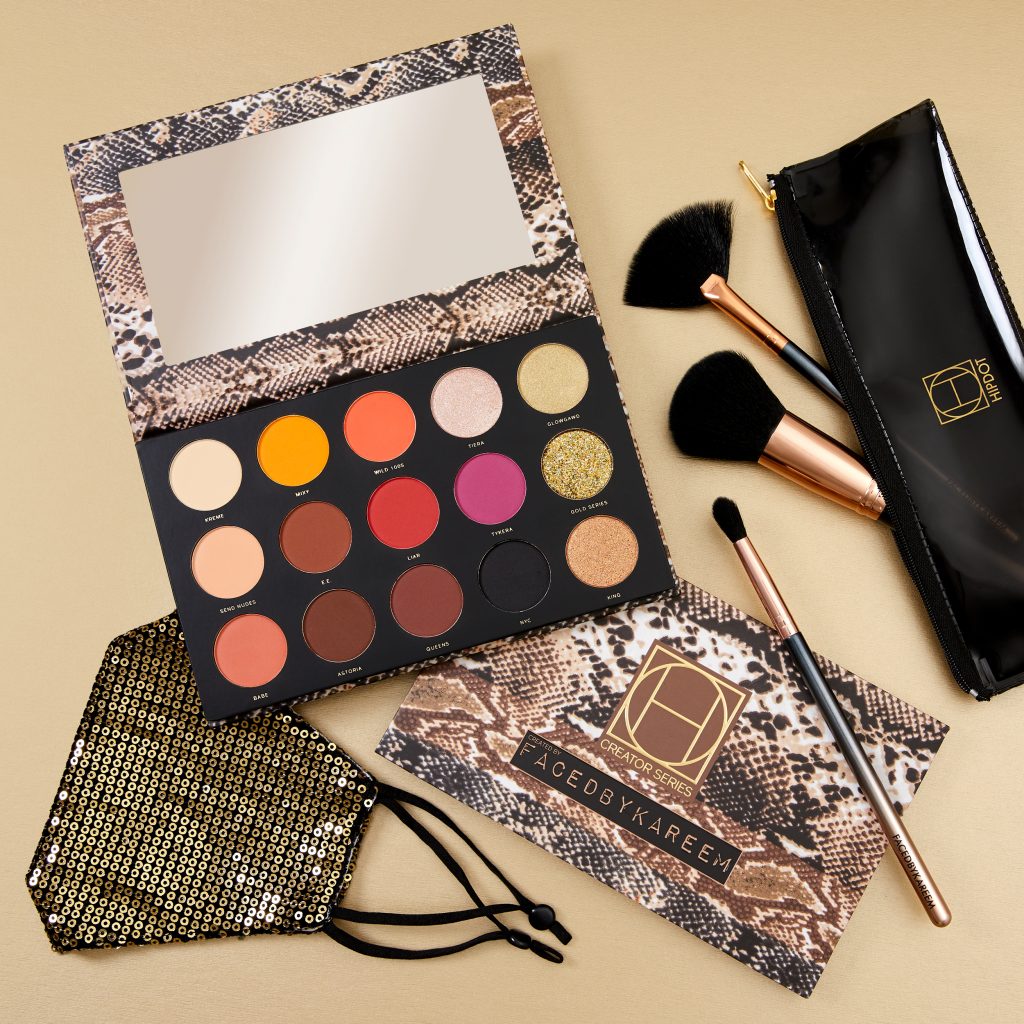 Rogers says he felt there was a lack of shades for deeper skin tones in the HipDot link. The 15-pan palette is exactly what he had proposed and submitted to HipDot after working on it for what he says is “the best three hours of my career.”

The Faced By Kareem Palette is special because it’s made for all skin tones. What’s more? It’s also a slight ode to the Jackie Aina x Anastasia Beverly Hills palette.

“With her palette, she definitely pushed the movement of inclusion, specifically making shades that would show up on the deeper, dark complexions, and overall it worked for everyone.”

The Faced By Kareem palette features everything from inclusive neutrals to bright shimmers. Plus, there’s a glitter that screams “Remember The Time” by Michael Jackson. Rogers intended for the palette to feature brown shades that could double as a bronzer, contour and brow powder for deeper skin tones. 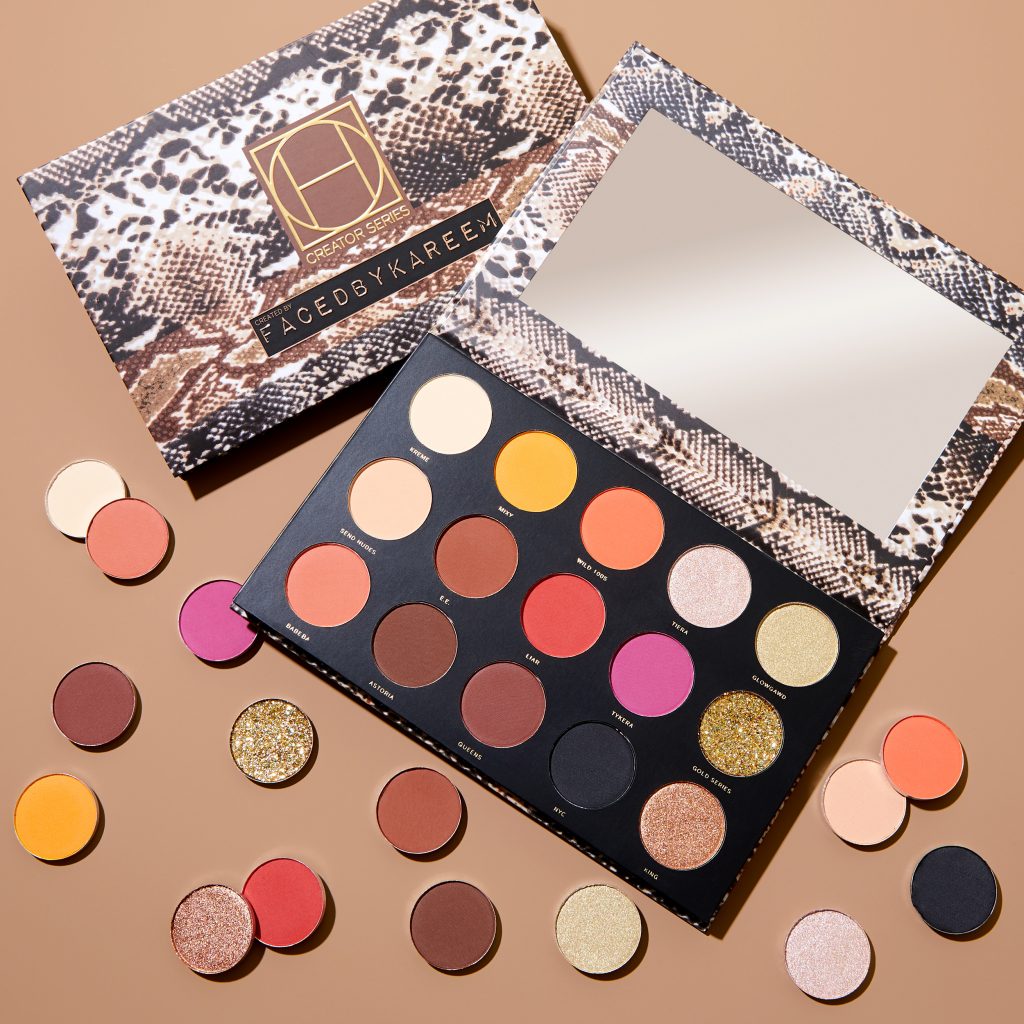 “That one specific brown (Queens) pairs well with all the sunset colors: Wild 100s, Tykera, it won’t take away from the undertone,” Rogers explains. “And that’s actually a shade I use as bronzer mixed in with E.E., which is going to be your average crease color for your neutral shades. And then Astoria you can use for contour.”

Though Rogers is achieving a career milestone, he explains that he finds it easier for white beauty boys to get more collaboration opportunities.

“Unfortunately, our caucasian makeup artists and beauty boys get their collaborations very easily,” he says. “And what I notice with theirs is that it’s really not personable to them. It’s more like the brand doing all the work and they’re just giving them the ‘okay.’”

Kareem says that being a Black beauty boy isn’t easy, especially one whose career in makeup began in 2016 but didn’t partner with brands like HipDot until 2019.

“I just want every artist who has that creative rut or feels that they’re not being visible [to know] your time is manifesting,” he said. “Whatever you put out there into the universe will definitely come back tenfold and just always believe in yourself no matter what.”

If you enjoyed this story, you may also like reading about how YouTuber Jackie Aina launched a self-care company.

More from In The Know:

Subscribe to our daily newsletter to stay In The Know

The post Kareem Rogers’ new HipDot line is history-making for Black boys in beauty appeared first on In The Know.